Stephen Harper and the Other Canada 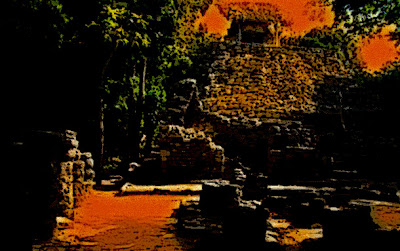 A few years ago, during my Indiana Jones phase, I was exploring some Mayan ruins in the Yucatan, when I came across a building with the sign of the owl carved into the rock...a witchdoctor's place.

And as I sat there a strange feeling came over me. Like something bad was about to happen. It was getting dark, the snakes were starting to come out. I couldn't wait for my brother to return so we could get out of there.

Later someone told me it was a place where it's believed young children were sacrificed. As their society collapsed, and their city was swallowed up by the jungle.

Which is sort of like the sickening feeling I had today when read this poll.(PDF)

Maybe it's a rogue poll. Maybe it just signals that voters don't want an election. Maybe the attack ads are working. Maybe Canadians believe the Cons when they tell them that Michael Ignatieff wants to tax their i-pods.

But if the trend is confirmed no amount of denial can conceal the writing on the wall. Stephen Harper is closer to a majority that he has been for a long time. And the progressive side is going nowhere. Two months from an election.

Then I read this story.

Since 2006 the Government of Canada has systematically undermined democratic institutions and practices, and has eroded the protection of free speech, and other fundamental human rights.

Canadian democratic institutions, civil society organizations, and human rights defenders have been weakened, marginalized and silenced. Their capacity to monitor and safeguard the respect for democracy, free speech, and other rights is in jeopardy. The quality and health of democratic life in Canada is under serious threat

And that bad feeling swept over me again.

Are we inching toward two Canadas, each with its own foundational principles? And if we are, can we find common ground? Across our history, Canadians have endeavoured to resolve problems by negotiating compromises. We’ve become known for these efforts, even when they have fallen short.

Because let there be no doubt whatsoever, if Stephen Harper gets a majority, with the help of this other Canada, he will not only rip the guts out of this country, he will blow it apart.

And what worries me is that so few seem to see the danger. We've come to believe our own propaganda. Canada is strong. When really we are fragile. Born of compromise not U.S. style confrontation. And nowhere is it written that a country will last FOREVER.

And what depresses me is that four years into a Harper majority, progressives will probably still be arguing over whether they should unite. Just like they are now. Except that by then they'll be screaming at each other like howler monkeys. In the ruins of what was once Canada.

And the saddest thing is that one day it will be so obvious that we should have banded together, recognized we were in an ideological war for the soul of Canada, and hit the Cons where it HURTS.

And if it is, we can run as fast we can, but there is no escape.

And it will consume us...

Or freeze us in our tracks, doing the same old, same old, as our country BURNS.

What I do know is that we have about two months to get our act together, attack the Cons harder than ever, and try to save what we can.

Or we might wake up soon in a country we don't recognize.

The writing is on the wall. Denial is death.

And nothing is FOREVER...

Michael Byers
is counting down to the launch of the "Salt Spring Forum" at 7:30 PM this Sunday, February 13, at ArtSpring. Lawrence Martin of the Globe and Mail will discuss his devastating new book, "Harperland: The Politics of Control".
February 7 at 7:20pm · LikeUnlike · ·

Who votes for the CONs?

• not parents that had national daycare taken from them
...
• not aboriginals that saw two treaties rescinded and killed

• not scientists that had their work muzzled by the government

• not anyone believing in freedom of information

• not anyone that wanted fiscal responsibility and transparency

• not anyone that sees the CONs spending more to deliver less

• not anyone that wanted to see the CPP improved

• not those that shook their head at terms like "ethical oil," "cancer is sexy" "build more jails to deter unreported crime" and "Hitler theory"

The world turned its back to Steve and Canada should too. A new pair of eyeglasses does not make the PM any wiser.See More
Friday at 8:13pm · UnlikeLike · 3 people