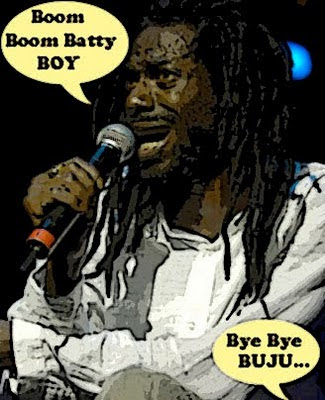 I have to admit I was disappointed when this homophobic thug, Buju Banton aka Mark Myrie, won a Grammy last week. But now I'm feeling a lot  better.

Jamaican reggae star and Grammy winner Buju Banton was found guilty on federal drug charges on Tuesday and could face 15 years to life in prison.

I don't usually celebrate a victory of the DEA over anyone eh? I think the Great War on Drugs is bullshit.

But a guy who made his name singing about how gay people should have acid poured on them. Or how they should be shot in the head:

A guy who was accused of taking part in a cowardly attack on a group of gay men that cost one of them his eye.

But was still let into Canada by our homophobic Cons.

Deserves what he gets.

You know what they say eh? An eye for an eye.

Or at least that's what his Christianist fans, in Jamaica believe.

When they are not blaming gays for what happened to their bigot idol.

Buju is being villified because he dare to speak out and sing against homosexuality which angered the powerful lesbian and 'gay' lobby which resides in north american and western european countries.

Homosexual groups ask for tolerance for their objectionable and deviant behaviour,yet they don't show such tolerance to persons who are against the homosexual lifestyle and speak out against it.

As if the DEA has a soft spot for gay people. And the Buju bigot wasn't caught on video licking coke off a knife.

Right. You know if it was up to me, I would have given him five more years for impersonating a Rastaman. Because I LOVE reggae music.

Now how did that murder song go ?

Yup. The way I see it justice finally caught up with a CRIMINAL.

Well as they say: "you do the crime, you do the time." His lyrics are quite telling of the culture of homophobia present in the Caribbean.Such hatred is disgusting.
I read the article you linked to in the post(the one in the Gleamer). I didn't see the part where his fans promoted the "eye for an eye" mentality. Or are you more so implying that their faith automatically renders them hypocrites? "The fire upon them" expression is used in dialect to say that God will judge them. I'm not too sure if that's what you based that statement on...

hi Retromus-ik...you know the worst thing about Banton is that he had the talent to be great, to spread the reggae message of one love and revolution, and set a good example. But he chose to be a hatemonger and a thug.
As for the "eye for an eye" comment I was just trying to be clever and failed. I was just making fun of the Christians in Jamaica who would pray for such a man, and are largely responsible for making Jamaica one of the most homophobic places on earth.
Because if Buju is a modern day Moses, I'm Jesus or Jason Kenney... :)