Stephen Harper and the Road to Nowhere 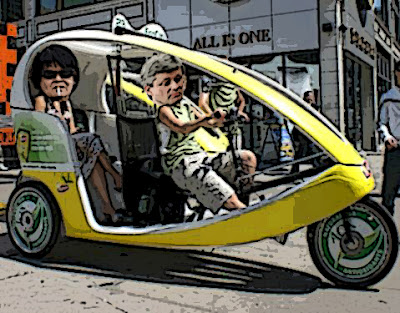 Well I see Bev Oda is riding in a more modest limo these days, for the sake of appearances. And that Stephen Harper is still pedalling away furiously claiming she didn't lie to Parliament.

If Oda does not resign, or Stephen Harper does not fire her, then the government will have turned its back on the basic principle of accountability to Parliament.

And I mean NOWHERE.

Then there is the question of motive, and whose fingerprints are figuratively on the document. Immigration Minister Jason Kenney has been quoted as saying that Kairos was de-funded because of its anti-Israeli investment policies, on alleged grounds of human-rights violations. But if that's his story, the decision not to fund the agency was taken either at Cabinet or PMO. This leads to a tick-tock, of who ordered what and when. Then you're getting into cover-up territory, a very dangerous place.

But at least Bev can smoke in her new limo eh? And at least we know who is in charge. Oh.My.Gangster. She must really know a LOT about this sordid scandal. And who really put the NOT on the document she signed.

Golly. Or should I say molly? Can we call her Prime Minister Oda, or do we have to wait until Harper is ARRESTED?

Because as Gerald Caplan points out it's all about him.

Whenever it appears that Stephen Harper may be closer to that elusive goal of majority government, along comes Stephen Harper to remind suspicious Canadians they’re dead right to be suspicious. That’s what the Bev Oda fiasco is really about.

And about his ideological war on all those who believe in Canadian values.

Never mind that many de-funded organizations were promoting maternal and child health, ostensibly Mr. Harper's big personal cause. Yet because they also pursue issues that Stephen Harper will not abide – human rights for Palestinians, women’s equality, climate change – they are anathema in his eyes.

And we are going to use all of the above to smear Harper and the Cons, until the shit runs down their faces, and they lick it up like chocolate.

Because he looks HIDEOUS in purple. 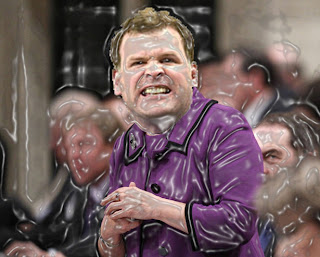 Oh yeah. We are going to use this juicy scandal to DESTROY those bully Cons. I don't just want them driven from office. I want them JAILED.

You know, yesterday I was so depressed about the political situation I felt like I was drowning.

OUCH. I mean NOT.

Now the Cons are drowning. In their own excrement.

Bev, Bev, are you sure you don't want me to call you a wheelbarrow?

Steve, Steve, how fast can you PEDAL?

This is why I haven't become too exorcised over the latest poll results. Caplan is bang on, Harper continues to be his own worst enemy, each and every time he has come close to majority territory he does something stupid, such as this. Now if the next round of polls mirror these latest ones, than it's loony bin time for me.

hi Kev...I admire your resilience. And like you I'm hoping that Harper has done it again. You know the funny thing is that the guy who tipped me off about his character flaws was Preston Manning. I read an interview years ago where he described how Harper, as Reform Party policy director, had a tendency to believe he owned the truth. And when disabused of that notion would sulk and stamp his feet like a prima donna.
Also, like you I am eagerly awaiting the next round of polls. They better be good or I'll be the one sulking and stamping my feet... :)

You know Simon,as much as I hate his political views, I actually have a great deal of respect for Manning, I consider him to be a good decent man who stands by his principles. I also read an article on how Harper has a tendency to as you say "sulk and stamp his feet like a prima donna." This article also talked about how he stabbed Manning in the back as well.

Speaking of being unprincipled backstabbers,our last 4 PM's, Mulroney, Chretien, Martin and Harper have all used the art of the backstab to oust their competition for party leader, paving their way to 24 Sussex. Ignatieff has employed the same tactics in his ouster of Dion, so if history repeats itself he should be PM someday

hi Kev...oh sure the old parson is a more moral person than Harper.But of course, that's not hard eh? ;)
The problem we have is that the progressive left is also on the road to nowhere. I'm afraid only the disaster of a Harper majority will force it to change its ways, and enter the 21st Century. And it will take a generation to repair the damage...