Bev Oda and the Con Mob 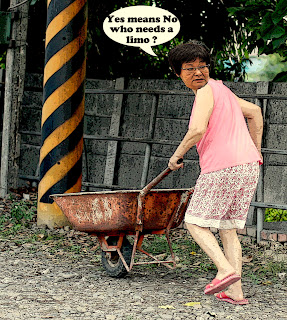 Oh no. How embarrassing. Remember how the other day I asked Bev Oda if I could call her a limousine?

To take her to the authorities handwriting experts investigating who ordered the hit on KAIROS, by adding that sinister NOT?

Well, what I really meant to say, was could I call her a wheelbarrow?

International Co-operation Minister Bev Oda told Parliament Monday that she was the person who altered a recommendation from her staff to deny funding to a church-backed aid group.

"The CIDA officials did forward a document in which they sought approval of the recommendation for funding of the Kairos proposal. But ultimately the decision to provide funding was mine — or, to NOT provide funding — was mine as minister of international co-operation," she said.

"I was fully aware that my decision was not aligned with the recommendation of the department."

So they can wheel her all the way to a public inquiry.

Gawd. No wonder she's looking over her shoulder eh? Because that's not what she suggested before.

"She said in committee she didn't know who put the 'NOT' in there. Now she's in a sense taking one for the team, saying I instructed them to do it." 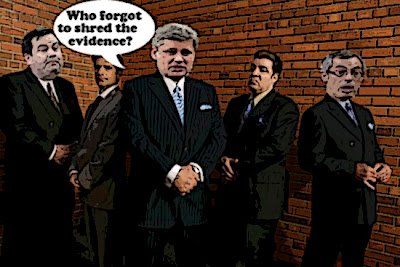 And what Stephen Harper likes to do to fallen women...

But that's the best part eh? Oda is just a tool who will do anything she is told. And I mean ANYTHING... for a limo.

But now maybe she can join the witness protection program, and tell us who in the Con mob ordered this savage hit on a gentle, decent, humanitarian, and very Canadian organization like KAIROS? And why?

Because if Canadians could get a glimpse of the sinister thugs in the PMO, and a sniff of their poisonous Amerikan-style ideology, the Cons would NEVER get their precious majority. They'd probably have to jail half the population just to stay in power.

Hmmm... you know I think I'm going to enjoy this sordid gangster movie. It's got everything eh?

A mob, a maniac, AND a useful idiot.

Bev, Bev, can I call you a supermarket cart?

Can I call you a wheelbarrel? BWYAAY h hah ahha h aahaha a loved this post

"jesus jones wrote:Posted 2011/02/14 at 5:58 PM ET
The lying and weaseling never stops with this corrupt Harper regime. Bev Oda initially told the committee, under oath, t...hat she had no idea who had committed the forgery of the CIDA document, she is ON THE RECORD stating that. Now she tells the HoC that she WAS the one who instructed 'someone' to forge the document!

That is perjury as well as forgery! And now she stands in Parliament to lie again by saying "In no way have I intentionally, or knowingly, misled the House, or the Committee." Whaaaattt?! You're on record lady, at the Committee, last December testifying you had no idea who had doctored the document. Do these Harper Cons think that they have lied in an untraceable alternate universe? Charge this Con already. Call the police investigation."See More

The Harper, government cut the funding to Kairos because they criticized the government's policies, and that is the bottom line.
...
Stephen Harper, is just doing what Stephen Harper does best. He is using his intimidation and bullying tactics to silence all NGOs into compliance, and is trying to send a chill into any group that would dare criticize his policies.

Bev Oda is just a Stephen Harper sock puppet, who could be Yoda's twin sister, just without any of the wit or wisdom."

♥
♥
♥
I've been saving this pic for the last year; I knew the time would come when I would get to use it.

A number of tweeters suggested the ads "jumped the shark," a phrase commonly used to describe a television show that has declined into utter absurdity.
http://ca.news.yahoo.com/critics-round-tory-attack-ads-20110127-145317-981.html
♪
♫
♪
Get your free CRUSH Steve Harper 2011 Calendar: