The Grammys: Canadians Steal the Show 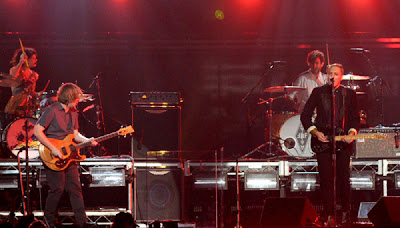 I thought it was the best Grammy Awards show ever. I thought the music was great, the staging was awesome, I liked the mixture of old and  young.

And I was so proud of our Canadian artists. 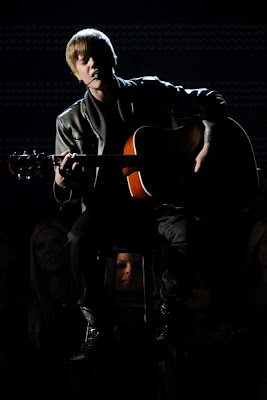 But of course for me, the highlight of the show was when Arcade Fire, from Montreal, Québec, ran away with the big one.

The Los Angeles Times may have been surprised.

The Montreal indie rock band's victory was one of the biggest upsets in recent Grammy history, with a visibly stunned frontman Win Butler thanking the Staples Center crowd before playing a second song at the ceremony simply, as he put it in his speech, "because we like music."

But I'm not. Because I've followed them for a long time, and they are simply the best live music act in the world.

For those in the Ukrainian Cultural Center on Friday, however, the band's win underlined what many already felt for the band but wouldn't have dared to expect on the Grammys' stage.

"When they played 'Intervention,' I stopped working and just watched, amazed," Carlson said of Friday's show. "The applause sounded like an arena in there."

Don't believe him or me?

Then check out this show at Madison Square Gardens...

I was hoping they'd play Rebellion to close out the show.

But hearing them say "Merci Montréal" at the end was even better.

French and English Canadians playing together. And conquering the world. It doesn't get better than that eh?

Even in the darkness of Harper's Canada some lights are still shining...

What's so *amazing* about Bieber, other than his appeal for chicken-hawks?

His *amazing* fundamental christianist views on a woman's right to choose?

He's most likely an homophobe, too.

hi deBeauxOs...Aren't you getting a bit carried away? I mean I don't like his music either, I prefer them older not younger. But he is Canadian, he is only sixteen, and I did think his Grammy performance was amazing.
I should also say that he is the most internet bullied person in the world, the object of the most unbelievable hate, so I'm not about to join that hate fest.
As for his ignorant comments about abortion, I very much doubt that he knew what he was talking about, and now he will learn.
Hopefully him and his fans can have a good exchange, and everybody can come out the wiser.
On the other hand if he refuses to retract and is homophobic, I'll take it all back... ;)