Stephen Harper and the Attack Ads 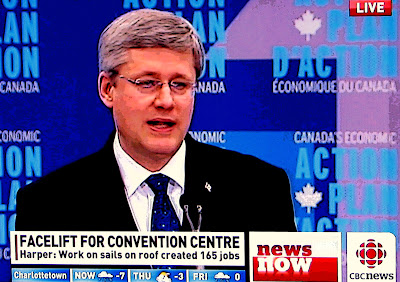 It was almost more than I could bear. There was Stephen Harper in beautiful British Columbia. Standing in front of a Porky Action Plan backdrop, with a touch of pink now added to soften up his image and appeal to female voters.

While some reporter asked if he'd heard about that awful hit-and-run, and whether he was planning to bring in stiffer penalties for the guilty.

Nobody asked about the Bev Oda scandal. Or why he was campaigning when he says he doesn't want an election.

And of course he refused to answer any questions about this poll.

The federal Conservative party’s recent attack campaign appears to have worked, as a new poll suggests Prime Minister Stephen Harper’s support is up across the country.

The latest Nanos poll — conducted between Feb. 11 and Feb. 14 — shows Harper’s Wake Up ad campaign that attacked Liberal Leader Michael Ignatieff and his party has resulted in a 13-point Canada-wide advantage for the Tories over the Liberals, according to poll author Nik Nanos.

Because then he'd have to pretend he doesn't care about polls. When in fact the smell of a majority has him drooling so much he has to carry a roll of toilet paper in each pocket.

Or remind people that attack ads work. Because some progressives just might start wondering why they are lying there taking it, instead of fighting back.

I can't do that eh? Even when I was a skinny teenager, and before I took martial arts, I understood that it was better to lose a fight, than roll up like a hedgehog, and let the bully kick you like a ball.

Because that way you could never hurt him, or EVER expect to win.

Stephen Harper is the worst bully in Canadian history, and unless him and his foul Cons are defeated they will DESTROY this country. It's that simple.

As is the choice facing us. We can choose to surrender.

Or we can choose to fight...

Never has a country been murdered so easily.

What a surprise it must have been for motorists and pedestrians in Gatineau, Que., to see the Prime Minister's motorcade come to a screeching halt, and then to see Stephen Harper, his son, Ben, and his wife, Laureen, jump out of the car to chase a turtle off the road. A cyclist had been trying to keep cars from running over it.

Mrs. Harper, who was raised on a farm in Alberta and is comfortable around animals, finally was the one (not the PM or the RCMP detail) to pick it up and move it.

As the person who actually came to the rescue of the turtle, I'd like to clarify a few things.

First off, the Prime Minister, his wife, son and entourage were returning from Harrington Lake, with their convoy of seven vehicles, in the Gatineau Park.

The only turtles you'll find in Gatineau are in pet shops and on the candy shelves of depanneurs.

Second, when I indicated the convoy should slow down, all seven vehicles stopped after they had safely passed by the turtle. As the security detail for the Prime Minister in a remote area, it made sense the RCMP did not get out to move the turtle, to ensure the area was secure instead. This coming from a cyclist who had originally been waving a large stick at the convoy to slow it down as it approached the turtle.

Third, Mrs. Harper never actually lifted up the rear of the turtle, as it had begun to move on its own power when everyone approached it. A little less dramatic then the article implied.

I do appreciate they slowed down to avoid injuring the turtle and stopped to offer assitance. I just wanted to provide clarification for what was an interesting evening for me and the local wildlife.