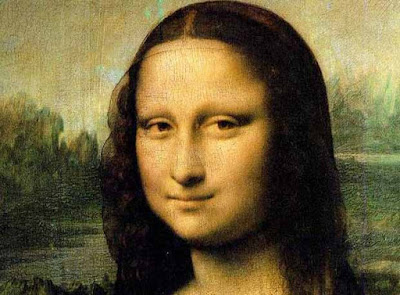 A male apprentice, long-time companion and possible lover of Leonardo da Vinci was the main influence and a model for the Mona Lisa painting, an Italian researcher said.

The apprentice Gian Giacomo Caprotti, known as Salai, worked with da Vinci for more than 20 years starting in 1490. Mr Vinceti described their relationship as "ambiguous" and most art historians agree Salai was the artist's lover.

Several da Vinci works, including St John the Baptist and a lesser-known drawing called Angel Incarnate, were based on Salai, Mr Vinceti told a news conference at the Foreign Press Association. These paintings show a slender, effeminate young man with long auburn curls

And I must say after looking at the painting of St John the Baptist... 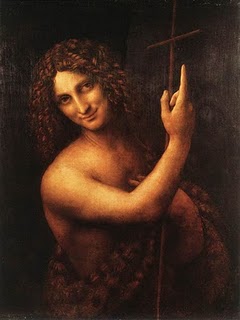 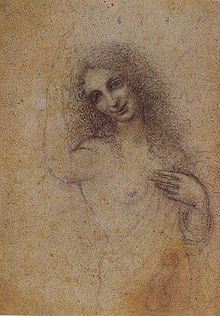 And reading more about Gian Giacomo Caprotti, and how he was no angel.

Salai stole things, broke things, lied, and was generally a devil; if he were a mere student or servant he would have been fired. Instead of punishing him Leonardo showered him with finest of clothes...

But still lived with Leonardo until the artist died. And inherited half his estate.

I wonder if Leonardo and Salai weren't sharing a private joke, which has now stretched through the ages.

Of course, that doesn't really change anything. A model is just a model, and the genius is in the painting.

But gay history has been hidden or buried by bigotry. Some colours have been left out of the human tapestry. So any little coloured thread counts.

That's one of the reasons I blog. To make sure that never happens again.

But as soon as I get hold of one of these gizmos.

And let nobody forget it...

I heard Da Vinci was gay many years ago but havent really thought bout Mona Lisa has any relation to his being gay! Indeed this story is just one g'd example of so many gay ppl owning the amazing talents!

hi ur merit...yes gay people have contributed so much to the history of humanity, which makes the fact that they are still so persecuted even more disgusting. On the funny side, that other gay genius Michelangelo was alive at the same time, and both him and Leonardo were extremely jealous of one another. They were always squabbling over commissions and pieces of marble. I guess some things never change... :)

back in the day homoerotic activities were seen as something you did rather than something you lived, modern "pride" fuelled rainbow fests hadn't been invented yet