Two More Good Reasons Not To Vote For The Green Party 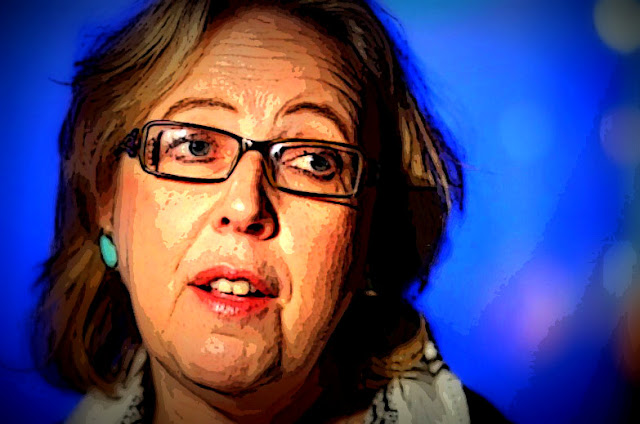 I'm starting to feel sorry for poor Elizabeth May. She is Canada's most popular leader, and this election was supposed to be her election.

The other day she told Vassy Kapelos that she had to save the whole world.

But who will save her Green Party?

When it has been battered by one scandal after the other, and there are now two more good reasons no progressives should vote for it. 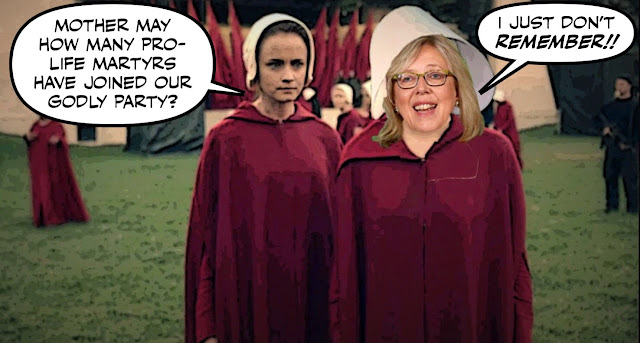 Starting with the strange case of the two candidates who can't remember being anti-abortion.

A candidate for the Green Party has said he "doesn't remember" expressing anti-abortion views on at least two Campaign Life Coalition questionnaires, or asking would-be Conservative party voters to consider supporting him because of his abortion views in a Facebook post from 2015.

When asked about a post that laments the ready access some women have to abortion, another candidate for the party said she doesn't recall making those statements on social media.

But are now miraculously both pro-choice and still running for the Greens.

And since both May and party officials claimed that any anti-choice candidates are weeded out during the selection process, one can only wonder how many others there are, ready and willing to join the Cons and vote to restrict the rights of women.

But if that is disturbing, this is even more bizarre. 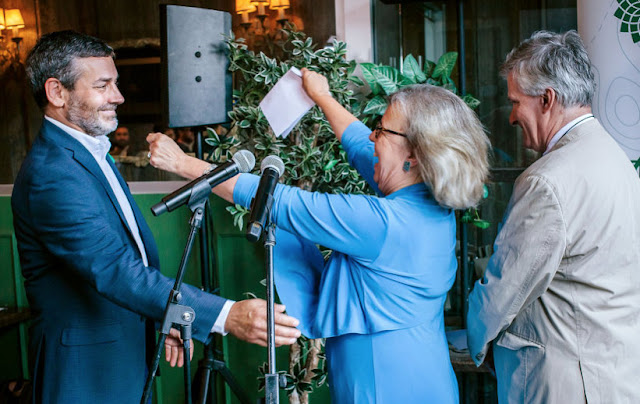 On the night before the federal election kicks off, the Green Party of Canada said it would not stop its members from pushing for Quebec separatism in parliament

With a Montreal area candidate, Pierre Nantel, making it clear where he stands on that issue.

Nantel, who is running for the Greens after he was booted from the NDP for secretly meeting with Green Leader Elizabeth May in August, told the radio station that he would vote to separate if there was a sovereignty referendum in Quebec.

Speaking in French, he said “we should separate quickly.”

In a statement to the Star Tuesday evening, Green spokesperson Rosie Emery said any MP representing the party would be allowed to espouse separatist views because the unity of Canada is “not one of the party’s core values.”

Which can only make one wonder whether this is the Green Party or the Bloc Vert?

And what's to stop its members from joining forces with the Bloc to prop up a Con minority government? 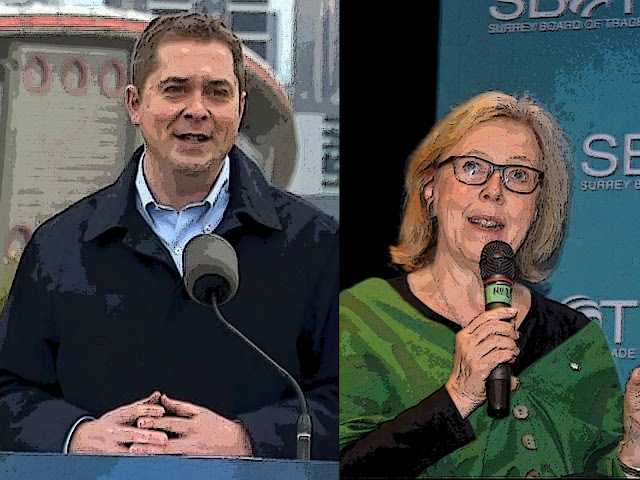 And sadly the answer is nothing. The risk is just too great.

The Greens are just not ready.

And no progressives should vote for them...

I'm really convinced that this is a foreign-funded coup to break up Canada and sell it off to the highest bidder. Wouldn't be the first time a subversive group masqueraded as something "benevolent" like an ostensibly environmental-oriented party but was really acting as a fifth column. She truly is Canada's version of Jill Stein.

I don't know where people get the idea that Liberals and their supporters are "progressive". The Liberal party are neoliberal corporate shills who don't put the people first. Same goes for Weak Andy and his band of dismal fascists.

Saboteur in activist's clothing. Lizzie might not be directly connected to Putin but her dark-horse campaign is mounting the same tactics. This all smells very familiar, and it stinks.

OK Dmitri. "Both sides are the same" right? "Neoliberal corporate shills" -- yup, you've got your tankie memehead keywords down pat, comrade! What's next, a Walk Away hashtag? What's Canada's equivalent, Come From Away (to siphon votes)? I know, why not press Julian Assange to release Justin's emails! That'll bring about the revolution ASAP! We have to burn the Kanata village in order to save it! FFS...

Add one more reason not to vote for the Green Party: Petty high school politics. May said this morning at campaign launch that she "really likes" Justin and Sophie but that she's "really mad at him." So mature. GTFO.

greens had a very bad effect in Germany, lets not try it in Canada

Simon, thank you for keeping this blog going!
My main concern is that the MSM is undermining our democratic process, and because they control the message, they are never seriously called out.
Could we, the citizens start by giving grades to the journalists? I would start by giving P. Wells and A. Coyne an F, as they are both being paid by their employers to elect Scheer, as well as they each have obvious personal biases against Trudeau, which prevents any idea of fair reporting.
I would give Evan Dyer a B for fair reporting of India trip, and a fairly unbiased reporting style.
Most of the voters are not aware that the Globe and all Postmedia have already decided to support the CPC, before any platforms revealed. Can Social Media help this issue?
Mary Wright.

Ezra Levant gets a Z-minus. Then again, he's not really a journalist. More like a sentient tumor.

Independent journalism is where the actual-factual quality is happening right now. I like Dale Smith at Routine Proceedings, and the National Observer. Susan Delacourt and Chantal Hebert at the Star are pretty good. Tabatha Southey and Andray Domise should have hosted the Maclame's debate, not Paul "I put the 'Paul' in Appalling" Wells. Podcasts are emerging as a new and more representative form of journalism that cuts around the Con M$M. Follow Ishat Reza, Neil Waytowich and Ed the Sock (yes, that Ed the Sock). I also like Max Fawcett and Markham Hislop for general politics stuff and a sanity check on the increasingly cultish Alberta energy debacle. I don't know how accurate their seat modeling is, but there's a couple of guys named Robert Martin and Evan Scrimshaw who have a website called Lean Tossup, and a podcast worth your while. Evan seems to be mostly interested in various sports handicaps but does political predictions and analysis too.

On Twitter the go-to accounts I look at even though I don't have an account of my own are "Diane Marie Posts" (she does Daniel Dale-quality fact checking as a hobby -- someone really should be paying her for this) and former ONPC staffer turned lefty/liberal-by-default, LGBT/HIV+ activist Mike Gibbs. A Métis activist and writer who goes by the name of "Sunnshiiny" is bringing all the receipts for the IDU and Canadian evangelical/dominionist movement's agenda that's backing the federal Cons and in particular Kenney's emerging fiefdom. She's in Alberta, as is Diane-Marie.

Bob Fife's grade should be a milkshake or egg in the face. Cousin Coyne needs therapy for his family issues. I'm eager to read his review of Margaret Trudeau's one-woman show, said no one ever. But you can read this one which is far more worth your while.

Hi Jackie....I don't think the Greens are getting their orders from Putin, although I'm sure he'd like to see them do well, so they can split the vote. I just think that they attract some of the wackiest people in Canada, and some of them are quite conservative...

Hi anon 12:25....You know I used to say things like when I was a freshman at McGill, but then I grew up and adapted to the Canadian reality. Later I voted for the NDP, but now I support the Trudeau Liberals because they are the only ones who can defeat the Scheer fascists....

Hi Mary....You're welcome, I will try to keep this blog going, although I'm very tempted to forget about it for a while and spend more time on Twitter. It's so much easier and I get so much more encouragement there. Now as to your feelings about the media I feel exactly like you do. They are undermining our democracy and are absolutely shameless. I also like your idea of grading them, so I will see what I can do. I will add David Akin to the F crowd, and I agree that Evan Dyer deserves credit for acting like a real journalist...

Take a break from corporate media. NBC is bad for the brain. Your links are from 2018 and 2017. The ruskie hysteria has since been shown to be mostly manufactured.

Hi Simon,
Don't give up on us!
Not all of us are on Twitter.
I don't always comment, but please know I always come here. Your Blog is my News Daily, when it comes to Canadian politics.
Without you, it's a media desert out there, for a non-Con and a person who's pretty damn gratified with the government we've got. But, It ain't perfect they say? I say, compared to what! (if I look around, we're the best-est, luckiest country in the world.

Hi Brawnfire....Don't worry I'll never give up on you and all my other readers. And I certainly will never give up,on Canada. But I will have to reduce my blog posts a bit during the election, as I just don't have the time or the energy to do all the things I want to do. I need to produce some videos and they are very time consuming, especially since I have a new editing system that is so complicated I might be forced to read the instructions. 😉 So I might miss a day or two but I'll be here all the way to the end...