Andrew Scheer and the Enemy of the People 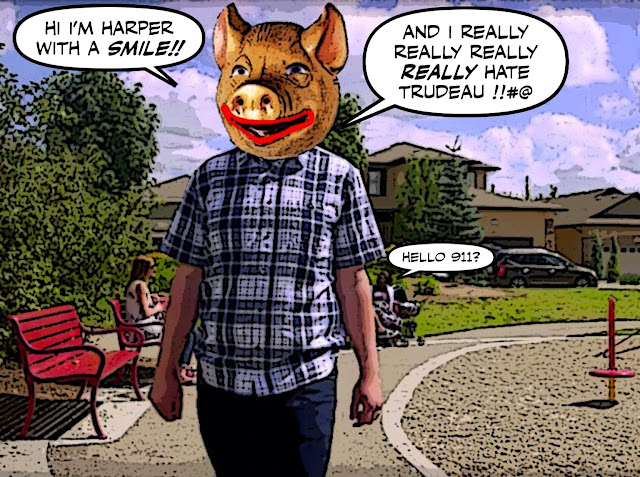 Ever since he became leader of the Cons, Andrew Scheer has called Justin Trudeau all kinds of ugly names.

But now, believe it or not, Scheer aka Schmear, has outdone himself.

And come up with an even uglier name to call Trudeau. 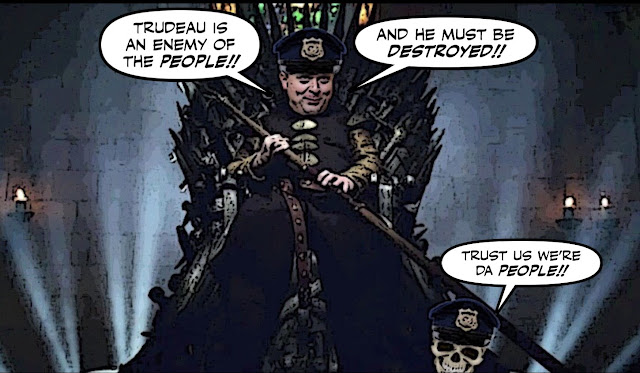 Now Trudeau is an enemy of the people.

“To Justin Trudeau, you are the enemy: the commuter, the office worker, the hockey mom, the retired senior. Those are the people getting dinged by this carbon tax, that’s why it’s unfair,” Scheer said.

He also repeated the line that the carbon tax will force Canadians “to pay more for everything.”

Which couldn't be more disgusting, and says more about Scheer than it does about Trudeau.

For firstly, it's just another one of Scheer's Big Lies... 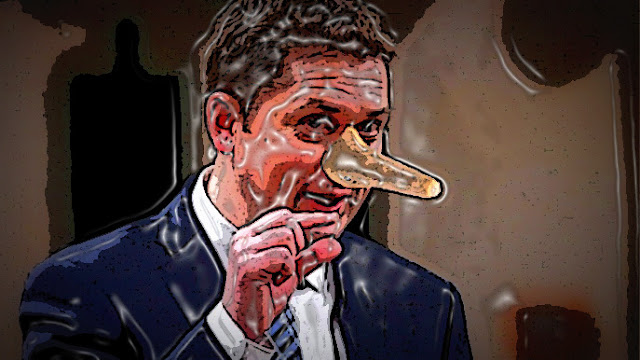 Most Canadians will get more money back than they pay in carbon taxes.

Secondly, isn't fighting climate change worth anything for those planet burning Cons?

And lastly but not leastly, what kind of Canadian politician would call an opponent an enemy of the people? When did that become normalized?

Doesn't Scheer realize that calling someone an enemy of the people makes him sound like a dictator or a Big Brother... 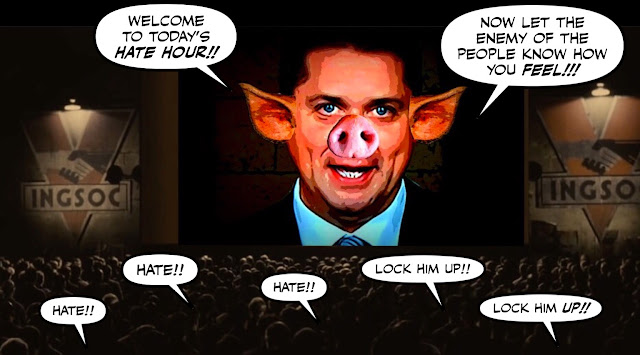 Doesn't he realize that his vicious Republican-style attack ads could incite violence against Trudeau, who already gets more death threats than any other prime minister.

What are Scheer and his ex Rebel campaign manager Hamish Marshall thinking?

Have they no moral compass whatsoever? Will they do ANYTHING to win?

It's both horrifying and depressing, but there is also some very good news.

It still looks like the creepy Scheer will never be prime minister.

In an election held tomorrow, 38% would vote for the Liberal Party, 31% Conservative and 16% for the NDP. These numbers are similar to the levels of support each party found the last time Canadians went to the polls. Regionally the Liberals hold a 7-point lead in BC, a 10-point lead in Ontario, a 17-point advantage in Quebec and a 45-point lead in Atlantic Canada.

The Abacus numbers are not quite as good as the latest Nanos ones.

But the pollsters didn't include any numbers for Maxime Bernier's People's Party, which is eating into Con support.

And the trend is equally encouraging... 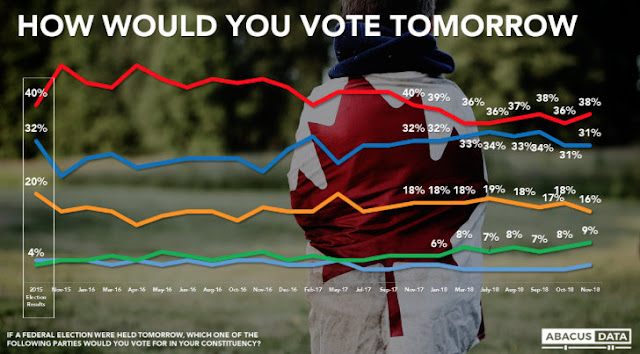 It seems that most Canadians don't like creepy religious fanatics, misogynists, racists, and homophobes, who call their opponents "enemies of the people."

And then blame them for debasing political discourse in this country... 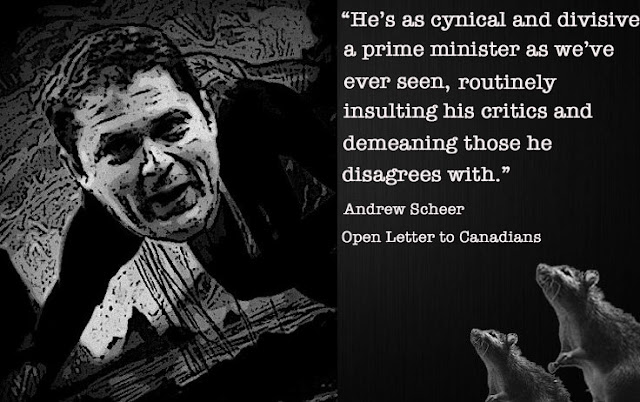 Which again couldn't be more disturbing in a Big Brother way. And again raises all kinds of questions:

How long will Scheer and his Cons be allowed to turn the truth on its head? How much longer will they allowed to spread "fake news" to inflame their rabid supporters, and pleasure their oily masters?

When will our mangy media stop normalizing that kind of appalling behaviour?

Who are the real enemies of the people?

And of course, my favourite.

How soon can we finally get rid of them, and make Canada Canada again? 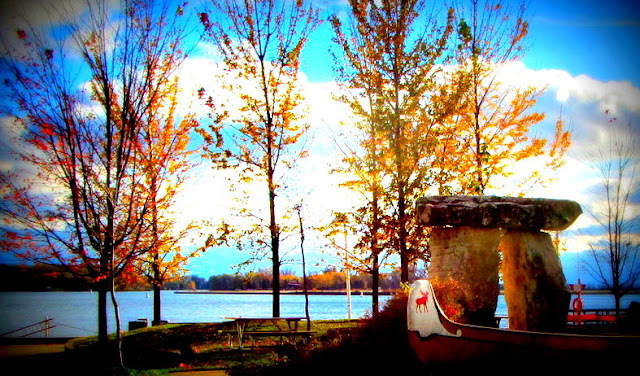 Still waiting for someone anyone except a few voices on the Toronto Star and Simon to call them out.

Scheer Insanity could go full grassy-knoll "duck hunt" against Trudeau, and the M$M would still have a "fair and balanced" debate about whether Trudeau was uncivil and divisive. Maybe even shrill and overprepared. Consider the vomit-inducing likelihood of a bit-part actor like Andrew Coyne or Don Martin in the Cronkite/Mansbridge role:

"Justin Fitzgerald Kennedy was no saint; he was an out-of-touch globalist elite who probably put arugula on his Dijon nothingburger a few times in his life, and he shouldn't have delved so deep into identity politics at the expense of the economically anxious white working class. Oh, and how about those mom jeans -- er, pant suits -- er, Indian pajamas? Or pink T-shirt and flashy socks. In fact, according to our panel of fashion experts at 'Power & Politics,' Justin was practically asking for it, considering what he was wearing that night..."

As though that wasn't bad enough, the whole country would be subject to Ezra Levant's running commentary on a heavily-edited version of the viral Zapruder cell phone clip. It wasn't Andrew Harvey Oswald; it was an ISIS terrorist from the caravan named Any Random Muslim. Or Jim Acosta, or a crisis actor who injected Big Pharma marijuana that he got from the Soros deep state. "Truth is not truth, and what you are seeing is not what is happening." This message brought to you by the letters GRU, Deco Labels, Ontario Proud Buck-a-Beer, and CBC: The Conservative Bothsider Channel.

I could have sworn your 2nd last graphic was a description of Harper, Simon. Scheer's Trumpian act will only insult the intelligence of most Canadians, they have to know that or are they as dumb as their base? I think not.
I believe they know that the only way they can win is if JT is out of the picture and for that Scheer and Ford should be charged with attempting to incite violence against our PM. There has to be lines you cannot cross and laws that deal with those who do.
We've seen how Trump has incited his base with the would-be bomber but luckily, he was a Trump supporter, too dumb to build a bomb that would work. However, give a dummy enough chances and they will make it work(hopefully while they're building it).
The true enemies of the people are Scheer and his ilk and Canadians will have their chance next fall to show them that their spiteful brand of politics are not welcome in Canada.
JD

Android Sneer the destructive Dalek apparently feels the need to out-killer-robot Mad Max, because his own NPC base has blown their circuits after two years of Hamish's programming marathons and has taken to calling him a "globalist cuck" and "Justin Bluedeau." Meanwhile, ever the extrovert, Trudeau himself clearly still fancies a friendly crowd-surfing expedition even in the cold weather, and has said on a number of occasions that he bristles at the heavy security measures and has felt this way ever since he was a kid. But whether he chafes or not, the rhetoric has escalated to such levels of Scheer desperation that the RCMP either needs to enclose him in bubble wrap until next year, or just keep him home and have him make public appearances via hologram. It worked for Princess Leia; perhaps it'd be a good idea for Obi-Wan Trudobi if Canada is to retain its new hope!

Scheer is certainly in good company with his "enemy of the people" propaganda.... Trump, Hugo Chavez, Goebbels, Stalin, France during the Reign of Terror. Depending on the circumstances it seems to be a reasonably effective propaganda tool but frames the mindset of the user at the same time. If history is any guide the phrase certainly has nothing to do with helping the working class.
RT

Hi Steve...Yes it's outrageous, I have been denouncing the Cons for YEARS and they are still HERE !!#@. 😉
But yeah, the media does need to take a closer look at the Cons and put them in a wider historical context. The new Cons are not in sync with our values, and are more American than Canadian...

Hi JD...I consider that graphic to be one of the most chilling ones I have ever made. For it shows that the Con gollum Andrew Scheer is now criticizing Justin Trudeau, for doing what Scheer does all the time. In yet another Big Lie that would impress even Goebbels. As I keep repeating, if we normalize that kind of behaviour our democracy doesn't stand a chance, and we'll go down the same road Trump took America...

Hi Jackie...It does seem that Scheer has been feeding his Rebel-like monsters, and like in every good horror movie they are now turning on him. So he will have to crank up the crazy stuff or they will abandon him for Mad Max. I notice that almost all the attacks on Scheer in the comment sections of the ratty Rebel, now end with a threat to join Bernier. I like the way things are shaping up, and all Justin's hologram has to do, is watch them kill themselves. Now THAT'S a happy ending...😎

Hi RT...when I hear the word's "enemy of the people," I see a fascist gulag and a firing squad. And coming from the sinister chipmunk Scheer really is the limit. Any more of that in the dark month of November, and I'll be forced to cling to my own sanity with both hands, like just about everybody in this country. God help me, I need some Xmas lights therapy...😳

Hi Jackie...What you say is true and chilling. Not only has this country been infected by some strange political virus, our discourse is becoming more violent and vulgar. I'm willing to put up with the vulgarity, even though it grosses me out. But the violent rhetoric needs to stop now, or our election campaign is going to look like a horror show, and who knows what monster might emerge from the darkness. ..

"enemy of the people" is one of those "catchy" phrases that some times work.
we have seen trump use if successfully and if it works for dtrump, why not for scheer. This phrase will come back time and time again because that kind of phrase works.
repeat it often enough some will start to believe it and at least it will run through their minds when they are in the voting booth when they see the Trudeau name. The federal Liberals need to find a nice "cathy" phrase to tag to scheer.

We need to remember Trump's base is approx. 35 M and could be re elected and ditto for Hitler. In my opinion people like scheer and ford are in a similar category.

Simon, you are right that the current Cons are a very different animal than the PCs or Tories of old. (Both Tory and Liberal governments have done horrible things to Indigenous peoples). But even Caroline Mulroney, who is of the old PC heritage, and who speaks French beautifully, is going along with these brutes, except for some token protests.