One More Reason The Cons Will Lose The Next Election 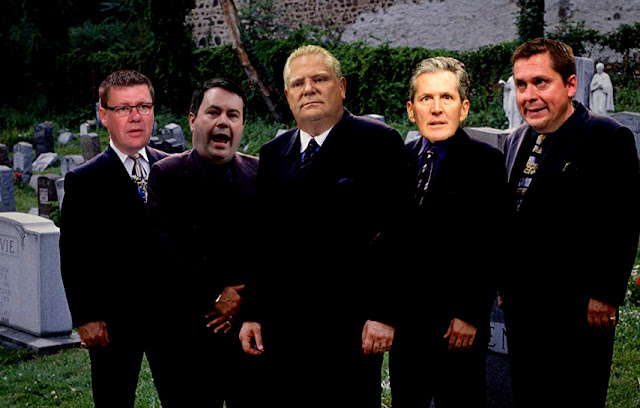 If you remember, when we last left Andrew Scheer he was riding with the notorious Ford Gang, the ugliest group of Con climate change deniers this country has ever known.

And although I thought that Justin Trudeau's carbon tax rebate might make Scheer reconsider stealing money out of the pockets of Canadians, I was wrong.

He's doubling down and getting Boss Ford to endorse him as Canada's next prime minister.

Justin Trudeau’s carbon tax will only make life more expensive for Canadians and will do nothing to protect the environment. Proud to have Premier @FordNation’s support as we fight Trudeau’s destructive new tax on everything. pic.twitter.com/fQsO7hXa1e
— Andrew Scheer (@AndrewScheer) November 12, 2018


But sadly for Scheer, his anti-carbon tax crusade will almost certainly mean that he will never be prime minister.

For to do that he needs to get more seats in Quebec, and this scene in downtown Montreal on the weekend, tells me he won't. 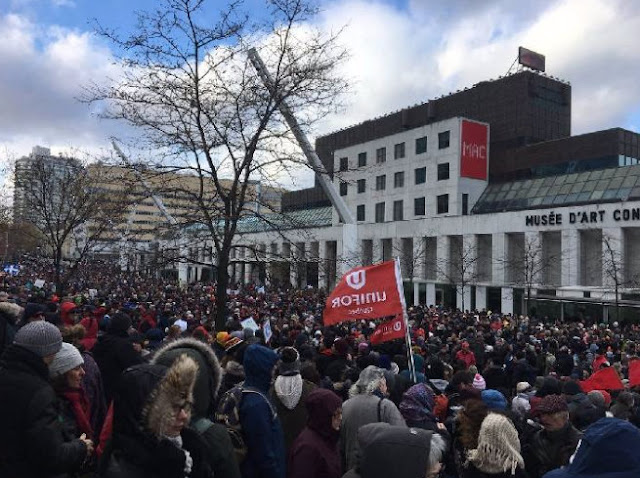 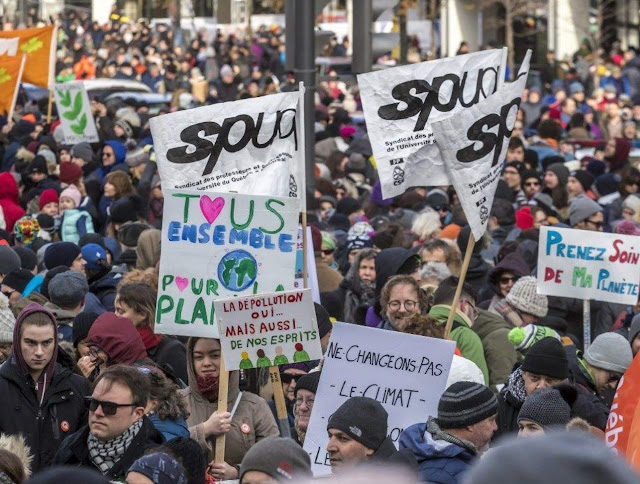 Not when 50,000 people turned out on a bitterly cold day to demand that more be done to fight climate change.

Tens of thousands of protesters marched through the streets of downtown Montreal on Saturday with hope, desperation and urgency, calling on elected leaders to act now to stop climate change — or they will be held responsible.

And as Chantale Hebert writes, that demand for action on climate change will shatter Scheer's dreams in Québec

Some of the activism and the passion that for so many decades attended the debate over the province’s political future has shifted to the environmental front.

It is already impacting the priorities of the rookie Coalition Avenir Québec government. And it could cost Andrew Scheer’s Conservatives any hope of gains in Canada’s second-largest province in next fall’s federal election.

In Quebec, the anti-carbon pricing platform Scheer has been spending the fall shoring up is dead on arrival both in the National Assembly and on the ground.

Although Québec  will lead the way, I think the same thing is going to happen all over the country, as the new generation starts to impose its values.

But in Québec, my sometimes beautiful province.

That battle is already won... 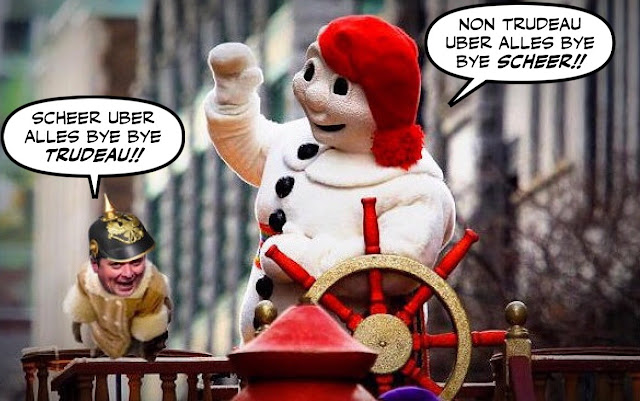 Of courses Ford will support Scheer on the anti carbon tax theme or anything else closely related to it. Gordon Campbell, el gordo, former B.C. premier told him to. Have a look at el gordo's environmental record in B.C. and he is Ford's advisor or rather the puppet master.

el gordo, named his party the B.C. Liberal Party but there was nothing liberal about it. It was full of Cons. and it became better known as the B.C. Lieberal Party. As I wrote some time ago, expect much more from el gordo and his puppet Ford. There will be attacks on the environment, attacks on the health care and education system.

Today's news is reporting ford is planning to change the requirements for having status in the Leg. as a political party. Its very undemocratic, but that is another el gordo thing. When el gordo came to office the NDP was whiped out and left with 2 MLAs. Now it was within his power to grant them party status and enable them to have funding for staff. He simply refused. fortunately the NDP, had two very tenacious women and they continued to fight on.

If you want to know what Ford is going to do, just have a look at what went on in B.C. for 16 years.

There will be attacks on the environment and they will try to take it national, You've provided us with the picture of the tools of climate change deniers and they think they have it in the bag. Expect Ontario to be split on the environment. Quebec has seen the light and the other provinces, it will depend upon their economy. B.C.'s urban areas are much more environmentally aware than rural areas, except for the area where they are building the Site C dam. Its a huge ugly thing which will destroy land, clean water, animals, and families. Yes, something left to us by the B.C. Lieberals and carried on by the B.C. NDP.

Many environmentalist will be voting Green, not for Trudeau, given his support for the pipeline. It won't get a Green elected, but they may help get a Con elected.

The next bullet weak any will have to swallow is Canadians clamouring for a handgun ban. Welcome to the suck andy.

That'd be a shame if voters fall for such a foolish divide and conquer strategy. Single-issue tunnel vision goes nowhere and only serves to shoot oneself and the country in the foot. Trudeau has to strike a balance for the whole of Canada and the carbon tax is probably the best way to do just that. Hopefully people see the bigger picture. Splitting the vote and electing the Oil Can Cons is no way to "hold leaders accountable." How many people have ended up dead under the Trumpenreich because protest-voters (or non-voters) wanted to "teach Hillary a lesson"?

Recognition of fossil fuels impact on climate change by the federal government and implementation of a carbon tax is Big Oils worst nightmare. From a legal perspective the oil producers learned a few things from the tobacco industry a believe that as long as there is controversy and opinions on both sides their expansion actions especially in the energy inefficient tar sands are defensible when the law suits start. All that changes with a formal federal policy. " I didn't know" is no longer a defense. Also failure to adjust business forecasts and write down tar sand asset values can be considered securities fraud and jail time for the guilty. On the other hand if they limit expansion and write down asset values and cash flow, the banks and pension fund (our)investments will flee starving them of cheap cash. Perhaps conventional oil will be legally defensible based on societies demand and the harm that lack of supply could cause in the short term. However expanding tar sand production where 1 in 4 barrels are burnt in the extraction process creating more greenhouse gas than necessary will be legally indefensible. The fantastic 5 are simply trying to buy a little extra time for their masters at the expense of creating greater calamity for all in the future. That is except except for the 1% whose smart money will be long gone when the turds hit the fan.
RT

I will never understand why the Cons have made the carbon tax the hill they will die on. With climate change becoming more and more obvious it makes no sense, unless the Cons are just a front for the oil interests who run this country. The media should be investigating the so-called dark money, that is sloshing around and corrupting our politics.

Send these guys to California for a first-hand view of the flames!

Jackie, the Canadian (Westminster parliamentary) political system is very different from the US (presidential) one. We wouldn't have health care if nobody had elected members from the CCF, later the NDP. And Green MPs could have an influence if the Green party were more progressive and serious than is the case with the Canadian one. Some European Green parties have had considerable influence.

Many facets of the US political system have made it extremely difficult for progressive political parties to emerge.

I was distraught when the CAQA won a majority, in particular due to their ecocidal agenda (more autoroutes and the "third link" bridge between Québec and Lévis, denial of funding for the sorely-needed "Pink line" and other pandering to the carcentric vote.

Good to see that the climate movement is resurgent here and that Legault has to listen to us, or at least pretend to...

Hi e.a.f...I still believe that Doug Ford will be the ideal foil for Trudeau, with Justin playing the prince, and Ford playing the beast. By the time the election rolls around the stakes will be only too clear. Either you vote for a Canadian party, or you vote for Trump's man in Canada...

Hi RT...I think you're right, what else could explain such a refusal to accept reality. They can only be trying to buy their big oil masters a little more time. Over the years I think I've given the oil industry some slack, in the hope that it would moderate it's greedy ways. And because I think we need to protect working class jobs until we can replace them with green jobs. But my patience has finally run out. Those who can't see the shape of things to come must be either really dumb or really criminal...

Hi Steve....I wouldn't hold my breath. I have advocated for gun control all my life, and have been continuously disappointed...

Hi anon...I have often wondered about the role dark money plays in this country. But unfortunately we can't expect the Con media to investigate since they are probably one of the biggest beneficiaries. But there are few greater threats to our sovereignty and it does need to be investigated....

Hi Kathleen...excellent idea. Let's fly them out to one of those hellish fires, and push them out of the helicopter...😉

Hi Lagatta...at least Quebec still has a cap and trade program, and will not oppose the federal carbon tax. And when Scheer comes around trying to build support for the Energy East pipeline I hope he can run fast...😼