Caroline Mulroney And The Day The Dream Died 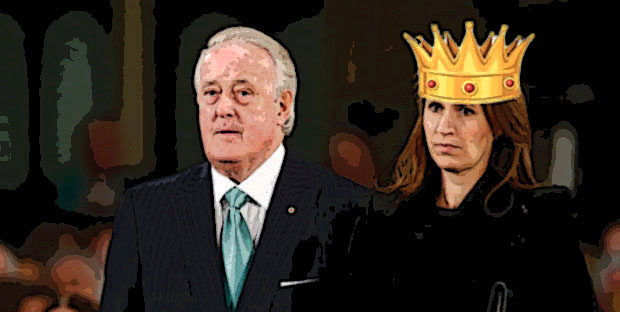 It was supposed to be a political fairy tale. Caroline Mulroney, the daughter of Brian, joining the Ford regime.

And on her way to one day being crowned prime minister.

But sadly for her and her father, it just didn't work out that way.

After the glittering coach that was supposed to carry her to the doorway of 24 Sussex
Drive, suddenly turned into a pumpkin. 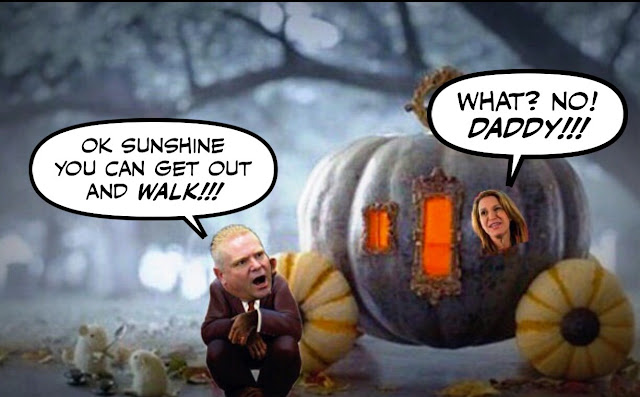 And as Bob Hepburn reports, the dream died.

The dream harboured by the Ontario attorney general when she first entered elected politics in the summer of 2017 was that one day she would become premier of Ontario and eventually move on to become Canada’s first elected woman prime minister.

But that dream is over, shattered by a series of actions that have made her look weak, ineffective, indecisive, intimidated and humiliated.

With the final blow coming when Doug Ford declared war on Franco Ontarians, and Mulroney as the minister responsible for francophone affairs, heartily endorsed Ford's move.

Without shame or hesitation, Mulroney insisted the moves were necessary as part of efforts to reduce government spending. She also tried to blame both the former Wynne government and the federal Liberals for the cuts.

Only to have Ford backpedal furiously, and leave Mulroney looking like an idiot. And not for the first time.

For her first mistake was allowing Ford to downgrade the position of minister of francophone affairs.

The second was allowing the crass Fordzilla to insult Franco Ontarians by not including a single word of French in his throne speech.

But while she might have been able to get away with that one... 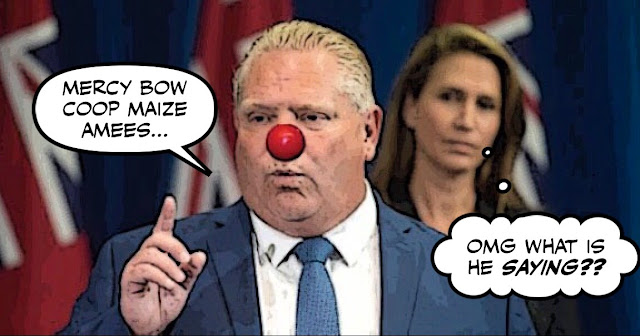 By claiming that she was only trying to prevent the French language from being mutilated.

Then there was this debacle.

The third came in September when Ford said he would use the “notwithstanding” clause in the Charter of Rights and Freedoms to override a judge’s ruling that Ford’s move to cut the size of Toronto city council in the midst of an election was unconstitutional. Mulroney defended Ford’s action, despite almost universal condemnation, including from her father.

From which there was no escape.

Importantly, there’s a pattern here with Mulroney — on all her major files she’s either missing in action or acting as Ford’s subservient puppet.

And made her look only too happy to be sitting in the hairy palm of her ape leader... 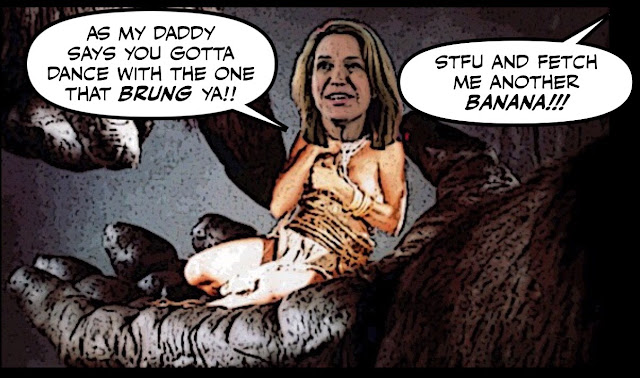 Which is definitely NOT what a future prime minister is supposed to look like.

But then of course, her fatal mistake was believing that Doug Ford was interested in grooming her to be prime minister, when he wants the job himself.

And I suspect her humiliation is only beginning... 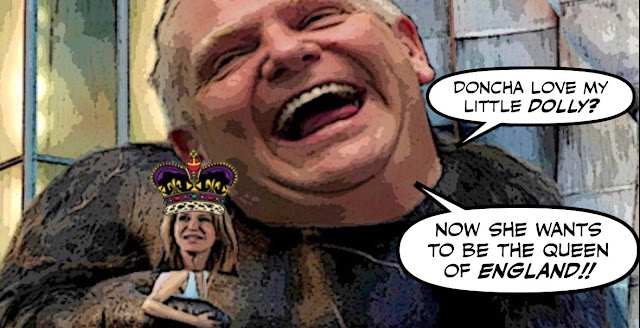 Poor Caroline Mulroney, she thought Ape Ford would be her ticket to glory.

She could have been better, but now she's almost certainly going to go down with him.

Unless she can figure that out, John Lennon’s words will be forever true: “The dream is over.”

And barring a miracle, her dream and her political career are over already.

And she has only herself to blame...

Oh , how the entitled have fallen.

Ivanka Mulroney is no Justin Trudeau, nor Chelsea Clinton. Stephanie McMahon, perhaps? Oh, well, maybe there's a future for her with Broadway Ben as one half of Canada's own Donny & Marie Variety Hour. When all else fails, there's always carpool karaoke with dear old dad. Maybe she'll get her revenge on Dougie and join pops by cashing in on the legit weed biz. "When they go low, we sell high."

As her dear old dad said " no whore like an old whore : But off topic I just decided what I wan for Christmas.

Peter MsKie tied to a telephone pole and hit by slush by each passing snow plow.

weak she is very weak, maybe she should join weak andy and kevin and tour

Whether intentional or accidental, Dougie has stitched her up pretty good. Certainly not an Amanda Simard, more like a Kim Campbell.
RT

It was disappointing when she did not stand up and against some of the things rumpford did. However, there is a way back. One of the caucus has already taken a step and that is to leave. Mulroney could do the same, apologize to the people of Ontario, speak out against ford and do a good job in the leg.

Ms Mulroney can simply hire a good spin doctor, rebrand herself, gain the support of the other young woman and get on with it. When Scheer looses the next election, there will be a leadership review, he gets tossed and she runs or the job. She has 4/5 years to get to know every Con in the country and give it a shot.

She had potential she simply squandered it. She could also cross the floor to the Liberals or Greens.

What do voters see in these political dynasties? Rob and Doug were always a poor imitation of their father. Peter McKay was a joke beside Elmer. Brian makes Caroline look like weak tea. I could go on, but you get the point.

Wait... I hope I didn't hurt our congenial host's feelings about JT.

I agree with eaf that Mulroney has time on her side for a rebranding of sorts, but in order to do so, she needs extreme distance from the idiocy that Ford will continue to escalate as Ontario bleeds more of its manufacturing base next year. She'd be wise to quit like yesterday, and hide out till the con machine destroys itself, she then has the opportunity to rebuild and yes, become PM if she indeed wants the job.

Hi rumleyfips...As I said in my post Caroiine should have known better to get mixed up with a premier like Ford. But her ambition got the best of her, she couldn't wait a few years, and now she'll go down with the grubby gang...

Hi Jackie...I don't think Caroline Mulroney is as bad as most members of the Ford gang, but I don't think she's very politically smart, and that will cost her. After two or three years in power Ford will cast an ugly shadow over all his faithful flunkies, and they will never recover. And it will serve them right for being so damn dumb...

Hi rumleyfips..Ooh that's wicked, but brilliant. I on the other hand would settle for him having to kiss a cod or a salmon over and other again. Goodness know we paid for enough fishing trip so that seems only fair...😺

Hi Steve...Everybody in the Ford cabinet is weak, they have to be or Ford would replace them immediately. Apparently his faithful flunkies monitor how many standing ovations they give Great Leader, and how heartily they applaud him, and if it's not enough then they will be demoted, and replaced with someone who can clap harder. If I was asked to clap even once, I would quit on the spot, but they can't even spell integrity so what do you expect?

Hi RT...I can't remember anything about Kim Campbell, but surely she had to be better than the Ford gang. She belonged to a different era where class counted for something. But as for Amanda Simard I'm impressed by her courage in standing up to Ford, and if she wasn't so Con in other ways, I might wish her happier future than the rest of those troglodytes...

Hi e.a.f...it's going to be difficult, but I do think Caroline Mulroney might be able to rebrand herself one day. We badly need more and better female politicians and she is still in the running in my humble opinion, even if she has to start from the rear. Crossing the floor might also work for her too,But only if she manages to avoid getting tangled up in another scandal...

Hi anon...political dynasties seem to be a fact of life. I wouldn't hold that against anyone, but I would judge them on their own merits. And having a dad like Pierre Trudeau counts as an advantage in my book...😉

Hi bcwaterboy...OK that makes three of us who feel that way. And we designate YOU to break the bad news to her.She has to denounce Ford loudly, then resign, and spend at least two years in a convent doing penance, and then and only then we just might forgive her...😈