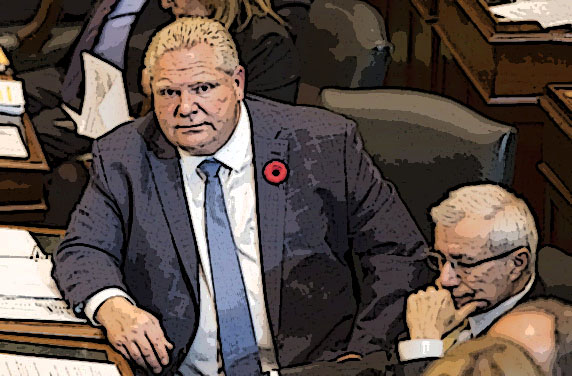 I guess the look on Doug Ford's face says it all.

He doesn't seem to know what's happening, or what he's supposed to say. Except maybe, who knew it was so hard to be a Premier?

He doesn't understand why his Harperite handlers are frantically shuffling his cabinet like pack of cards after only FOUR months in power.

He doesn't understand why it's all going so wrong, so soon, and so fast. 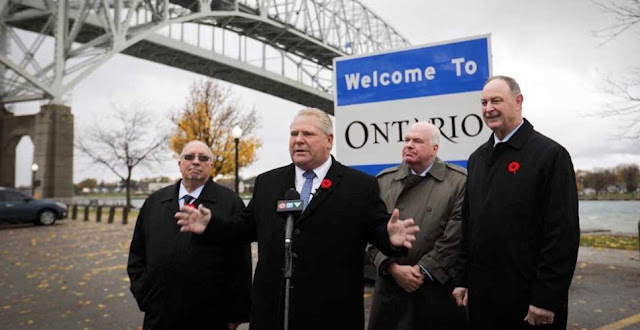 One moment he was happily unveiling one of his tacky ONTARIO IS OPEN FOR BUSINESS signs.

And telling his senior minister Jim Wilson, the man standing right behind him, that he was a super minister. And that their government was already Ontario's greatest government.

Only to have to have Wilson suddenly resign a few hours later, with Ford's office claiming he had some kind of an addiction problem.

Ontario Economic Development and Trade Minister Jim Wilson has resigned from his post and the Progressive Conservative caucus to seek treatment for addiction issues, the Premier’s Office says.

Have that story turn into this one.

Global News has learned from multiple sources that two senior members of Premier Doug Ford’s inner circle were forced to resign Friday due to allegations of sexually inappropriate behaviour.

Jim Wilson resigned from his position as Minister of Economic Development and Trade, as well as from the PC caucus after he was confronted with the allegations.

And then look on helplessly as the scandal grew even bigger.

And Ford's attempt to cover up the scandal failed miserably.

Let’s say it plainly: the Ford government tried to mislead the public over why veteran minister Jim Wilson quit the Ontario cabinet.

Evidently the government believed — or at least hoped — it could hush up the allegations of improper behaviour and just drive on down the road.

If indeed the reports are confirmed, this was both foolish and very wrong.

And although nobody is talking, or squealing, the Ford "government" has now been forced to investigate itself.

And after only four months, its ministers are already scuttling around like mice.

On Sunday, the Toronto Star broke the news of a six-person cabinet shuffle happening Monday. That shuffle was held behind closed doors, and the new ministers snuck out the lieutenant-governor’s chambers through side doors in order to avoid reporters.

It's stunning, it's dizzying, but of course nobody should be surprised. 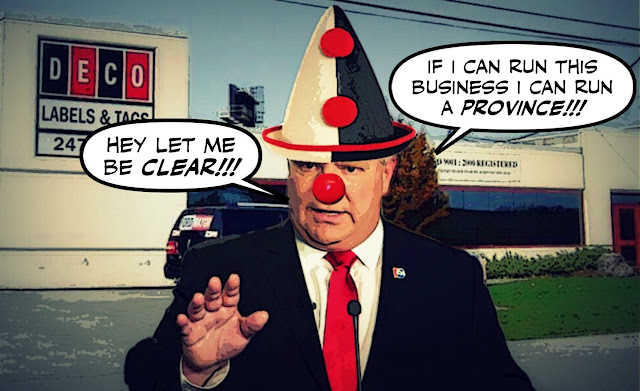 So one could hardly expect him to run the country's biggest and most powerful province.

But what makes all of this chaos even more outrageous, is that Ford isn't really interested in being premier any longer.

Now he wants to be prime minister, and he's going after Justin Trudeau... 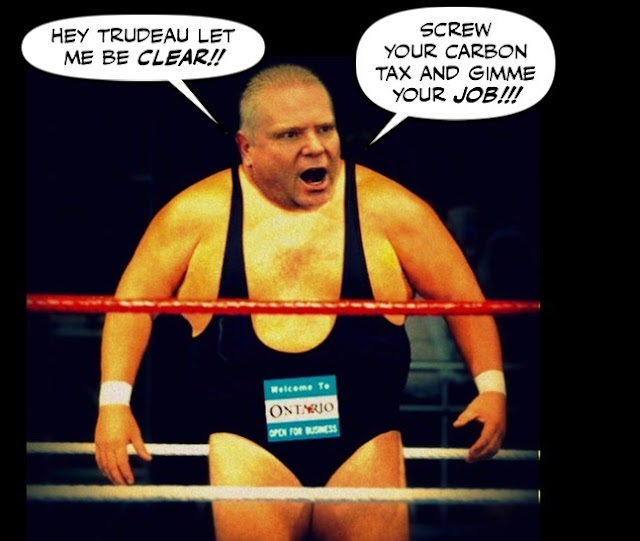 And all I can say is, if Trudeau didn't have an ignorant brute like Ford bellowing at him, he would probably have to invent him.

For after one full year of a premier and a "government" like that one, most of the people in Ontario will be begging for deliverance by the time the federal election will be held.

Which should help give Trudeau an even bigger majority than he got last time. 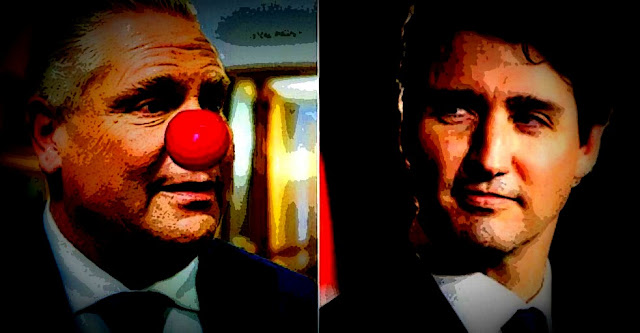 He should never have been a Premier.

But because he was such a bad one.

He never even came close to being prime minister...

Area wise Doug Ford may be larger than his sign. Then again with Toronto/Ontario being cut out of the Amazon expansion maybe Ontario is only open for small business.

It's a good thing Amazon stayed away. Jeff Bezos makes US$4.5 million AN HOUR by stiffing his employees and vacuuming up tax abatements, credits, and infrastructure improvement and training grants in the places Amazon operates. We dodged a bullet there!

In typical Con fashion their first instinct is to lie or attempt to cover it up. Though, in a way I guess Wilson does have addiction issues, just not the sort we're used to hearing.
However, we must remind ourselves that the old horn-dog is innocent until proven guilty or a better "storyline" is conjured by Duh...g's ministry of make-believe.
I expect there'll be many more scandals as any Con government is rife with rattling skeletons in their closets and Ford's will be no different.
JD

I disagree. If you play a game and win following the rules, do not blame the player blame the game. Its Game of Thrones on the streets out there. Admire the men who succeed and then try and control the evil.

I can’t decide whether Drug Fraud running against Justin Trudeau would be terrifying or funny. I’m leaning towards funny after thinking of him trying to get anyone in Quebec to vote for him. His English is bad enough, so Fraud in bad French would probably look like a villain in either Batman or the Pink Panther.

I'm leaning towards terrifying, only because I'm from the States and underestimated the popularity of a corrupt, tacky derelict with an IQ smaller than his waist size once before. Especially in this era of pseudo-populist idiocracy, and when compared to an opponent from a "political dynasty" who has faced years of smear campaigns from the rightwing reality distortion field, and has the hubris to deal in facts, demonstrate compassion towards other human beings, and speak in complete sentences with multi-syllable words. Dougie Kong also comes from a political family of course, but obviously comparing Robbie's political acumen to that of Pierre Trudeau or Jim Sinclair is like holding up the acting chops of Pauly Shore to Christopher Plummer or Sir Laurence Olivier.

Although, it's been said that the "Canadian identity" is predicated first and foremost upon doing things opposite to the USA. Especially now that we have a "test case" to go by (or should I say, a mutant experiment, the attack of the killer tangerine), I would put money on the likelihood that Canadians are smarter than their anti-intellectual cousins, and would know far better than to make the bigliest, yuuuuugest mistake in their 150-year-plus history.

It might be funny to watch, except for the fact that such a Wrestlemania campaign would further debase Canada's political institutions, which have already weathered the Scheer embarrassment of 4chan-style shitposting and Question Period being turned into an episode of Jerry Springer. Run a clown, expect a circus is all I can say. I wouldn't put it past the Cons to take that "advice" to heart.

Tony gazebo the shadow justice minister, who would have thought. Whats with these staunch beacons of Christian morality that are so quick to judge and impose their values on everyone else?
https://www.thestar.com/news/canada/2018/11/06/conservative-mp-tony-clement-steps-back-from-duties-over-extortion.html

The Ontario Proud Boys outrage machine is all over social media attempting to deflect from this Wilson story by dragging out the vague/debunked Kokanee bullshit about Trudeau. The party of personal responsibility, everyone. First commandment of conservatism is to always project onto others what you might see dug up about you. Expect the trolls to erupt with Castro memes from their Looney Tunes exploding cigar box if any of Ford's goons ends up slapped with a paternity suit. Better get some of those, er, crack reporters from the Sun on the case!

Hi ffibs...Trump has only been on the job for four months, but the damage he has already done is deeply depressing. He is attacking the poor and the vulnerable, while giving his fellow millionaires all kinds of tax breaks and other goodies. And it’s only a matter of time before he starts trying to privatize Medicare. And when some of the morons who voted for him realize how he conned them, it’s going to get ugly...

Hi anon@10:39 AM...I agree, I have very little respect for Bezos and his greedster ways, I hate Amazon for what it has done to small stores everywhere. And the way cities were grovelling trying to get Bezos to favour them was simply disgusting...

Hi JD...Yes, the blatant way Ford’s Harperite handlers tried to cover up this scandal is deeply disturbing, and I fear a sign of things to come. But the good news is that losing Wilson and Kimber is a huge blow to Ford. Along with Jenni Byrne they were his top advisers. And since He doesn’t have the talent pool to replace them, things can only go from bad to worse...

Hi Jackie...I don’t blame you for feeling that way after the Trump experience. But while Trump has at least a feral intelligence, Ford really is as dumb as a spoon. He’ll do what he is told for now, but sooner or later he’ll break free from his Harperite handlers and it will be the end of him and the Ford Nation...

Hi RT...yes, Injust finished a post on sexy Tony, and his unfortunate sexting adventure. And I must say I really enjoyed writing it... 😺

The Ontario Proud boys can try to deflect attention away from the Wilson and Kimber scandals, but it won’t work now that the Cons have agreed to a full investigation. They will keep the story alive, while the Cons can keep blowing air into that Kokanee corpse, and get nothing for their troubles...