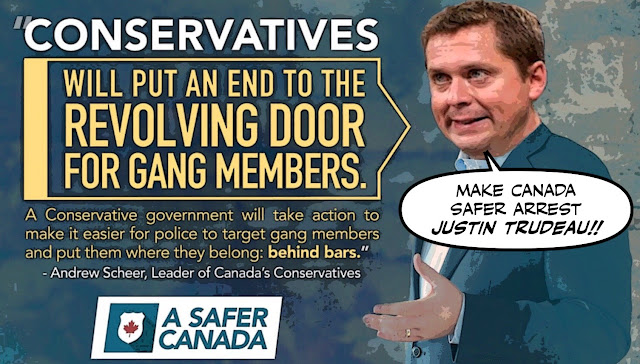 It's funny. Andrew Scheer was in Toronto yesterday trying to scare Canadians into voting for him.

By accusing Justin Trudeau of being soft on crime.

Only to find himself accused of being too soft on Tony Clement. 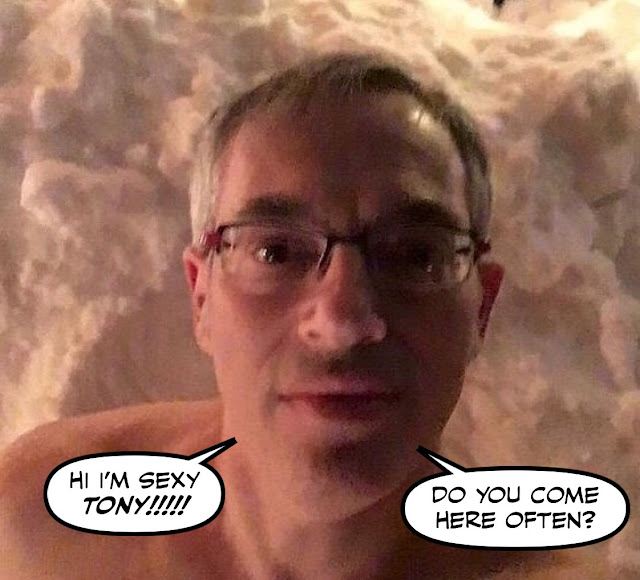 For although it now appears that Clement has been engaging in risky online behaviour for a long time.

Former Conservative MP Tony Clement, dropped from caucus over a public sexting scandal, is now admitting to multiple cases of "inappropriate exchanges" online and says it was "foreign actors" who tried to financially extort him.

For the first time, the Ontario MP is also admitting that he had to contact police not once, but twice over online transgressions — calling into question who in official Ottawa and law enforcement circles knew the details of the case, and when.

Scheer only asked Clement to leave the Con caucus yesterday, and never looked weaker than he does in this clip...

Or a religious fanatic worried that people might start calling the Conservative Party the Pervert Party.

But after reading Scheer's excuse for taking so long to demand Clement's resignation.

“I took him at his word that this was an isolated incident. Since then, there have been numerous reports of other incidents, allegations. In that respect, I have asked Tony to resign from caucus so that he can respond to these allegations,” Mr. Scheer said.

And after reading this:

I find it very hard to believe that Scheer had absolutely no idea of Clement's reputation in a small Peyton Place of a town like Ottawa... 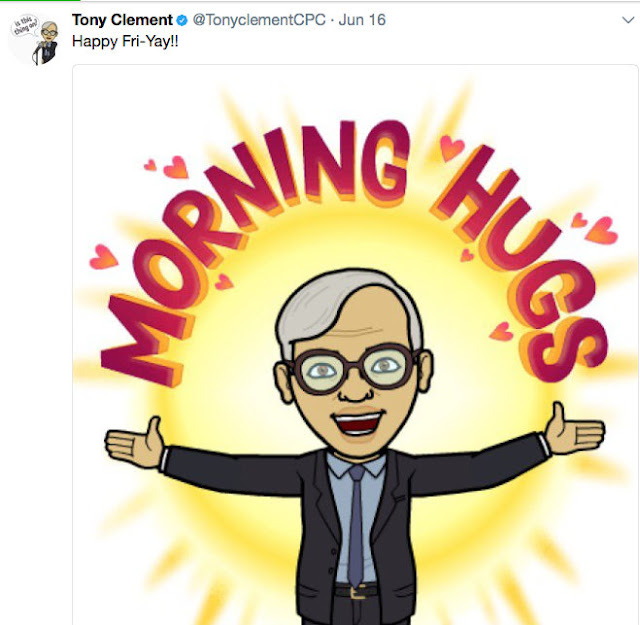 Even though, as Michael Harris points out, Clement's creepy behaviour might have endangered the country's security.

Clement was on Canada’s National Security and Intelligence Committee of Parliamentarians. That means he was privy to the country’s deepest secrets. He has admitted that he was duped into thinking his sexting, including a dubious video that he sent, was going to a consenting woman. The former Conservative now says he’s being “extorted” over their sexually explicit communications. The RCMP is investigating. This is the kind of gross recklessness that turns the hair of security officials prematurely grey.

The way Scheer has handled the crisis is both laughable, and appalling.

Conservative Leader Andrew Scheer has not done the right thing in the current circumstances. For the family-values party, Scheer’s initial reaction to Clement’s admission was laughable. After a stern talking to by Scheer, Clement resigned as justice critic and saw his committee roles assigned to Lisa Raitt. That done, Scheer had no problem with Clement remaining in caucus.

Just a few hours later, Scheer reversed field. Faced with more allegations of sexting by Clement, Scheer asked him to resign from caucus so he could “respond” to these “allegations.” That leaves the door wide open for Clement to return.Not a word about the violation of public trust in play here.

And is yet another reason why the creepy Scheer should never be prime minister.


For despite all his ranting and raving about law and order, he simply can't be trusted with the security of Canadians... 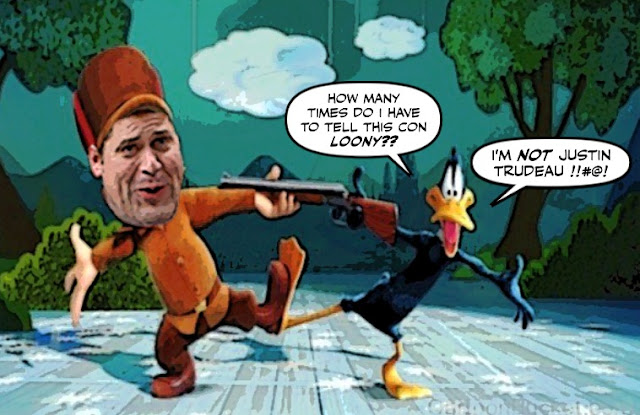 As for Clement, although he has disgraced himself enough.

And while he'll almost certainly be remembered for that gazebo in the middle of nowhere. And the way he mutilated the census for no good reason.

And his creepy online behaviour.

He still needs to come clean about why he didn't resign from that intelligence committee sooner.

And Andrew Scheer needs to make it clear when he first knew that Clement was harassing women, and why he didn't act sooner to remove him from the Con caucus.

In the meantime, I know I'll also remember Clement for this 2010 Rick Mercer skit, where Clement models a pair of groovy two-and-a-half D glasses...

Where one colour blends into the other, the truth is not exactly as advertised, and one can't help feeling that a cover-up could be underway.

Clement and Andrew Scheer both need to be questioned by a parliamentary committee to ensure that Canada's security has not been compromised.

Tony Chlamydia, the Cons' biggest bozo erec -- er, eruption yet. Andy can't contain his own party, how's he supposed to run a country? Speaking of bozos, I saw the MacLean's memes of the Methane Mafia going around social media and thought it was hilarious. For what it's worth, though, I think Weak Andy's eventual resignation letter should be a cover story for a different magazine. "Dear Penthouse: Justin Trudeau might be on the cover of the Rolling Stone, but he's the real failure! That being said, I never thought this would happen to me..."

Send five copies to your mother! (Or "Ma Belle"?)

You just have to wonder why Tony keeps feeding the fire, just go away, we do not want to hear about your tawdry sex life.

There is help to overcome addiction problems but in true Con fashion Scheer seems to holding out hope that with a little repent and reform all will be well with Tony. Not to mention any names but in Scheerland its not his fault that he fell victim to the devils spawn.
RT

Not once, not twice, but multiple times Tony has betrayed his wife, family and this country's security apparatus. What a perverted idiot he is.
He should be investigated(and probably is) on whether high level secrets were compromised as well as if his actions warrant charges. On top of that, if ever his Little Tony pics were to accidently pop up in my browser I will sue him for gross indecency or probably die laughing.
JD

Asking Tony to leave the cacus is a jerk move by Andrew. Tony Clement is the victim and deserves compassion. When did the left become prudes?