Will Donald Trump Win Or Lose The Midterm Elections? 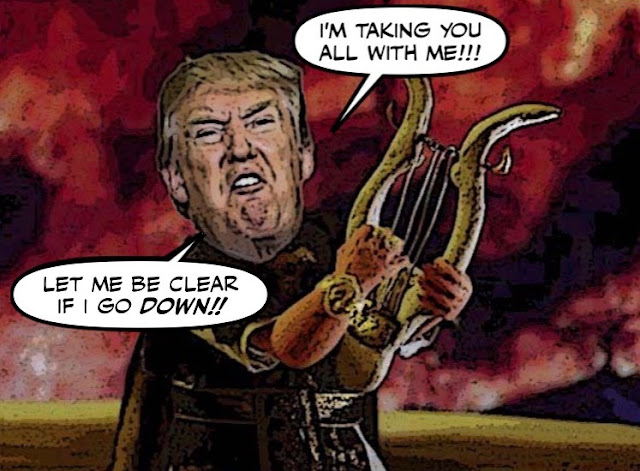 I can only imagine how Donald Trump must be feeling, with the midterm elections now only a few hours away.

He's been ranting and raving and spewing out bigotry, at one rally after the other.

So he must be bagged, he's clearly desperate, and the suspense must be killing him.

But then he isn't the only one, for the horrible truth is that nobody really knows what's going to happen tomorrow. 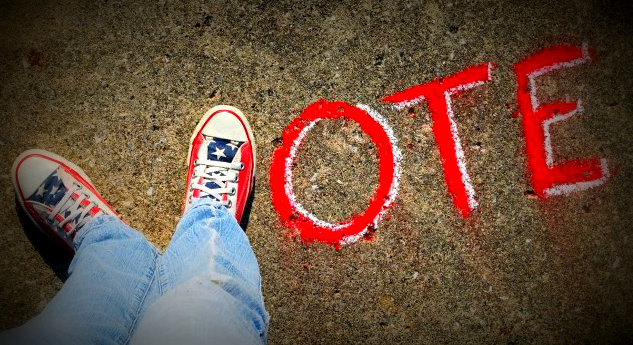 And there are apparently, two vastly different outcomes.

On the day before the midterm elections, two vastly different outcomes remain easy to imagine. There could be a Democratic blowout that decisively ends Republicans’ control of the House and even endangers their Senate majority. Or there could be a district-by-district battle for House control that lasts late on election night and perhaps for weeks after.

The first would be interpreted as a repudiation of Donald J. Trump, the second as another example of his political resilience.

One where Trump's monstrous hold on America slowly starts to crumble like a sand castle... 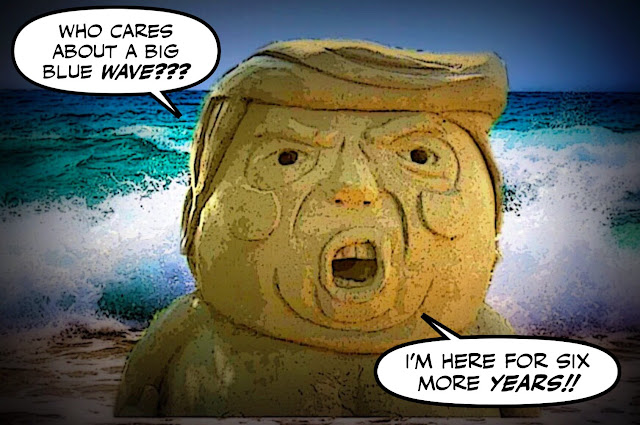 And one where he wins, and the nightmare continues, and just gets worse.

For if this is how that racist, that misogynist, that morally depraved bully is portraying himself as he prepares to impose more sanctions on Iran. 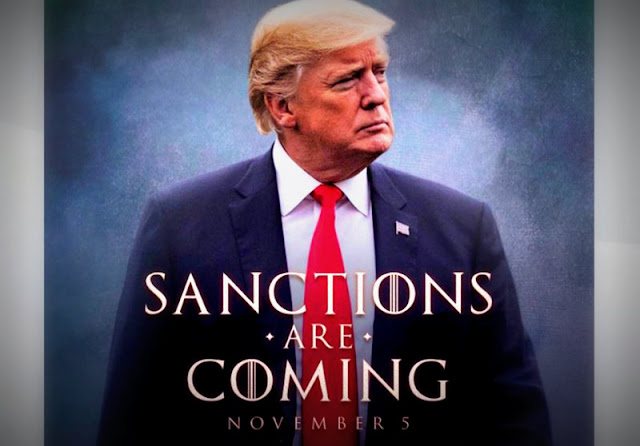 It could get a lot worse.

But at least, as Michael Harris writes, on Tuesday the real America will stand up.

On the surface, it is a choice between one political party or another, and the usual drudgery of partisanship. As Winston Churchill put it “The best argument against democracy is a five-minute conversation with the average voter.”

But beneath that partisan divide, the tectonic plates of competing visions of the national character are grinding away south of the border.

Either way, there will be an earthquake.

If the Republicans win on Tuesday, the earthquake will be this: the land of the free and the home of the brave will become the republic of serfs and snow jobs. It will be the witching hour.

Or as Michael Harris writes, it could be the beginning of something better. 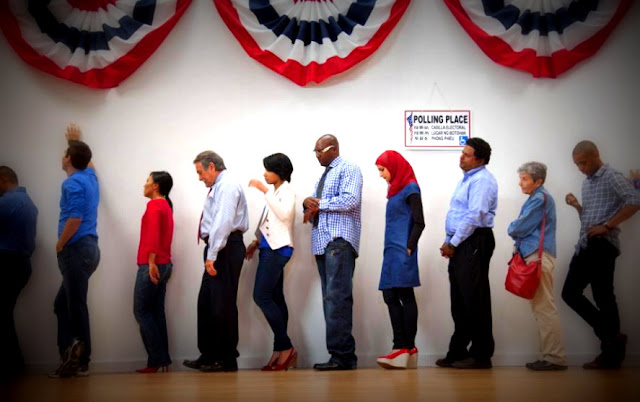 The Democratic earthquake? A country where you don’t have to be a billionaire to land a job in cabinet, you can’t govern by lying your brains out, and even a nobody can go to the doctor.

And he's definitely right about this:

In these dark, dirty days, an argument can be made that everyone could use a sunrise.

Hang on to your seats everyone.

Cheer for our decent neighbours as they confront the monster in the White House.

Thanks, Simon. We decent USonians are glad that Canadians see the distinction between Trump and his deplorable militia vs. the rest of us in the occupied territories. Beto O'Rourke has garnered numerous comparisons to Justin Trudeau, so it'll be a hoot if he ends up defeating the Cuban Calgarian, oily Ted Cruz. (Who literally, and I mean verbatim, ripped a page from Harper's playbook and said that "people only vote for him because he has nice hair"!)

Our M$M is as spineless and whataboutist as most of yours, but I don't know how we'd be getting through this without Daniel Dale's play-by-play and his willingness to call Trump's lies, LIES. We're sorry (soory!) that the country is experiencing technical difficulties affecting our upstairs neighbors, but we hope to start the process of rebooting the system shortly.

If it doesn't work, expect an American Caravan heading your way between now and Christmas...

Given the lack of the historically low voter turn out, all that needs to happen is for many to stay home. I view this not so much as who votes how, but as who just doesn't vote. As one comedian put it, the biggest political party in the U.S.A., are those who don't vote.

Hitler got to power on approx. 35% of the vote and so did Trump. If he sticks with that and the Dem. supporters don't get out to vote, its all over and I'm not so sure the U.S.A. can/will come back from the direction they have been going. Its who and what America is.

Now it maybe that individual politicians have energized the people in their districts and they go out to vote, but many just had the feel good moment at a rally and then went home and forgot about it all.

"Democracy" as it started in England was about the rich ensuring they hung on to what they had and that the most powerful man in the country didn't take it away from them. It was never about the average citizens having a say in society. Not much has changed since then. We're just seeing again, what it was at the beginning.

I'll be watching the returns because our lives too may depend upon this election. With Trump saying he wants the military to fire upon migrants who throw stones, you just know he is planning a lot more. Firing upon unarmed migrants is not getting the blow back it ought to, so he is good to go, with this. All that would remain between migrants being shot is the military refusing to follow the order. It is not part of their training. However, the National Guard, who knows. I remember Kent State.


But then with minor changes, eliminating the draft, embracing the the cultural changes at the most superficial and perverse levels, they started to regain control.

And the people focussing on the bright shiny objects fell back to sleep. Now Kent State is just anotjer Neil Young song that gets played on the old people's Classic Rock stations where we sing along remembering how cool we were but not what we pissed away.

The world is watching the so called free world deal with the biggest fraud ever.
Judge Judy is about to lay down the gavel and will the Kardashians comment?

Here's hoping the beginning of the end of Trump begins today Jackie.
JD

the draft should have been part of the constitution. If we only send people who have no other choice to war, we will have endless war.

Hi Jackie...you’re welcome. And you can be sure that we’ll always recognize the difference between Trump and his deplorables, and the decent people of America. I realize your country is presently experiencing technical difficulties, but I’m sure it will in time come out of the darkness and into the light. And when it does, you ‘ll hear us cheering even as faraway as Louisiana and Hawaii...🇺🇸🇨🇦

Hi e.a.f....Voter turnout is always a problem, in the U.S. as it is in Canada. But I’m writing this on the morning after, and it seems that the American people performed magnificently and have managed to clip the wings of the tyrant...

Hi ffibs...All I know about the sixties is the music, the best music ever. But it must have been horrible going from Johnson and his Great Society, to Nixon and Kissinger and the death of anything decent. I’m sad so many boomers sold out, as have other generations. But there are still enough good ones left to help start another revolution...

Hi Steve...the problem with the draft is that it militarizes a country, and the rich like Bonespurs Trump always manage to dodge it...