They call themselves Extinction Rebellion. This is their declaration.

When Government and the law fail to provide any assurance of adequate protection, as well as security for its people’s well-being and the nation’s future, it becomes the right of its citizens to seek redress in order to restore dutiful democracy and to secure the solutions needed to avert catastrophe and protect the future. It becomes not only our right, it becomes our sacred duty to rebel.

And today their rebellion began.

More than 50 people have been arrested as thousands of demonstrators occupied five bridges in central London to voice their concern over the looming climate crisis.

Protesters including families and pensioners began massing on five of London’s main bridges from 10am on Saturday. An hour later all the crossings had been blocked in one of the biggest acts of peaceful civil disobedience in the UK in decades. Some people locked themselves together, while others linked arms and sang songs.

Extinction Rebellion is made up of people of all ages, and even includes some well known members of the establishment.

When a government wilfully abrogates its responsibility to protect its citizens from harm and to secure the future for generations to come, it has failed in its most essential duty of stewardship. The “social contract” has been broken, and it is therefore not only our right, but our moral duty to bypass the government’s inaction and flagrant dereliction of duty, and to rebel to defend life itself.

And they all say they are not afraid to be arrested...

And although I don't know where they are going, many of my friends were in London today, so I think I'll go with them.

I'm tired of living in a country where a gang of sleazy Con planet burners can be called The Resistance... 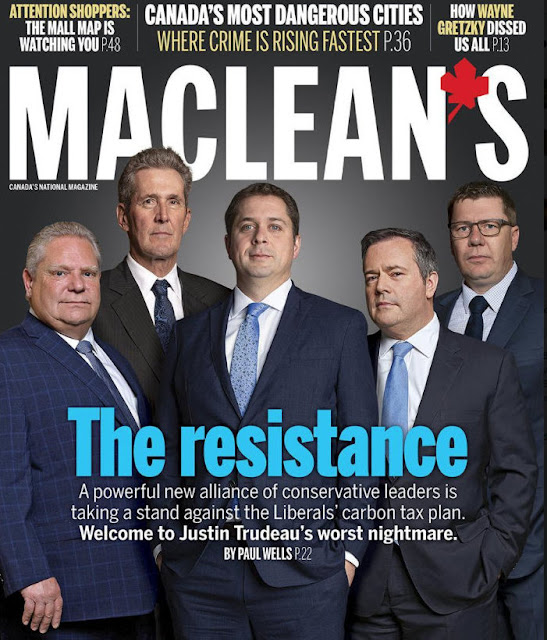 When they are the problem, and we are the resistance.

I'm tired of all the twisted old doomsayers... 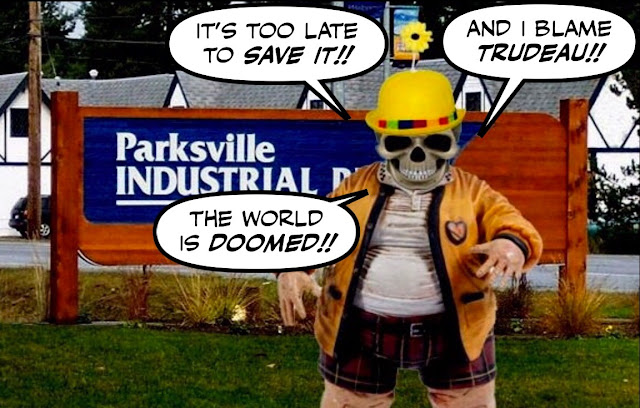 Who talk up a shit storm, but never do ANYTHING.

The day of the dilettante is over.

The Extinction Rebellion is coming to Canada.

The group is also making international contacts, with 11 events planned in seven countries so far, including the US, Canada, Germany, Australia and France.

And a new day is dawning... 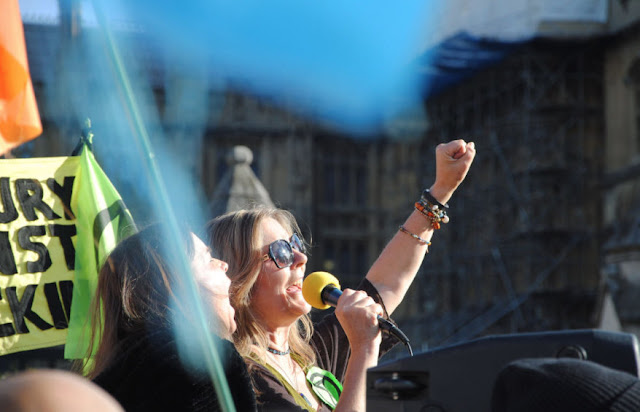 I look forward to joining other Canadians in holding our leaders' feet to the fire. I'm glad to see thousands of Brits hit the streets to demand more action on climate change. This in a country that has actually done something - since 1990, Britain's average per capita GDP increased by 46% while its annual carbon emissions dropped by 41%.

Here in Canada, we've done nothing. Over the same period our per capita GDP grew by 16% while our annual emissions also grew, by 18%! Our government's reaction is to nationalize a pipeline with a view to tripling its capacity. And we're told the best we can do is hope the Cons don't destroy a carbon tax that avoids taxing the big emitters!

Extinction Rebellion bring it on!

Thanks for posting this. My partner went on this demo and hasn't returned home to Brighton tonight - probably arrested. Hope you were/n't too!

I wish them luck. Occupy Wall Street ended up getting quashed because, as the old song goes, money makes the world go around. Science fiction novelist Kim Stanley Robinson said in a recent BuzzFeed column that climate security is incompatible with capitalism -- which means in order to save the planet, the masses will have to rise up and have nothing less than full-scale revolution against the Western way of life itself.

Knowing what I know of people, especially during the holiday shopping season, all I can say is that Extinction Rebellion is going to have a helluva uphill battle. I hope they prevail, and that bloodshed doesn't ensue or the movement backfires and ends up electing more Bolsonaros, Trumps or a Scheer due to the economic fears of people in resource-heavy industries being faced with losing their jobs -- and not just their livelihood but their psychological identities. If something isn't done to mitigate the harm that humans have caused (and we have caused it), we not only won't have a white Christmas or any snow in Africa but we're all going to be walking, talking chestnuts roasting on an open fire.

When they come out in the thousands, they cant be ignored. Once they start coming out in the millions, the right wing idiots in power will have no choice but to act and that includes our own five stooges disguised as "The Resistance" or as I like to call them, "The Pestilence".
JD

It may feel good to protest, but climate change is also up to individuals As one article suggested, people need to stop purchasing a new I Phone every two years. its not good for the environment.

Corporations pollute and they need to stop. Many are polluting because they are producing items, which the public purchase. If people don't purchase, they won' be produced. Now of course, the government can legislate things not to be produced and they can legislate a better method of production, etc. but first the general public needs to get their act together.

We all believe its our right to have wonderful far flung vacations but we really do screw up the environment when we do that and that includes what they call 'environmental tourism". You fly, you create exhaust with airplanes and just the use of the jet fuel. Then there are all the hotels which are built, etc. People complain about the quality of air, but really, they hop on jets and go on vacation regularly. Live by an airport and you know how air traffic has increased and its just not all due to the increase in population.

Every Christmas we watch all that environmental resolve go out the window and the madness of Christmas shopping takes over. The paper, the bags, the goods, then it all gets tossed out. How about sending all your friends a family a hand written note on re cycled paper which says, what ever you want to say and "I took the money and donated to ..............." Some people like to receive gifts so send them chocolates or some food stuffs locally produced instead of stuff made in a huge polluting factory.

Simon, are you in London at the demos or here in Canada

Time for North America to WAKE-UP!

Hi anon...I have no time for those who blame Trudeau for all our problems. The fact is that Canadians are a very greedy people who like to blame others tar her than themselves. Trudeau is trying to impose a carbon tax that is the only way to green our economy, and unless we engage in a collective effort we will get nowhere...

Hi Jo Jo...I hope your partner managed to get away OK, but I am not in the UK , so all I could do was cheer the ER army on...

Hi e.a.f...as I told Jo-Jo is was not in London. But even if I had been I would not have exposed myself to being arrested, lest I be banned from entering the UK. And since I have family in Scotland that would be a disaster. It seems that you and I will have to wait to be arrested until ER comes to Canada...😼

Hi Jackie....I may be a dreamer, but I have both feet on the ground. I too realize that Extinction Rebellion has huge obstacles to overcome. And I further realize that it could backfire, and play into the hands of the fascists. But I think it's important that as much noise as possible be made to warn the complacent where we are heading, and why we must do something before it's too late. Hopefully it will just be the next stage on our way to a better world...

Hi JD...Humans are prone to be complacent until it's almost too late. If this rebellion wakes more people up to the danger we face, it will be more than worthwhile. The "Pestilence" must be made to understand that their planet burning Con ways will have to end one way or the other...

Hi e.a.f...like you I agree that fighting climate change is up to all of us, and cannot be simply left up to our leaders. More pipelines may be bad, but so are 25 million cars, and we all need to take responsibility for our actions...

Hi Kathleen...we do need to wake up, but I am optimistic that the new generation will make enough noise to wake us all up. Climate change is now impossible to ignore, so those who ignore it will increasingly be seen as criminals or maniacs...

that sounds like a plan. a whole lot of us could meet at some demo, get arrested together and get to know each other.