American Thanksgiving: How To Survive The Horror Of Trump 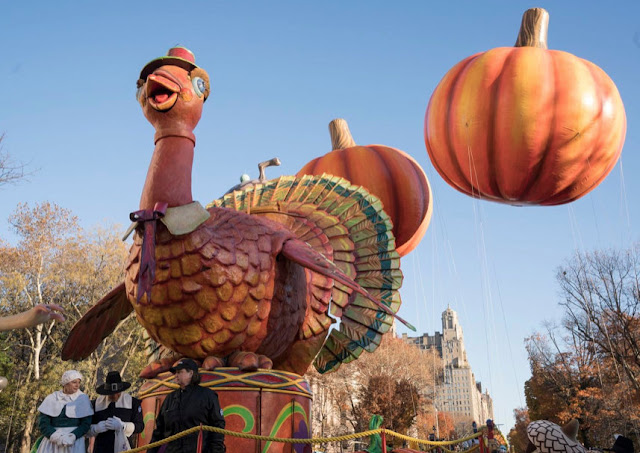 It's Thanksgiving Day in America. A day for our neighbours to watch the floats in the Macy's parade, or just enjoy some quality time around a dinner table.

And of course, stuff themselves with turkey.

But as we all know, the U.S. is not a happy place these days. 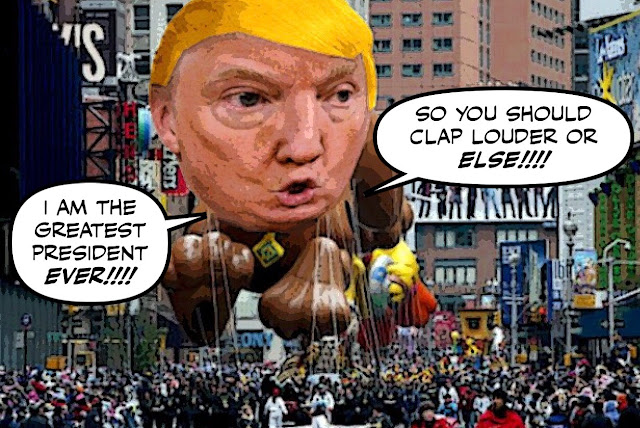 Some floats are more monstrous than magical.

Even the turkey can be tainted... 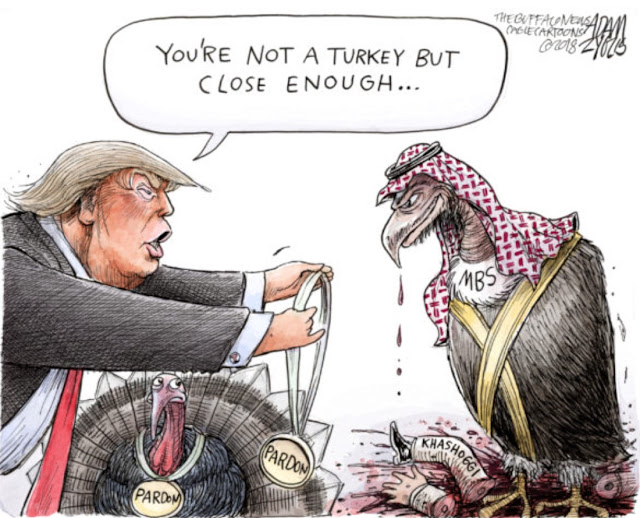 And of course, the ghastly Donald Trump can be so ignorant and so criminal...

As he cheerfully torches the planet.

Especially when he thinks he's a "stable genius" and all the others are fools.

President Trump is surrounded by fools.

There’s that fool William H. McRaven, Special Operations commander of the raid that killed Osama bin Laden, and the other fools in the U.S. military, who should have brought down bin Laden “a lot sooner,” because “everybody in Pakistan” — all 208 million of them — knew the terrorist leader was living in “a nice mansion.”

There are the fools in the CIA, who have concluded based on so-called evidence that Saudi Crown Prince Mohammed bin Salman ordered last month’s killing of Post contributor Jamal Khashoggi. But Trump alone understands that we’ll never know the truth, because the crown prince denied involvement “maybe five different times.”

From Washington to Finland.

There are the foolish Finns who, after Trump claimed Finland avoided forest fires because “they spent a lot of time on raking,” are now mocking him by posing with garden tools in the woods. But Trump knows Finnish forest-raking is real because Finland’s president, Sauli Niinisto, told him about it just last week (even if Niinisto can’t remember this).

And when I read stuff like that, and even though the Great American Resistance is growing stronger every day, and on its way to a glorious victory... 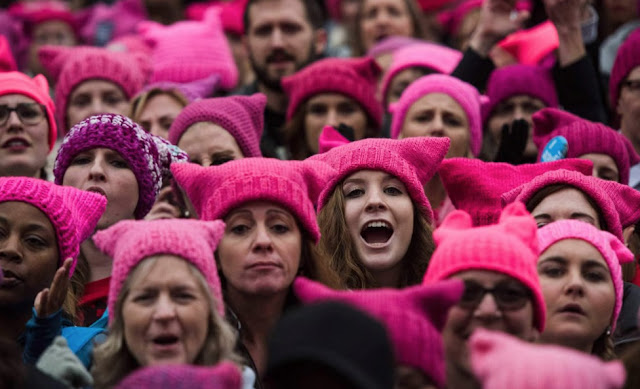 I can understand why so many decent Americans might wonder how they are going to survive two more years of Trump.

Because I sometimes wonder the same thing myself eh?

So I thought I'd share a recent column by Charles Blow that I have been saving for this occasion.

Do we have a right to weariness in an era of animus? More precisely, can we afford it, or is exhaustion a luxury reserved for those whose wealth, privilege and status insulate them from the losses the rest of us could suffer? Does patriotic defense of country require perpetual, obsessive vigilance, or is it permissible to retreat occasionally for one’s own mental and spiritual health?

One that asks some hard questions:

But ultimately leads to a good place and some wise advice.

The struggle for goodness and decency is an eternal struggle, not a seasonal one.

Don’t beat yourself up if you need to tune out every now and then and take a mental health break. There is no shame in it. This is a forever fight. Once you have recharged, reapply your armor and rejoin the fight with even more vigor.

And I think today would be a good day for our decent neighbours to take that break, for they do deserve it.

So from this Canadian, to my readers, family, and friends in the U.S.

And of course to The Great American Resistance.

And please save some turkey for me.... 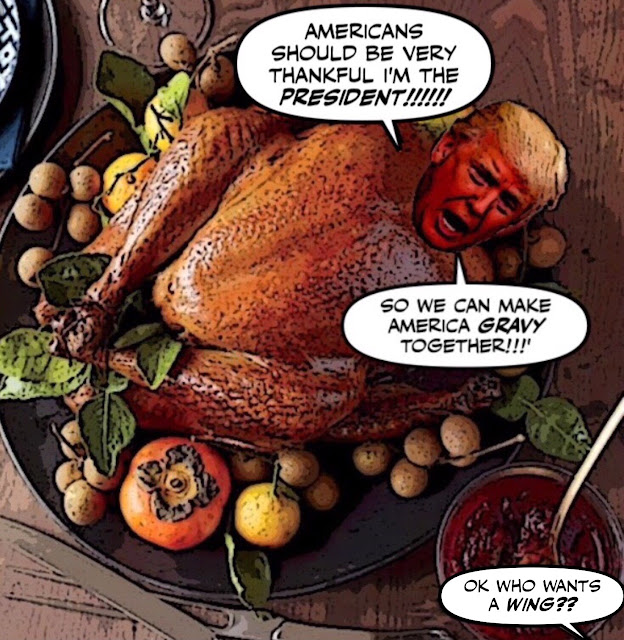 Well said Simon. I just have one issue with your last graphic and that is Trump's head is at the wrong end of the bird.
Happy Thanksgiving America and especially to our southern neighbour who never regales us with a dull post, Jackie Blue.
JD

Robert's support of an independent judiciary is interesting. He may be thinking that his legacy will be tarnished by adhering to the radical right wing agenda. He made a mistake with Citizens United but refused to kill Obamacare. He may dissapoint Trump et al and become a moderate voice.

Thanks JD. I regret to inform you, however, that Trump is doubling -- tripling -- quintupling down on the symbolic cruelty by pushing to revoke the tribal status of the Wampanoags, the tribe who saved the Pilgrims from starvation before their ultimate betrayal by the white settlers. And of course, it's all about a damn casino. The art of the steal.

Meanwhile, on your side of the 49th, Justin Trudeau (who, in marked contrast to Trump, is in the process of pursuing Truth & Reconciliation with Canada's indigenous peoples), has sent out a PSA encouraging Canadians to get their flu shots. Predictably, anti-vaxers and the usual homophobic conspiracy theorists are all over the thread saying that he "infected himself" with autism and is not competent to be PM, while otherwise hoping that the syringe contains Ebola or HIV and that he dies of "vaccine injury."

At least I can be thankful that amid the massive hordes of stupidity, there are still flickers of enlightenment left in the world.

Charles Blow's advice is good advice for all of us. We need to have confidence in the future and take care of ourselves. Let the old wingnuts wear themselves out screaming at us and trying to hold back the future, and we will bury them where they fall.

Its wylie e coyote country now, and lets be frank it always was, except now the reality distortion field needs miles instead of feet to operate.

Hi JD...Trust me, I did toy with the idea of placing Trump’s head at the other end, because that is indeed the end his deranged tweets come flying out of like bats. In the end I didn’t, but there’s always a next time. Thank you for sending a special Thanksgiving greeting to Jackie, who as you say contributes so much to this blog. I can’t wait for the day she and all the other progressive Americans are delivered from their nightmare,..

Hi Jackie...all those Con grifters love casinos. Our own Dougie is about to announce plans to build one on the waterfront not far from where I live, and needless to say I’m not happy. 😡
But I guess that all crime families need a place to launder their money. As for the flu story, it also enrages me. I can’t believe that the Cons can be so medieval, and don’t understand that their actions can threaten the lives of the elderly and other vulnerable people. We really need to find an island where we can quarantine the Cons for life...

Hi rumleyfips...I too am hopeful that Roberts can help hold back the fascist tide until Ginsburg can safely retire, and Trump can be booted out of office. Giving him the power to change the composition of the Supreme Court has saddled us with a monster that can go on poisoning America long after Trump is gone...

Hi anon...I must admit that I saved Charles Blow’s article, because it held a special appeal for me. I also can’t believe the amount of time and energy I have spent writing about Trump, and I’m not even an American. So yes, progressives need to remind themselves that the struggle for a better world is not a sprint but a marathon. And that we need to take some time to stay fresh and rested for the big battles ahead...

Hi Steve...the Supreme Court May not be perfect, but over the years it has been responsible for some decisions that have made America a better, and fairer place to live in. It demolished the apartheid state, and gave women and LGBT Americans rights that governments were too scared to grant. Trump who hates the justice system for obvious reasons is trying to corrupt it to pleasure the religious right, but the day it goes down, America will go with it...

The Walrus has an interesting article regarding the future of the U.S.A. and includes the possibility of civil war. We would of course be receiving the refugees.

Trump has ramped up his rhetoric regarding transgendered people in the military along with discussions regarding Saudi Arabia having nuclear capability. Yes, Iran ought not to have them, but S.A. can. OMG, that man truly is crazy. He won't be impeached and the manner in which he is attacking the judiciary, military, media he is really destabilising his country. things such as that do lead to full blown civil wars.

One could say it has already started, we just don't know it. With mass killings, riots, charlotsville, etc.

Climate change has hit the U.S.A. and it does not bode well for its future between the hurricanes and fires, where can people live? A few more "once in 500 yr" storms in New York and N.J. and people and insurance companies may want to bale. The matter of the Dreamers still hasn't been settled so we still may be looking at 800K young people being deported along with those who have their citizenship revoked. Expect many of them to look to Canada to resettle.

Large corporations may start looking for safer places to settle. Civil unrest, mass shootings won't always result in people wanting to move there, if they can go some where safer. that some where safer would be places in Europe, Australia, N.A., Canada.