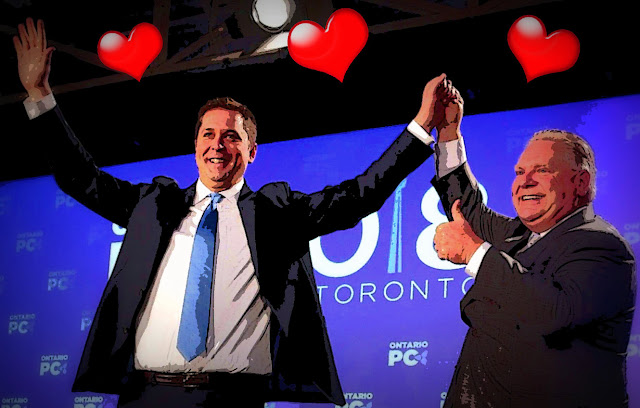 When I last left Andrew Scheer and Doug Ford, they were hanging out together at the Ontario Con convention. Vowing to go after Justin Trudeau's dastardly carbon tax.

And looking like they were about to get hitched.

But what a difference just a couple of days can make eh?

Now Scheer is desperately looking for a quickie divorce. 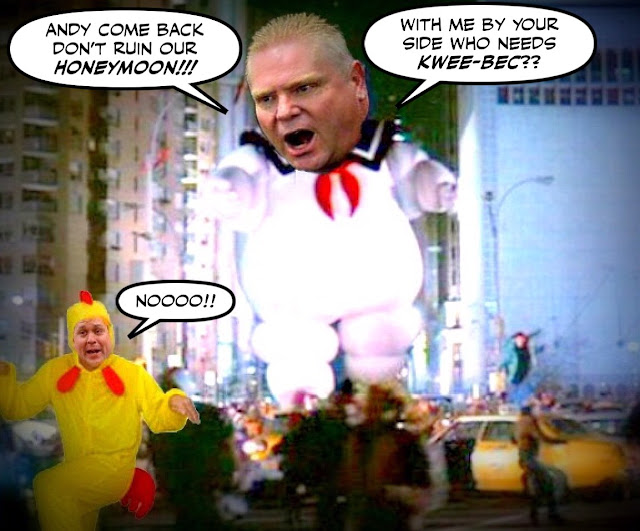 Or at least desperately trying to disassociate himself from Ford's brutish assault on the rights of French-speaking Ontarians.

In a rare public disagreement among political allies, federal Conservative Leader Andrew Scheer has expressed his concern about cuts in services for Franco-Ontarians to Ontario Premier Doug Ford.

Before the rampaging Fordzilla blows Scheer's chances of winning more any seats in Quebec right out of the water.

Because in Quebec, that attack on French Canadians is a REALLY big deal.

The government’s moves have been met with condemnation, not just from Franco-Ontarians, but also from Quebec. The mayor of Quebec City and the new CAQ government have both raised concerns about the changes. CBC News reports that Mayor Régis Labeaume called the moves “petty” and a “provocation.”

The newspaper Le Droit called the rollbacks a “dark day for francophones.”

But unfortunately for Scheer, all he dared do was express his "concern" which won't satisfy anyone.

While he spoke in French a few times during his Saturday-morning speech, Scheer did not raise the issue. And even though a location was set up for a news conference, he did not speak to reporters.

And apparently trying to get the beast to change his mind, is like talking to a wall. 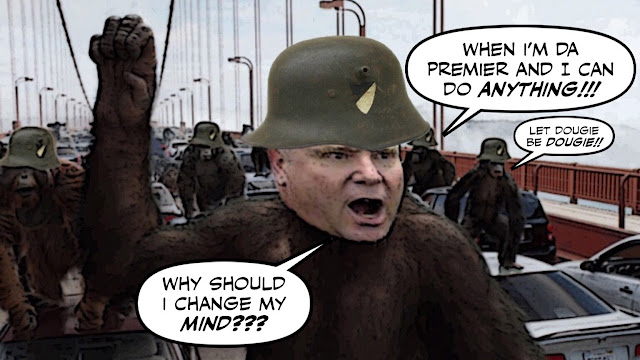 Scheer spoke with Ford and with Caroline Mulroney, the minister responsible for francophone affairs. The two leaders spoke for 15 minutes. "After two minutes, we realized that he wasn't going to change his mind," the source said. "It was like talking to a wall."

But then why should Ford respect Scheer, when he wants his job?

The carbon tax will force them to pretend to be friends. But sooner or later they'll start fighting, and they'll both go down together.

It's what they both deserve.

But I just hope that Justin Trudeau remembers to be suitably grateful... 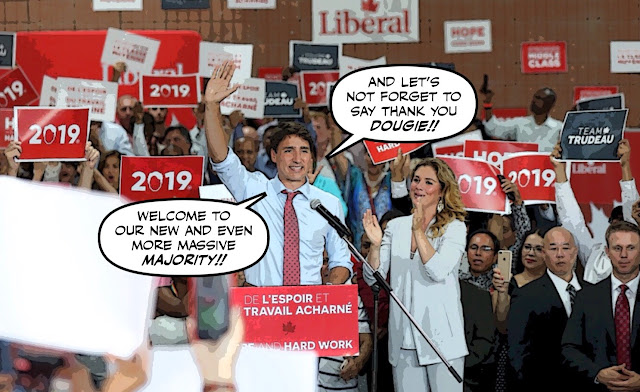 I'm sure Andy's feigned concern sounded better in the original German anyway. Although, the Parliamentary Press Gallery might need to enlist Jane Goodall at the scrums to decipher Dougie Kong's series of growls and ooks. Simon, I don't have the same Photoshop skills as you do, so maybe you can do a drawing of the bigly ape clutching the talking pineapple from Téléfrançais like a hand grenade and throwing it at the CPC's Election HQ. A perfect metaphor for how waging war against Francophone Canadians has blown the Cons' defense of "free speech" (and their election chances) to bits.

What is wrong with the supposed adults on Ford's cabinet. Kind of like Trump's Repiblican enablers.

Don't forget that this follows in the footsteps of the New Brunswick Cons' alliance with an anti-Acadian party that wants to allow unilingual ambulance crews among other things.

My first thought about the Ford move against French was "Of course, he actually thinks he's going to be prime minister after his great successes in Ontario, but he'll never, ever be able to speak French...so, naturally, get rid of all things French! Problem solved."
And along the way, line up right wing English-speaking Canadians to be against bilingualism.

The Fantastic 5 Rockabilly gang are trying to recreate the glorious 1950's. First on the agenda is to undo all of the social laws that have been enacted over the past 60 to 70 years. Nothing personal.. its somewhat similar to taking a modern car and trying to slowly convert it into a 1950's Edsel. First all of the modern safety and communication features are given away to their buddies, then comes the cosmetic changes to the appearance and features, and finally the difficult part of trying to fit a big gas guzzling cast iron V8 into a modern light weight chassis. Its obviously a fools mission with a resulting dysfunctional vehicle stuck somewhere between Edsel and modern. Perhaps starting over is not so bad if everyone ends up in the same boat but what if a competitive nation gets it right and embraces progress instead of cocooning in the past. Will they be charitable?
RT

I'm from Montreal ,and if Scheer could see the reaction to Ford's attack on the Franco Ontarian community in the tabloids and on social media he'd resign tomorrow. Scheer should drive his clown car into Doug Ford's wall as hard as he can, because it will save him a lot of pain later.

Ford did Trudeau a great big favour. It will work nicely in election ads next year. If Scheer is such a good buddy and didn't raise any concerns regarding the French language issue, then what will he do when he is P.M. Not many parents in B.C. want to loose all that French lang. education for their children.

Of course, what Dougie is really doing is taking this for a test drive. If you can disenfranchise French speakers in Ontario and get away with it, which group can he target next and trust me, there will be a next. Perhaps go after signs in languages other than English. Its not like he isn't afraid to use the not with standing clause.

Douglas has let his disdain or more accurately, his bigotry towards the French cloud his judgement, which was sorely lacking to begin with. He is the perfect example of what I'd guess is 30% of white English males who have a hate on for French people, particularly those from Quebec.
As a person with a French last name but no accent, I can easily count hundreds of times throughout my life that I've defended my heritage from these ignorant assholes and their stupid comments, "dumb Frenchman", "frogs", "Pepsis", etc. They all remind me of Douglas in one way or another but mostly being uneducated rednecks. These cuts will be a nice serving of red meat for them.
However, this will not only hurt Scheer, it will hurt Ford as well. Ontario shares a long border with Quebec and the north has a heavy francophone population as well so good luck with that one.
Will it end here or will Doug the Slug have more French programs in his "crosshairs"? Je ne sais pas.
JD

Hi Jackie...yes that’s a brilliant idea. Let’s see if Jane Goodall can decipher Doug Ford’s simian grunts, because goodness knows I can’t. As for the talking pineapple I’ll see what I can do. But first I have to calm down my very angry francophone companion. If Ford, the meathead, doesn’t know where that anger is coming from, he soon will. And it will bury his political career...

Hi UU...according to a story in the Globe they are all terrified of Ford’s chief of staff Doug French, who rules like a tyrant over all of them, including Ford...

Hi Kathleen...yes it does. Ford is too dumb and insecure to admit he has made a mistake. Even if it means banging his head into a wall over and over again, and sending his ugly career into the dumpster of history...

Hi lagatta...yes good point, I wondered whether the Cons in that province would have the decency not to associate with that bigot party. But of course I was disappointed and it serves me right. When will I understand that Cons and decency don’t go together?

Hi RT...anyone who thinks they can go back to the fifties, is clearly unfit to govern anything in the 21st Century. In addition to the jalopy they will find themselves riding, they will sow the wind and reap the whirlwind...

Hi anon....I have read the articles in the Journal de Montreal and other publications and they signal big trouble for Scheer ahead. I think Scheer understands that, but he can’t stand up to Ford without enraging his bigot base, so he’s caught between a rock and a hate place...

Hi e.a.f...I think Scheer got blindsided by the ignorant oaf Ford who hasn’t the slightest idea what he’s doing. Now Ford won’t back down l st he look weak and infuriate his ugly mouth breathing bigot base, and Scheer can’t criticize Ford too strongly lest his ugly base turn on him. It is what I call a lose lose situation, and I’m enjoying it immensely...

Hi JD...ever since I arrived in this country I have heard some English Canadians (mostly from the West) putting down Quebec and francophones. Those bigots disgust me for they clearly have no idea of the history of this country, and the inspired compromises it took to bind it together. Needless to say I love the French fact so much I live with one. French Canadians should be proud of all they have contributed to this country, and I can’t imagine my Canada without them....