Taking Back the Streets of Toronto: My Video 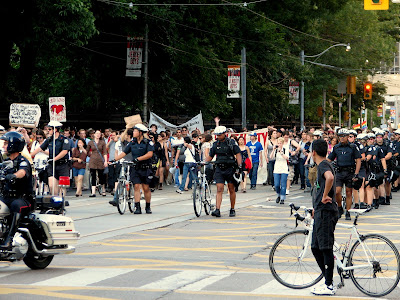 When I heard about this demo.

More than 1,000 loud but peaceful Torontonians – furious at police tactics, the G20 and seeing their city hijacked – converged on Toronto Police headquarters on College Street late Monday afternoon. Parents, businessmen, protesters and grandparents chanted and drummed in front of dozens of police officers before marching through downtown and converging on Queen’s Park for a dance party.

I almost didn't go. After three days of wandering around a city turned into a police state I was just so beat.

But then I thought I just had to go because I want everybody to know that this gorilla show was not all about a burning police car and some broken windows. As some in the media seem to think.

Because I saw it all, or a lot of it, with my eyes wide open.

And it was all about this. 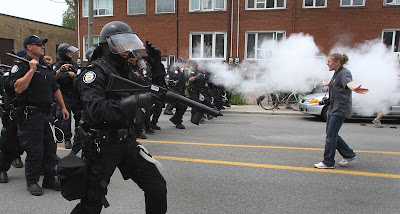 A brutal assault on the people of this city.

By bringing in thousands of heavily armed strangers and throwing up barricades everywhere to regular traffic, frightening off good and decent citizens, Canadian authorities created a ghost town in the heart of our city.

They took our city to hold a meeting and bullied us out of the core, damaging the commerce of thousands of merchants and inconveniencing the entire population. Then, they failed to protect our property

I'm not a cop hater. And I realize they were just following orders. But the way they were allowed to intimidate, jail, and abuse the rights of so many innocent citizens is simply unforgivable.

In Toronto the Good, we saw a law passed and enforced that was more anti-democratic than the War Measures Act. And we saw twice as many people arrested over a single 24-hour period in Toronto -- more than 900 at last count -- than what took place during the October Crisis in Quebec 40 years ago. And that event is in our history books as the most notorious abuse of civil rights in modern Canadian history.

And I'll never forget the hatred in the eyes of some of them...as if we were THE ENEMY. 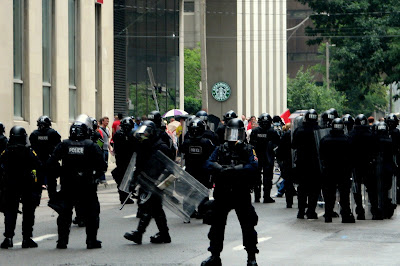 Or the way I was almost arrested several times for doing absolutely nothing. Just staring at that Planet of the Apes spectacle with my eyes AND my mouth wide open.

And rage in my heart.

So anyway I dragged my weary ass to today's demo.

Because it was awesome. Young and old together. And the sweet sound of FREEDOM.

I just hope Great Ugly Leader and his fascist monkey gorilla Con thugs got the message. Because if not we'll have to remind them over and over again eh?

Canada is not a police state.

And the streets belong to the PEOPLE...
Posted by Simon at 2:45 AM

Simon, don't get too optimistic; Redneck Ryan Doyle of NEwstalk 1010 is back from his vacation with avengence, doing the bidding of Master Steve and Chief Blair Police Brutality, you know the bombastic radio host who thinks shoplifters and pot smokers should do 10 - life in a Turkish Gulag styled prison. He's got Torontonians buying this garbge judging by the calls he got last night. And those calls from folks who dared disagree with him and actually produced facts were interrupted, overpowered, and then hung up on, followed by him declaring victory; you could almost hear him thumping his chest.

Simon he's dangerous and because of radio hosts like him, TO could vote in a Harpercon majority.

He even had some who were arrested for nothing and brutalized more than likely apologizing for being at the wrong place at the wrong time.

He is the type that would blame a rape victim for wearing a short skirt.

Simon, Did you catch this little barn burner today?

Blair in addition to being a brutal fascistic tyrant, can also add big fat lying scum to his repertoire

Kilgore: Smell that? You smell that?
Lance: What?
Kilgore: Napalm, son. Nothing else in the world smells like that.
[kneels]
Kilgore: I love the smell of napalm in the morning. You know, one time we had a hill bombed, for 12 hours. When it was all over, I walked up. We didn't find one of 'em, not one stinkin' dink body. The smell, you know that gasoline smell, the whole hill. Smelled like
[sniffing, pondering]
Kilgore: victory. Someday this war's gonna end...
[suddenly walks off]

hi anonymous...how did you know that's one of my favourite scenes. The Horror...The Horror... ;)