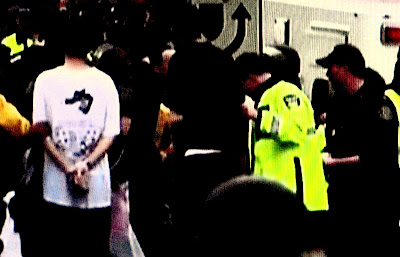 With a raging thunder storm, and one final spasm of madness.

With police charging a peaceful group of protesters, photographers, and people just caught in the wrong place at the wrong time. 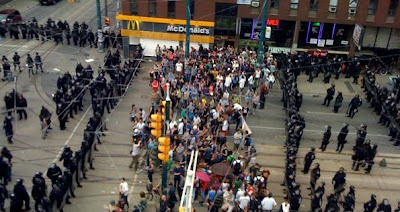 Leaving them sitting in the pouring rain for hours.

And then arresting them one by one.

You guys are saying 'Wrong place, wrong time'," a police officer said to two detainees who argued they were just passing by. "Yup," replied a young man in his early 20s. But that didn't make any difference -- the handcuffs stayed on and the two continued to be processed by officers who read them their rights and told they they had the right to call a lawyer. Whether or not they had the opportunity to call a lawyer is a different question.

And all I can say is how very fitting. Because this Gorilla Show has been insane from start to finish.

The bottom line? The police lost control of the situation because they were too obsessed with keeping protesters from getting within three blocks of this fence. 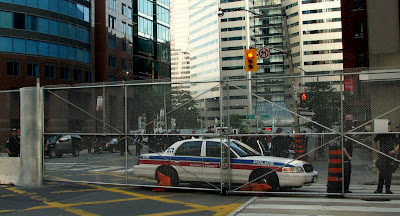 So they allowed vandals to run amok in other parts of the city.

And then over reacted by treating innocent citizens like CRIMINALS.

The peaceful protesters got burned by these sinister goons.

Who drowned out their message. Turned ordinary citizens against all the protesters. And allowed Stephen Harper to claim today he was right to spend a billion dollars on security.

When of course all it showed was that he was CRAZY to hold a summit in the heart of Canada's biggest city.

Tonight the protesters were all suddenly released, without any charges being laid.

Which leads me to believe that the Toronto police have a lot of embarrassing questions to answer.

And I've got two good ones eh?

Who the hell gave them the idea that we're living in a police state?

And when do they plan to arrest him? 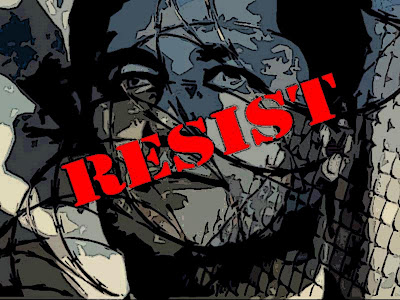 the black bloc were agents provocateurs; too many things simply don't add up: I posted a few items at my place, as well as some of my brother;s pictures of the events

I also link to my brother's flickr page as there were just too many to post on my blog at one time.

I guess I should be relieved my father didn't get turfed from his hospital bed. He remained safe. I remember being both nervous and outraged when I read that many hospitals were turfing patients to empty beds for G20 stuff. My father who can't communicate for himself; so vulnerable and sick who paid his taxes. This has become the new world order according to Steve

And so was this three ring circus, including fake police cars; go to Dammit Janet's to find out more; also 2 photos; look at numbers on both cop cars in pics:

I am thoroughly disgusted at all the anecdotal accounts I read on Twitter; yes, I was glued to the Twitter feed all week-end and watched the videos. Disgusting doesn't begin to describe it. I can't find any words bad enough to describe this.

Go to BeneDictions for more.

I am speechless and worse, I'm too wired to sleep and i gotta be up for work tomorrow.

Luckily my mother is safe, but I haven't heard from my brother today. Last night he was safely at a party and uploading his day's photos. I hope he was as lucky today. His g/f hasn't respeonded to me neither.

As for me, I am thankful to be home in Montreal, but kinda guilty not to be in TO with my family.

By the by, apparently this week-ends arrest tally has surpassed that of the Quebec October crisis, which spanned more than one week-end if I remember my history correctly.

" . . . Leaving them sitting in the pouring rain for hours.

The process is called "kettling" and it's an entry in Wikipedia.

This whole weekend and all the repercussions will drive Harper from any chance of majority government--possibly even an opposition victory.

His millstone around his neck will drown him. His career in politics is coming to an end such that he won't be in public office come the new year.

Crafty of him to arrange the meetings after the House had risen for the summer and thereby to avoid anything like question period or the press during a session.

And to think, his heros were Preston Manning, John Howard, George Bush.

And where are they now?

And does any one of them have a legacy of which they can be proud?

The Hall of Shame will soon have Harper to join their rogues' gallery.

hi CK...there may have been some double agents in the ranks of the anarchists, but there were enough of the real ones too. When I saw a bus full of people unloading, and I recognized some of the characters from Parc Berri, I knew there would be trouble.
And yes it was a hideous show. I walked the soles off my sneakers and I just can't describe how threatening and surrealistic it all was. Never ever again.
Unless of course Harper get a majority and then it will be all the time...

hi Torontonian...I hadn't heard of the expression "kettling". But I believe it now. A bunch of cops acting like teabaggers. It was simply disgraceful and those who gave the orders...particularly at Queen and Spadina...should be asked to explain their actions. But I noticed that operation was an OPP operation and I suspect that tinpot sheriff Fantino was responsible.
And BTW I forgot to mention not only were they forced to stand in the rain and the lightning, they weren't allowed to get water, or go to the washroom. And although they had a sound cannon standing by there was NO communication.
I hope you're right about this hurting Harper, but I fear he could use the vandalism to boost his phony law and order agenda.
We live in dangerous times...