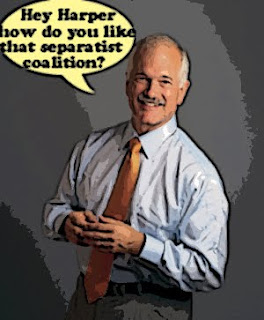 According to the results published in Monday’s edition of La Presse, the Conservatives led by Stephen Harper would defeat a coalition led by Michael Ignatieff 40-34 per cent.

However, if the coalition were to propose Jack Layton as prime minister, according to the Reid poll, it could defeat the Conservatives by 43-37 per cent.

With the prospect of Mr. Layton in the prime minister’s office, 44 per cent of Quebecers would vote NDP — 10 per cent more than the Bloc.

I also find this encouraging.

Both parties are equally enthusiastic about a "shared power" scenario (72 per cent LIB, 70 per cent NDP).

And of course this is a BONUS... 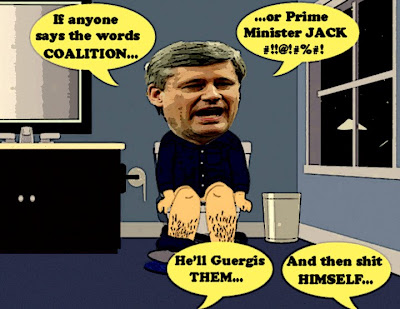 Because although this is a just a theoretical exercise, I'm sure it's horribly real for Stephen Harper. And for the Con flunkies who wipe his bottom.

And with good reason, because it shows that Quebecers are not so wedded to the Bloc, that they wouldn't support another leader who could bring down the Cons they hate so much.

And it also suggests that despite Great Ugly Leader's attempt to demonize the idea of a coalition, it's not going away.... it's just getting STRONGER.

But then I'm not surprised eh? A good idea is a good idea. There is nothing more Canadian than compromise. A coalition is its highest achievement.

And I always knew that from a small but beautiful beginning... 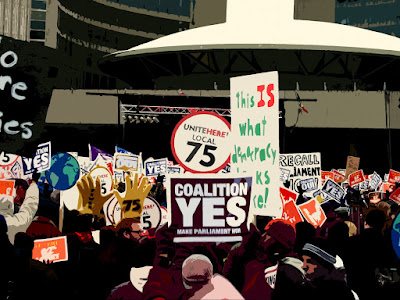 Would one day spring a mighty movement that would sweep these ugly Cons from power FOREVER.

I realize it won't happen overnight. Some on both sides will cling to old ideas until history runs over them.

But we are a young country that can still do anything we want. So it WILL happen.

And with our country in great danger the sooner the BETTER...

FYI - that poll didn't ask about coalitions, but about an NDP-Liberal merger, i.e. a brand new party formed by merging the Libs and NDP, so neither party would exist anymore in its own right - total opposite of a coalition.

@Radical Centrist: I think the poll asked about a "combined" NDP and Lib which in the minds of many voters, informed as they are (sarcasm alert !!), could either mean a merger or a coalition. Thus Simon is correct to think about it as a coalition.

Spector (never thought I'd be quoting him, ughh ...) also referred to the poll as a "coalition" between NDP/LIb. Here is the link: