The Police State in My Neighbourhood 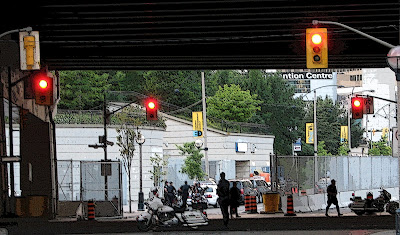 As the police presence in my neighbourhood continues to grow by the hour.

Not just in the streets, where now they're starting to ask you to show your papers please. 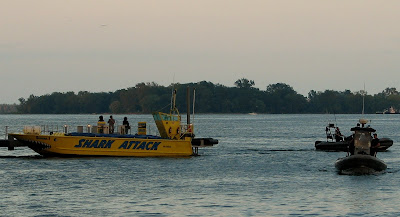 As the atmosphere grows more tense and oppressive.

It's really weird eh? It still looks like Canada.

The core of the city, bisected and encircled by fences, which one can’t see through or over, patrolled every minute by squads of police, feels more like Cold War-era Berlin. Anxiety fills the air.

“There’s hardly anybody at work. It’s like a skeleton crew,” added Ms. Ellery. “You feel like you’re in the zoo, Berlin Wall, in a different country. Every day last week you saw more police. First Toronto police, just a few, and then groups of four, and then more groups of four, and now Mounties. It’s crazy. It’s weird."

It's like a bad dream. The Harper majority, the police state, the sirens, the 30-car motorcades, the flashing red lights... 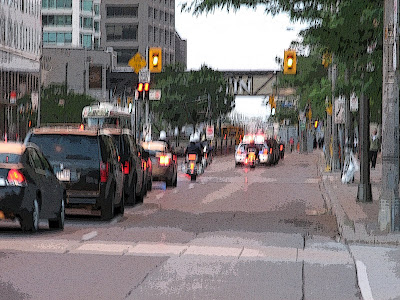 The preparations are staggering — so staggering someone should have given their head a shake over the wisdom of hosting the leaders of the 20 economically strongest nations in the world in one of the busiest downtowns in the Western world.

And all for what? Can you name the top achievement to come out of each of the last four G20 summits? This level of disruption of citizens’ lives is unacceptable in a free country.

And when the Grunter cries fascism you KNOW we're in trouble.

But then I remember that so is Stephen Harper. And I feel so much better.

Because the bottom line is that a billion dollars is a lot of money for a three-day whoop-de-do.

To understand the challenge of plowing through that much money that fast, consider the sheer magnitude of a billion. If you were lucky enough to have $1 billion in $1,000 bills, stacking them would require 10,000 piles of 100 each. Or think of it as some industrious internet mathematicians have: A billion minutes ago Jesus was alive.

And we may be paying for this summit now, but Stephen Harper is going to pay for it LATER. Over and over again...

Apart from boggling minds, the billion-dollar summit cost threatens the Prime Minister’s reputation as a prudent manager. It’s a small jump from summit security costs and a fake lake to awkward questions about how wild spending has turned surpluses into deficits.

So sure. This gorilla show may be sinister and scary.

And a monumental pain in the ass.

But if it has a happy ending. 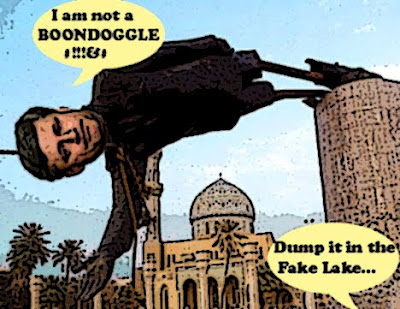 There is very little real life south of the Windmill Line. Your posting proves that.

It was even worse in the 1950s and 1960s when it was only docks and vacant land used as parking lots.

hi Torontonian...are you insulting my beautiful neighbourhood? Shame on you. ;)
I admit it does have some drawbacks, when I'm feeling lazy downtown can seem very far away. But I grew up by the sea, and then the St Lawrence, and Sébastien comes from the cool clean fjords of the Saguenay, so we both love it by the lake.
Or we did, until it became a prison camp. But don't worry Harpo is going to pay for that one... :)