The Gaza Flotilla and the Ship of Fools 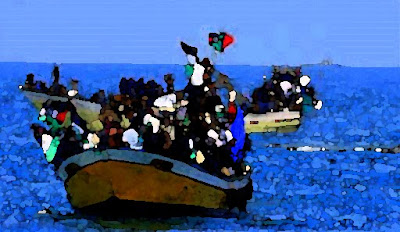 I'm glad to see that after sowing yet another bloody wind, Israel's right-wing government is reaping a raging whirlwind.

Because they so deserve it. What were they thinking? Did they think the world would cheer a commando assault on a humanitarian convoy?

Or believe them when they blamed the victims. 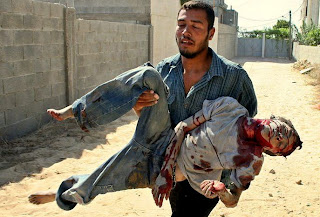 Shame on them, didn't they learn ANYTHING?

Don't they even know their own history?

The refugees had no legal authority to enter Palestine, and the British were determined to block the ship

On July 18, as the ship neared the coast of Palestine, the British Navy intercepted it. Captain Ahronovitch tried to break through, but two British destroyers rammed the ship.

Several hours of fighting followed, with the ship’s passengers spraying fuel oil and throwing smoke bombs, life rafts and whatever else came to hand, down on the British sailors trying to board, The Times reported at the time. Soon the British opened fire.

Two immigrants and a crewman on the Exodus were killed; scores more were wounded, many seriously.

Don't they realize that by trying to strangle that little ghetto called Gaza they are corrupting their own soul?

Oh boy. As Gideon Levy wrote before the assault on the flotilla, what a ship of fools.

The propaganda operation has tried to sell us and the world the idea that the occupation of Gaza is over, but in any case, Israel has legal authority to bar humanitarian aid. All one pack of lies.

Again we will be portrayed not only as the ones that have blocked assistance, but also as fools who do everything to even further undermine our own standing.

This crazy bloody game has gone on for too long. And everybody is losing.

Only by freeing the Palestinians will Israel will free itself from its own bloody delusions, that are making it a rogue nation in the eyes of the world.

Now more than ever end this evil occupation.

Give peace a chance.

I'm honestly tired of that whole Israel can do no wrong thing from the right and these zionists. What's worse is that in typical ignorant fashion, 'informed' with only the kool-aid doled out by corporate media outlets (of course they would never listen or read Al Jazeera)or sometimes, none at all. All they hear is Israel=good Palestine=bad.

I just feel terrible that those much needed supplies like food, medicine, and wheelchairs are not going to get to the poor people who need them the most.

Why, how does Israel have legal authority to bar humanitarian aid?
Because to get it to Gaza it has to pass thru their borders, be it on land, water, or air?
Money could be sent in the mail, or wired tho, right?

Oemissions - Israel doesn't have the LEGAl authority to bar either Humanitarian Aid OR the thousands of items, including food, medicine, & building material, that it blocks and forbids from entering Gaza via normal routes. The Embargo of Palestine is ILLEGAL by International Law. It always has been. So because some supporters of the Gaza people come by ship to bring them Aid (because of the illegal embargo, remember), Israel adds illegal to illegal by attacking the peaceful & unarmed ships in INTERNATIONAL WATERs - an ILLEGAL act of Piracy under Int. Law. And then Israel says WE are the victim here! Maze-like doesn't even being to describe their thinking...

hi CK...like just about everybody I know I'm sick of that neverending conflict. I want to see serious peace talks and the creation of a Palestinian state that can live in peace with its neighbour. But right now I'll just settle for the lifting of this cruel and inhuman blockade...

hi Oemissions...Israel has no right to bar humanitarian aid or anything else for that matter to enter Gaza.
And certainly not if it comes in from the sea because the sea opposite Gaza belongs to that little enclave not Israel. But of course in the end it's a moral matter and the way it treats the poor people of Gaza is simply unforgivable...especially considering the trauma they recently experienced. I'm hopeful though that it may lead to an end to the blockade, and cause Israel to take a good look at itself, and maybe something good will come of this wretched act of piracy...

hi CanNurse...you know one of the things that puzzles me is how the Israelis seem to have lost their bearings. They're the dominant military power in the Middle East but still they seem threatened, and they can't understand that what they're doing is only making them more enemies.
I think I'm going to have to write a post about this... :)