The Merger: My Horrible Morning After 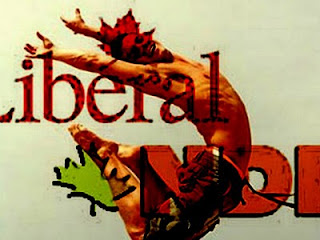 Gosh. How embarrassing. I should have known not to get so carried away by the idea of a Liberal-NDP merger.

Did I really say it was morning in Canada? I guess it was a bit of a premature ejaculation.

Gawd. What a horrible morning after. I should have known I'm living in dreary old Conada where every new idea is greeted with a shudder or a scolding.

Because it's all about the Liberals and the NDP and not about the future of Canada. Right?

So you'd think I'd be depressed eh?

That my wounded spirit would be spiralling gently down to earth. 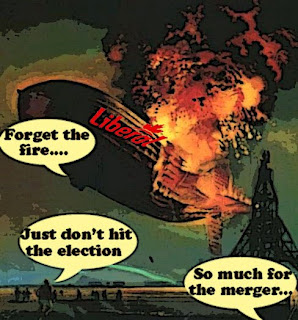 Because if these are the terms of the merger.

I'm not interested. Whatever happened to the idea of choosing a new leader?

Oh well as I've said before, the main thing is that both the ideas COALITION and MERGER are out of the bag. They can only grow as the situation becomes more and more desperate. They'll never be as frightening to the crusty inhabitants of this country, as they were the first time.

And sooner or later the mathematics will become unavoidable. A divided left facing a united right is a recipe for disaster. And doing the same old thing over and over again, while going  nowhere, is the definition of insanity.

Especially when your country is BURNING.

So all I can say is... now that the merger flap is over, let's concentrate on finding ways to cooperate and keep talking up the idea of a coalition whatever our leaders say.

And thank goodness I've got more than just Canadian politics to get excited about.

Wow. What a concept eh?

The elephants, the lions, and the ostriches playing together on the same team !!!!!

Oh no. Now it's raining. Uniting the left is just too hard. I give up.

What pisses me off about this merger talk is that it's taken away the momentum that's been building over all the costs of the G8/G20 which have been making Harper & the Cons look very, very bad. Now the focus has been changed - we should be continuing to hammer away at the Cons & keeping this in the public's awareness. Now it's all talk & media attention to Lib/NDP merger, which isn't going to happen.

Kinsella is an idiotic attention seeker & couldn't have picked a worse time to feed his ego.
Bet Harper's just rubbing his hands with glee, & relief, as the focus is now off of the costs. Kinsella has just given a big gift to Harper. Creep.

I had difficulty understanding Kinsella's motivation in speaking on camera about it - unless it was done simply to throw it up the flagpole. I agree with Penlan that the timing seems off, since it distracts from a serious attention-getting spending scandal that is liable to damage the Cons politically.

I can't imagine the right-centrists in the Liberals sticking with the newly merged party. They would probably try to keep at it with some new party that would pointlessly take the space once reserved for the Progressive Conservatives when the Reforms were around. That is why a Green-NDP merger, with the support of some left-leaning prominent Liberals, seems like a more plausible way of uniting the left. Green supporters would not bleed too much to a Lib-NDP merger - we're used to being marginalized already.

Currently 12% or so of Canadians prefer the GPC, and precious few of them would stray to the Cons. Anyone trying to unite the centre-left does their cause a disservice in excluding that Green support from their calculations.

I don't get why people still vote Liberal. The party isn't the same as it once was. Time to move on, no? I don't get it.

hi penlan...as much as I'm mesmerized by the sound of the word merger, I'm afraid you're right. At this stage it's just a distraction.
But don't worry it will quickly pass and this summit and its aftermath is still going to make Harper look really bad.
As for Kinsella...I don't know the whole story. And since he hates the Cons almost as much as I do I'm going to have to give him the benefit of the doubt... ;)

hi Scott...I think Kinsella was probably just reflecting the panic in the Liberal Party at the way the polls just keep going down and down.
But the whole idea of creating a new party from the top down doesn't seem right to me anyway.
I'd much rather see a broadbased approach that invites supporters of other parties to join. So we could create a whole new party that would represent most progressive Canadians. A name is just a name, but power is power... :)

hi prin...there are many Canadians who still remember the glory days of the Liberal Party. But sadly times change, and we must change with them.
And since when is new and exciting a bad thing anyway? I don't just think that this country can handle it, I think it desperately needs it...