The G20 Gorilla Show: My Video 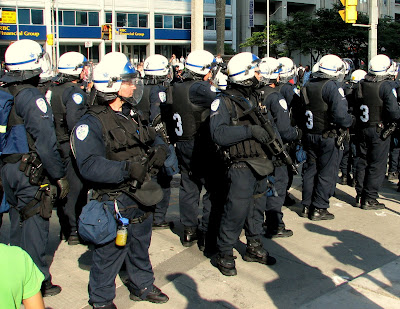 As I said about a week ago, I've always wondered what it would be like to live in the kind of police state Stephen Harper would create, if he ever got a majority.

Wearing bulletproof vests and helmets with the visors down, some 30 officers shoved their way through the crowd.

“This is what a police state looks like!” shouted one man before an officer sent him reeling with a kick to the groin. Another man was shoved repeatedly by police as he lay on the ground.

Because I've never seen so many police officers, there were many tense moments. And it almost turned into a nightmare on Elm Street.

While a double line of officers in riot gear, holding shields remained at the front, about 200 extra officers, some on horseback, stood ready to reinforce them from behind. Officers also locked the gates to the perimeter fence for the first time.

It all ended peacefully, but with so many police and so many demonstrators, on a brutally hot afternoon, it could have ended horribly.

But you be the judge, because I made this video...

The bottom line: we need these summits like we need a hole in the head.

And by deciding to hold this gorilla show in the heart of the country's biggest city... 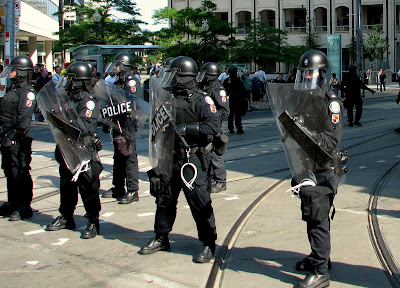 Stephen Harper has clearly shown he is unfit to govern.

Because only in my nightmares.

Is this my Canada... 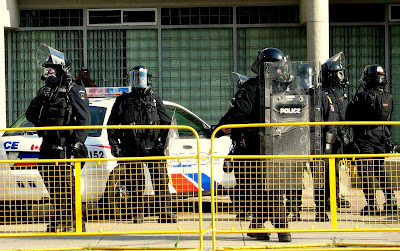 thanks for being there.
since i began a campaign to Think Global. Protest Local, I didnot make the long journey from the Westcoast.
A Greenpeace bus with 50 or so passengers .
I was tuned to the CBC and internet all day.The Torontoist had very upto the minute livefeeds and lots of tweetpics.
In the evening, rabble.ca live streamed the People's Summit. Rousing talks from intelligent, experienced speakers.
Pablo Solo from Bolivia spoke for humanity, the people.
He has proposed a Universal Declaration of the Rights of Mother Earth.
And a global referendum.
Dave Coles on the plight of workers, Vandana Shiva,Amy Goodman with the story of media arrests at Republican convention and yesterday's detainment at border of CodePink ladies; our courageous, snappy Maude Barlow and ofcourse Naomi Klein, who invited everyone to join her in a walk back to the Park to join the other protestors in solidarity before saying goodnight and... see you tomorrow, on the street.
from Oemissions

Look at those cowards, Simon! The only way they can face an unarmed, civilian crowd is in fucking body armour??? What's the old saying? "People should not fear their government; it is the government that should fear the people". And so it should be. We should make these neocon/neoliberal/christofascists quake in their fucking $1,000 shoes and Saville Row suits. We should make their hired thugs and Geheimstaats Polizei wondering if THEY'LL be stopped and searched and humiliated. We need to wake up, folks, and take OUR Canada back out of the hands of these criminals and their unquestioning, thuggish minions!

I do take one small comfort in all of this; once the suits have gone home to spout platitudes, once Harper's sad little puddle has been drained and his fuhrerbunker dismantled, once the armour clad little piggies have been sent back to their own districts with fat, taxpayer funded OT cheques and their porcine, law-and-order bellies full of tax-payer funded prime rib and Timbits you can rest assured that Harper will never, EVER win an election in Toronto.

Meh. This is just the closest Toronto will ever come to feeling like Montreal. :D

The rare time I'm on the cops' side- there are always shit disturbers who ruin it for everybody, and in this particular situation, it's understandable that the cops would be oppressive at the first hint of those asshats emerging. Oppressive cops are one thing, but having all night riots on international news is another entirely. And as a Montrealer, I gotta say, I'd rather see the cops on the news than smack my forehead with every frame of vandalism in my favorite city shown on the 11 o'clock news.

hi Oemissions...I quite enjoyed myself although there were a couple of tense moments when I thought either my head or my camera might be broken. Please please take my head... ;)
Unfortunately I wasn't able to attend today's protest because I had to work, but I was there in spirit. And so was Sébastien... in his locked down hospital.
I've always thought that Canadians are an apathetic people, but now I might have to change my mind... :)

hi Neil...yes it is a ghastly spectacle isn't it? I know the police are just following orders, but their intimidating presence in my neighbourhood really bothers me.
Some of the cops are reasonable, but some strut around like an occupying power, and treat people like they are the enemy. It's simply intolerable, and like you I also blame Harper. I can only think he's trying to punish this city for not voting for him. But if that's the case he's going to be disappointed, because I'm sure this experience will only make our aversion to him and his thugs even stronger.
So you know what they say? In every cloud of tear gas there is a silver lining... :)

hi prin...yes it did bring back some fond memories of Montreal. Especially when I came across the Montreal Police riot squad, banging their shields. It was almost a sentimental moment.I almost went up to one them and welcomed him to the city in French, but he was carrying a rubber bullet gun, so I decided I better not... ;)
But yeah the mindless vandalism is depressing. It plays right into Harper's hands. But I knew there would be trouble, because I saw a busload of Montrealers arrive, and they included the gang from Parc Berri. Why the police couldn't isolate the troublemakers is beyond me, and now everyone is paying for it...