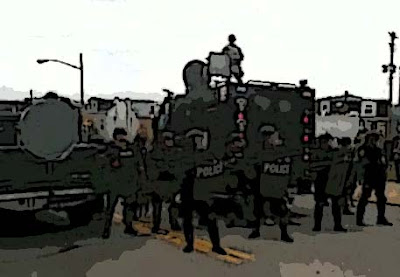 I knew that if I lived long enough in Stephen Harper's Canada I'd find out what it's like to live in a police state.

And since I live right next to the G20 Security Zone that time has finally arrived.

Police working during the G20 Summit here later this month will have rubber bullets, police dogs and sound cannons at their disposal when dealing with rowdy protesters.

And if this hurts my ears.

The larger sound cannon, which can reach 140 decibels, will be mounted on a boat and used to relay messages from Lake Ontario. The LRADs have the ability to be heard from up to 2.5 kilometers away.

The commonly accepted pain threshold is between 110 to 120 decibels.

This chills my blood.

Injured detainees will be treated in a 10-foot-by-30-foot trailer where water is provided by a hose...The role of the physician in this team is intended to deal with short, acute interventions which should result in a patient being discharged back to police custody (e.g. simple wound care). These patients would otherwise need transport to hospital.

“I am assuming that these patients are a fairly young, healthy population, and some of whom will probably claim factitious (sic) injury as part of their tactics,” the email continued.

Because this is an outrageous violation of medical ethics. And any decent doctor should refuse to be part of such a factitious fascist scheme.

You know when I first heard that the Cons planned to spend more than a billion dollars on summit security I figured it was just a way to bribe police officers with oodles of overtime. To try to buy their votes.

To try to make them forget these Cons want to kill them by scrapping the gun registry.

Even though police are using it more than ever.

Or just another way to spend the country into debt, so they can cut government to the bloody bone.

But now I'm starting to also see it as a dress rehearsal for a police state...and the social unrest that would follow a Harper majority.

Because a government that is making a mockery out of our democratic institutions, while spending billions on security and new prisons is capable of ANYTHING.

Look I realize you need good security at a summit. I have no sympathy for violent protesters. These water cops are usually pretty friendly... 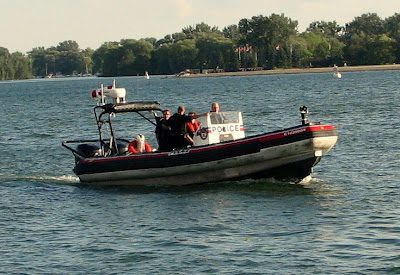 But I've said it before and I'll say it again.

Wakey wakey Canada. These hideous thuggish Cons are taking us to a place where most of us don't want to go to. A dark authoritarian jungle of a country where Parliament is a rubber stamp, theocracy rules, and human rights aren't worth the paper they're written on.

Oh well. It's going to be interesting finding out what it's like to live in a police state.

But at least I already know something eh?

Those Cons cannot be trusted.

If that sound cannon hurts our (human) ears, imagine what it feels like for a dog or any animal whose hearing is so much more acute than ours.

Not so bad, they say? Fuck them, they've obviously never been exposed. 120 decibels or more causes permanent hearing loss! I wonder if that LRAD makes police K-9 units go berserk with pain. If it does, at least they won't be able to set the dogs on the people. Unless they put earplugs on them, too.