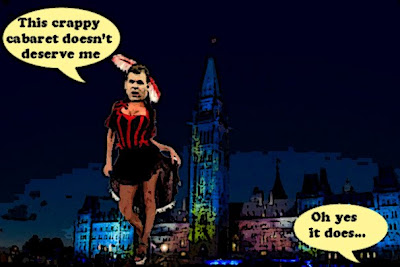 Golly. How exciting. Pass me the envelope. And the winner is..... *gasp*....here she comes Miss Parlee...ment.

“Every now and then I want to say, ‘Who is the real John Baird?’ ” says Liberal MP Rob Oliphant. “Is he that charming, boyish kind of person who is trying to win over the hearts of people? Or is he the pit bull?”

Oh. My. Johnzilla. Can you believe it? I guess he must have clinched it on the strength of this doggy performance.

At one point, Baird repeatedly bellowed over the committee's chair, Liberal MP Yasmin Ratansi, and tried several times to present a point of order, despite not being a member of the committee. Ratansi threatened to have the minister removed by security, while Baird charged that Ratansi didn't know how to do her job.

At least I'm almost sure that's what the VERY bitter Jason Kenney must be saying tonight... 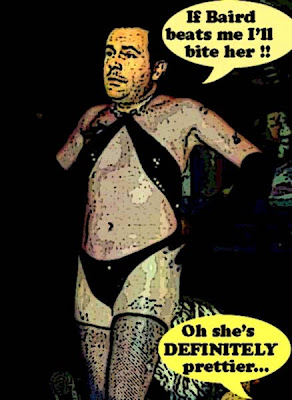 Because as you can see, La Jason aka "Chastity"  was desperately hoping to win the Miss Parleement  Award for the SECOND year in a row.

It’s not surprising that the phrase “attack dog” crops up in an interview about Immigration Minister Jason Kenney.

What is unexpected is that Kenney applies the term to himself. Asked about his parliamentary style, he volunteers, “I think when I was in opposition I developed a reputation as an attack dog.”

But you know I do believe I see a theme developing: Cons.....attack dogs....screamers... PANTYHOSE.

Yikes. So much for that award. Only in Ottawa eh?

Oh that. Don't ask. Just be grateful you know how low we have fallen. Because so many don't. The idiots.

Just call it the Rideau Cabaret...or the Blue Parrot.

And sing along with Chastity and Johnzilla....

Baird and Kenney are emblematic of how the Conservatives now pander to the public.

It's hard to imagine any noble-minded person wishing that party's leadership of a nation.

Unfortunately, the party is filled with many more of them and most of those are in camera view during Question Period.

I want fair value for my tax dollar and this government is not giving me value for money.

Nor is it giving us any leadership.

Imagine spending more than $ 1 Billion just to have a seat on the Security Council.
-----
You may remember that during difficult times, US citizens used fake Canadian passport covers over their own US passports to avoid anti-American "sentiment".
Maybe the time has come for us to switch with the Americans and use fake US passport covers on our international travels.

And we start taking to the streets when?

Bang on! It's a short distance between nasty queens fighting over a drag pageant tiara to nasty men in suits disguising their own self-contempt with a display of fierce loyalty towards a cold, soulless daddy-figure. Psychological warfare on a club stage is fun; played out the national stage it can destroy a country.

I wonder how much the pressures of the closet in a socially reactionary caucus is affecting Baird's behaviour?

hi Torontonian...I remember how disgusted I was when Kenney won the award last year. That was bad enough. But to award it to John Baird after everything he has done to disrupt Parliament is outrageous. It really makes me question the clubby atmosphere on Parliament Hill. Surely those who participated in the questionnaire could have come up with someone better.
But you're right. Once I was proud to wear the Maple Leaf on my back when I travelled. But these days I'm embarrassed. And as a person who tries to be as noble-minded as possible...despite my numerous failures ;)... this government doesn't meet my standards of acceptable behaviour. And I can't wait for the day they're defeated...

hi Charles...I'm glad you liked this post. I wasn't sure that people would get what I was trying to say. And that although I admit I had a fun time writing it I did have a point to make.
The good news? I was going to use the Liza Minnelli version of Mein Herr, but I couldn't find an embeddable version, so I used the one I did, and
I greatly enjoyed it... :)

hi Cliff...yes that's a good point. I didn't want to remind people he was gay. Can you blame me. ;)
But I think that a gay man working at the heart of such a homophobic government probably has to over compensate, by being even MORE of a right-wing asshole than the rest of them. And when the guy is trying to impress a man like Stephen Harper, the resulting behaviour can only be described as PATHETIC. He may be a nice guy personally speaking, but he'll always be a shameless stooge to me...