Carly Fiorina and the Demon Sheep 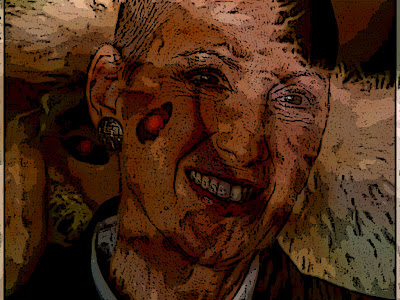 I try to stay away from writing about U.S. politics these days because things are crazy enough in Canada. But I have been keeping an eye on Carly Fiorina's Republican nomination race for the U.S. Senate.

Not just because the former Hewlett-Packard CEO was endorsed by Sarah Palin, and as you know I believe her to be the Anti-Christ.

And Fiorina targeted her Republican opponent, the relatively moderate Tom Campbell, with what many have described as the most outrageous attack ad EVER.

And I really loved the way the Democrats turned the demon sheep on Fiorina.

And the other Republicans in the race...

But still she won.

And now she's going after her Democratic opponent Senator Barbara Boxer, by portraying her as a leaking hot air balloon... 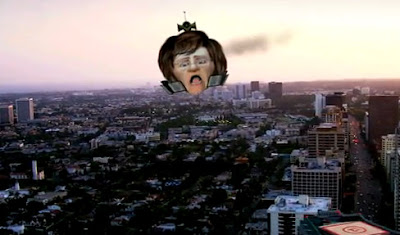 And attacking her HAIR !!!!

So now all I can say is only in America eh? Sarah Palin IS the Anti-Christ.

And you won't want to miss my new video.

Stephen Harper and the Demon Sheep.

Because it's even SCARIER... 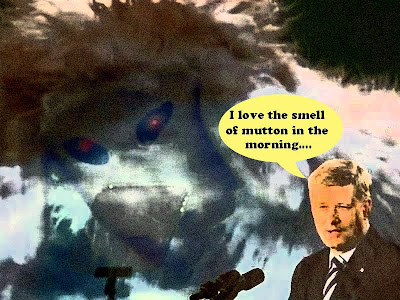 The visuals are smooth and slick and end up message. It speaks in the well established language of movie trailers and so it is partly ignored/pigeonholed as it is being watched as the iconography is so familiar.

The way the first video was done resonated as an internet video, cheesy and a bit rough but somehow more sincere(if you know nothing about CF..and a lot of CA residents probably don't). It sounds to me like they got someone with a Bostonish accent to do the later voice-over. Perhaps another folksie touch?

re: the merger post. I was excited too. Love the whole morning after slant. I was thinking later though that if the Liberals and NDP did merge then we'd be falling into the same trap that the US has, the 2 party system there doesn't seem to work well at all.

he prin...she won, she used six million dollars of her own money, and now she has to convince Californians that a social conservative who thinks that global warming is just "bad weather" deserves to represent them.
Good luck... :)

hi Stewart...you're obviously more of an expert than I am, but I agree with you. The Democratic response was hilarious but overproduced and tried to hit too many targets at the same time. But it did bring her down to earth on the Hewlett Packard front, and I think the idea of her cruising above the pain and misery of ordinary Americans in one of her SEVEN corporate jets is a concept definitely worth developing. :)
As for the merger talk, I'm just encouraged that the subject has been brought up because you've got to start somewhere. But I'm not as worried about the two-party system, as you are. If we had proportional representation it would definitely be a loss. Because considering how our country is a monument to compromise, it seems to me the most Canadian way to govern. But the fact is our country has been heavily Americanized by what's happening in the U.S. The politics of polarization is here whether we like it or not. And I don't. But if it's the only game in town we might as well play by its rules, or watch helplessly from the sidelines while they pick us apart, and destroy our country.
And then of course there is how to make sure that Quebec isn't left out. That's a tough one, but I'm working on it... :)