Stephen Harper and the Poison Pill 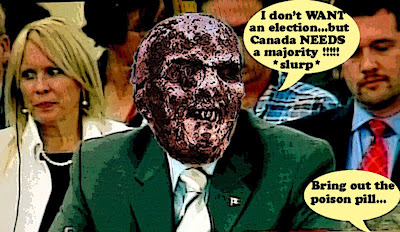 Uh oh. I see Stephen Harper is getting ready to deliver an economic statement.

The kind the Parliamentary foodtasters have to lick before they dare table it.

And I can only imagine what a state of arousal Great Ugly Leader must be in...walking around hunched over, getting a tongue bath from John Baird to try to bring down his raging fever. Or just thrashing around on the floor biting the carpet. And asking God what he would do.

Because it's going to be really really hard to keep that mask on, and pretend he doesn't want an election, when he can practically SMELL a majority.

Prime Minister Stephen Harper is outshining rival Michael Ignatieff and putting the Conservatives on track for a possible majority in the next election, a new Angus Reid Strategies/Toronto Star poll has found.

And he's slurping with agony, because he can't decide whether to force a poison pill down Jack Layton and Gille Duceppe's throats. Or shove one up their asses.

Although that's the thing that worries me eh?

I don't understand why the Liberals are in such a hurry for an election. Why would they take shots at the NDP when one day they will have to work with them?

Shouldn't they be thanking them for finding a good excuse to delay an election? And saving Ignatieff from HIMSELF.

You know... stopping his mad charge up the hill from turning into a massacre. Or preventing his peaceful picnic in the Enchanted Forest.

From turning into a Stephen Harper nightmare...

Golly. From playing dead to BEING dead. Is that progress?

Can we really risk having an election at this time...and handing Harper the majority he craves so much?

Can you miss the trees for the enchanted forest ? Does a bear shit in the woods?

You know I love my Liberal friends as much as I love my NDP ones. But impatience isn't a virtue.

Nowadays, they have Jack Layton.

They just don't make them like they used to--leaders, I mean.

Find me one leader among the lot who can hold even half a candle to Trudeau or Pearson.

We don't vote in governments, we vote out parliaments.

Time for us to get to work and get these boys out of there.

hi Torontonian...From what I learned in school some of the best governments in this country happened when the Liberals and the NDP worked TOGETHER.
So I can't see why it can't happen again.
Because....here comes the broken record...until the centre-left unites or forms a coalition the Cons will ALWAYS have the advantage.
You know I wasn't very good at maths...but even I can figure out that one... :)