Michael Ignatieff and the Spideyman 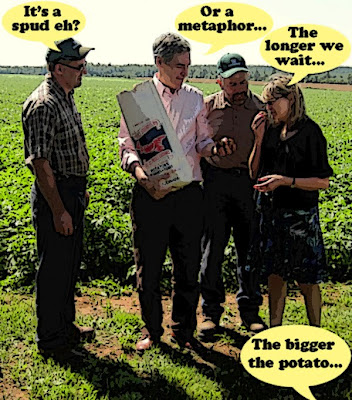 I knew something wasn't quite right, when the Liberals declared this absurd tour an enormous success. Instead of a lost summer.

So while yesterday I got all excited about Ignatieff's decision to go for an election.

Today I'm wondering whether he's fallen into a Con trap. 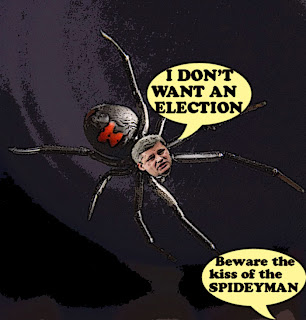 Because Ignatieff may or may not want an election. But Stephen Harper sure does.

Some Liberals suspect Harper will provoke his own defeat by introducing a ways and means motion - implementing aspects of last January's budget, including the popular home renovation tax credit - as soon as Parliament resumes on Sept. 14.

And it should have been OBVIOUS. For all the following reasons:

(1) The Cons have spent the entire summer spraying the country with billions. They'll never get that chance again so why not go now when polls show them with some momentum? Unlike the Liberals.

(2) The economy is showing some faint signs of recovery. In a couple of months hundreds of thousands of unemployed workers will start falling off UI on to welfare rolls. And the state of the real economy will be revealed. So why would you go later when you could go now?

(3) According to the last EKOS poll forty one percent of Liberals believe the country is heading in the right direction. And one out of three of them would vote for the Cons as a second choice. So if Harper uses the economic argument now, who knows how many of them he could attract.

(4) Polls also show that Canadians are starting to get tired of Harper. So why not go now in the summer glow, rather than later after a brutal winter. When more people might hate the very sight of him. Like I already do.

And then of course there is that reno business.

The idea of the opposition trio voting down a government that’s trying to give homeowners a tax break after they’ve spent tens of millions on household improvements would give the Conservatives a major election-launch advantage.

Which the Liberal braintrust seems to have forgotten. Or Ignatieff ignored.

And let's not forget that now the Cons don't have to squeal and pretend they don't want an election. Or invent an excuse to bring down their own government.

Oh boy. You know the Liberals can make fun of the NDP by calling them chickens....

But unless they are really smart and can do a better job of framing the debate. And explaining why we need an election right now.

When the Spideyman is holding a card in each of his eight legs.

I wouldn't be surprised if they find themselves BEGGING for the NDP or the Bloc to save them.

Or doing their own chicken dance...

Remember people if the Liberals and the NDP are going to form a government.

Both need each other.

And they are going to have to learn to dance TOGETHER...
Posted by Simon at 12:05 AM

Very well done. The LPCers are playing a game of chicken. They are hoping the NDP will support Harper so they can get out of the trap laid out by Harper which they walked into.

It will be interesting to watch. Harper would prefer to go now for all the reason you suggest.

I expect that the LPC have stepped into another well laid out trap.

Harper has been making lots of announcements on the billions for projects that were announced in the budget and for the rollout of the budgeted 2% of GDP stimulus funds.

The Liberals voted for all of this.

This is not new money - it is telling the taxpayers how their money is being spent.

You don't want to know?

hi West End Bob...thank you. :)
I'm just so tired at the sight of progressives attacking each other. And I found that chicken ad so ridiculous when the Liberals have now trapped themselves into a position, and many of them are secretly hoping the other opposition parties will save them. I wish Ignatieff well but you really have to wonder about the advice he is getting. Because the last thing we need is a fumbled election and a Harper majority...

hi Ricky...I can only hope that the sight of John Baird squealing about how we don't need an election, didn't force Iggy's hand.
Because it should have been obvious he did squealeth too much.
I have to admit I'm torn. I can't wait for a chance to dethrone the tyrant.
But choosing the right time and the right framing for an election is vital if we're going to win it...as we MUST...

Hi Marie...what I object to is the sight of Conservative ministers and MP's posing for photos with giant cheques, hosing their own ridings with money, and trying to score cheap political points with billions and billions of OUR tax dollars.
And yes I do want to know where all that money is going. But I fear we'll need a public inquiry to determine that. After the Cons are defeated... :)