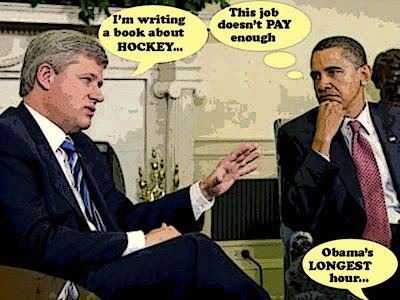 As I watched Obama sitting there listening to Stephen Harper, I don't think I've ever seen him look so old and so beat.

What with the redneck tea baggers running around demanding he be overthrown, and his healthcare plan going nowhere, and the generals in Afghanistan screaming for more troops, can you imagine what an hour with Stephen Harper must have been like?

I wouldn't be surprised if the Secret Service had to arrest him...to stop him from killing himself.

And what a farce it was.

Prime Minister Harper wanted to bask in the Obama afterglow, just in case he needed extra leadership gloss for an election that now seems less likely....But Canadians depending on untangling trade at the border were left watching an exercise in political relations staged only for style, not substance.

And what a snub.

... I don't know if it was deliberate or accidental, but it surely was not a symbolic gesture of friendship and it was really, in my mind, demeaning.

The Cons can say what they like. But that was THE shot they were counting on for their campaign propaganda. The shot of Obama welcoming his old buddy Stevie to the Big House.

And they got nothing, rien,nada, SQUAT. Awwwwww.

And that wasn't the only bad news.

Now if he wants to trigger an election he'll have to use a poison pill...and could end up poisoning himself.

And what with reality starting to set in.

And the grey months of winter ahead.

I wouldn't be surprised if the next time Great Ridiculous Leader returns from Moscow.

He'll look even worse than he looked today... 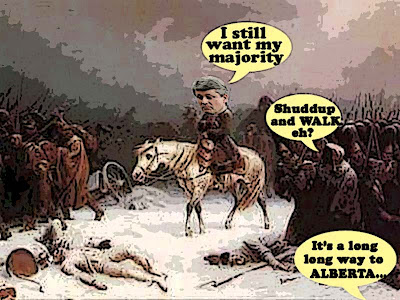 P.S. I just got some exclusive video of Stephen Harper arriving for his photo-op.....

He may look ridiculous today. But when we've finished with him and his Con quacks.

yeah right, Peevey Stevie. Like Obama's ever gonna' do you the slightest favour after you did this. File under: Chickens. Home. Roosting.

It amazes me to think that Obama has any time to deal with Harper. But, of course, being the so-called leader of the biggest trading partner, he's got to show some courtesy.

Maybe Harper should learn basic courtesy, come to that.

Obama has much more important things on his mind right now and he would greatly crave intellectual company like Ignatieff.

Harper is so stunningly awkward, it's hard to believe that he's lasted this long. It's time to see him out the back door and on to a firewalled Alberta.

I think it's delicious that the photo opportunity of Obama greeting Harper at the car was killed off. Obama's people know of an impending election and have probably denied Harper some valuable cachet and video footage.
Sort of like being sent up to one's room without dinner.

Harper claims to be the smartest guy in the room. But outside of the office, others eclipse him. Obama did just that yesterday.