Canada and My Bad Blogging Day 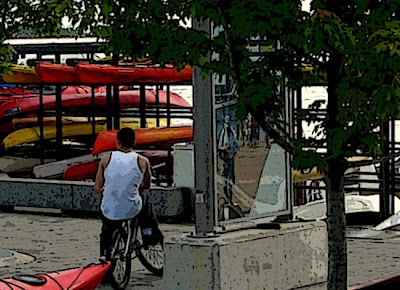 Oh boy. Sometimes it isn't easy being a Canadian eh? It still looks like the summer that arrived about three weeks ago. But if you go out without a hoody you can freeze your little tits off.

And then there's the state of the progressive blogosphere...

The Liberals have suddenly stopped crowing about an election, or calling the NDP fascist collaborators for propping up the Con government. It's like the Big Chill. For ....um....obvious reasons.

While the NDPers having recovered from the shock of finding themselves in bed with The Creeper..... for .... um..... obvious reasons. Are now desperately trying to regain the high moral ground by claiming that Michael Ignatieff is the same or worse than Stephen Harper.

Unfortunately, Harper’s challenger, Liberal Party leader Michael Ignatieff, is just as much a wolf, but poses a much greater danger to the Left because he dresses as our shepherd.

Which is ridiculous. Because we're not sheep. Ignatieff may be badly flawed, but he's still better than Harper. And nothing could be worse than a Harper majority.

But then maybe you have to be gay to understand that.

Just like I now realize you probably have to be gay to understand that this woman is no hero.

And that it's not even funny.

Oh well. WTF? Even the best can have a bad blogging day.

And there was some good news today. They arrested another hero for allegedly gay bashing this guy. 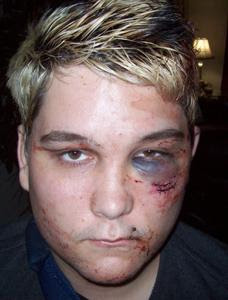 The bad news? You can arrest one gay basher, but there's a lot more where that one came from.

And even if they do convict that guy in London, he'll probably get off with a slap on the wrist. Because he's a hero eh?

Golly. I can hardly wait to hear what Don Cherry has to say about that.

But of course it's my fault. I really have to pack away my dreams and face up to REALITY. For a change.

Progressives will never unite until Harper gets a majority. Summer is really over eh?

I dont understand why Ignatieff is seen as Harper ver 2.0, I think he is a great guy with the exact liberal vision for Canada that I have. His speeches are very inspiring and always on the nose. He also marches in Toronto's pride parade, which is absolutely the last thing Harper would ever do.

As for Don Cherry, he is a supporter of gay rights, so he is on our side. :D

It is really disturbing to hear that high schools are still a safe haven for homophobia, and that is why it makes me sick to see my province ban the discussion of homosexual topics without parental consent.

Simon I seriously did not intend, nor do I agree that I lionized a gay basher.

My post was based on the interpretation that a slight proportioned woman defended herself against a bunch of very large Coldstream Guards who she claims harassed her and her husband - a crowd of drunken British soldiers perhaps not being the first example one visualizes when thinking of the victims of a hate crime.

I would suggest the appeal of the story is in the image of a physically unprepossising target turning the tables on a pack of large bullies - did you read the part where she claims she fought back after being knocked down? Or the part where her 56 year old husband was swarmed by the pack of large young men one of whom bit his nose off?

Neither of us was there. If she's a bigoted homophobic bitch attacking defenseless gay soldiers because she was disgusted by their dance routine, then fine she deserved to be convicted. If instead events happened as she and her husband claim she's someone who stood up to bullying and defended herself against overwhelming odds.

You can assume the worst about people enjoying the story and why they do but I think you'd be wrong to do so.

Hi Jesse...I can understand your frustration.
The problem is that Ignatieff is more right wing than someone like Dion was.
He was a cheerleader for the war in Iraq, in some speeches he appears to be defending the use of torture, and to try to win votes in Alberta ...good luck...he is now a cheerleader for that ecological horror of the oil sands.
However, as you point out, he is a defender of gay rights and of the other human values that make us the country we are.
And a believer in a strong role for government in protecting and nurturing those precious values.
So in no way can he be compared to Harper, because Great Leader's horrifying vision of Canada is an absolute nightmare.The absolutely worse thing that could happen to this country. And of course to gay people like you and me.
As for Don Cherry...he's a supporter of gay right? Who knew eh? Are you sure about that? ;)
Finally the situation in Canadian high schools is an absolute scandal. If we allow bullying in schools,idolize it on our hockey rinks, and allow ruthless political bullies to govern our country, the poison will spread everywhere and our country won't stand a chance...

hi Cliff...I am not suggesting you are a homophobe, I'm just disappointed that you played the story the way you did. Without doing a little more research.
If you had done that you would have found out that the facts as raised in her trial were that while DRUNK she was moved to rise out of her chair, approach a group of men who were dancing too GAILY for her liking. Jabbed one of them in the chest, tussled with his wife and then sucker punched some guy. For which she was duly found guilty of ASSAULT.
Considering that she is a karate expert, has biceps almost as big as mine, and that I very much doubt that one of the soldiers would have hit her first because she's a woman, she's not my kind of hero. Just another homophobe from the Bible Belt of Abbottsford trying to impose her bigot views on others.
On the other hand....I'm not denying that a pack of drunken British soldiers can be an ugly sight. I've been dogged by them from Britain to Belize. Where I only visit bars with a sign on the door: British soldier NOT welcome. But fair is fair. And the conviction speaks for itself.
Beyond that though I am also offended by this country's increasingly vulgar definition of itself. As I told Jesse we seem indifferent to bullying from our high schools to our government. It permeates our culture.
We make heroes out of all the wrong people, worship violence on ice, putdown peacekeeping as not manly enough, knife Kyoto etc etc.
Instead of just saying fuck off we're the nation of medicare and peaceful values and a better world and that's more than good enough.
Oh well...aren't you sorry you got me going :)
In short: I forgive you completely brother. I don't for a moment question your motives. If I had just read that newspaper report I might have come to the same conclusion. But that report of course was part of the problem. And as the wise old Rabbi said, if I didn't point that out who WOULD?