Why the Cons Fear a Coalition So Much 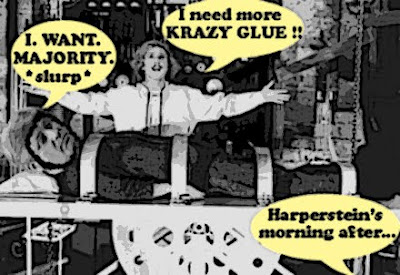 Well I see the sinister operatives in the PMO have managed to reattach Stephen Harper's mask. Sort of. After it suddenly fell off... and he started raving like a krazy man.

By declaring war on women, gays, and the Supreme Court, and promising to flood this country with guns...and turn it into a police state where religious fanatics write the laws.

Which is why I guess his spokesman/flunkey Dimitri Soudas has been frantically trying to change the subject.

"How about we focus on the economy first and then we can figure out the rest once the real issue is out of the way, once the recession is over then Canadians can judge the government on its performance."

But of course it's too late. Because the monster is out of the bag.

"There have always been two Harpers," said Ignatieff. "The real Harper always comes out when he thinks he can't be heard."

And after this it must be clear to everyone...except the backward Christianists and racist rednecks who make up his base...that these alien Cons must be defeated if Canada is to survive.

Which reminds me...I thought that Ignatieff did a good job of answering the question of whether he would form another Coalition.

He said he "already refused a coalition" last January because he didn't think it was "in the national interest," and he does not believe he has to "revisit" that question. He said he will be seeking a mandate for a moderate, progressive, competent Liberal government.

"But to have a minority government work in a situation such as that, I would respect my political opponents and I would try to work with them."

Which doesn't make up for his unfortunate decision to de-legitimize the Coalition in the first place, but is at least a step in the right direction. 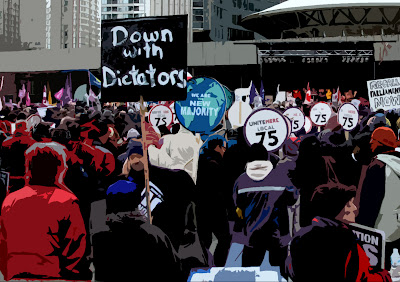 Because a Coalition or alliance of the progressive parties was, is, and will always be the ONLY sure way for a fragmented left to defeat the united Cons. And because it depends on compromise it is also the most CANADIAN solution to drive these brutish RepubliCons from power.

"He could have said 'no.' Instead, Ignatieff gave a circular, 51-word answer and refused to rule out a coalition," Kenney wrote in an email to The Canadian Press."Michael Ignatieff dodged the question because he will, in fact, form a coalition if he gets the opportunity."

Answer: because it's their worst NIGHTMARE.

They know the day progressives start cooperating with each other, these miserable Cons will be driven all the way to Amerika or Alberta. And they'll NEVER head a Canadian government again. Because they are not Canadian, they are not worthy, and there are way more of us than there are of them.

So you know.... be kind to your progressive brothers and sisters. Don't expect perfection. Argue vigorously but avoid stoopid partisanship. Just remember that this country and its precious values were built on compromise.And that sooner or later, like it or not, we will have to work together.

Remember who the real enemy is.... and what they would do to the country we love.

And that however flawed we are.

I whole-heartedly agree, Simon. You know what struck me in that leaked video? How comfortable in his skin ol' Peevey Stevie looked. Usually when we see him, he knows he is on camera and he looks a little stiff as he is measuring his every gesture and word for public consumption. Not here. He looked like a real passionate hell-raiser, firing up the believers from his pulpit. Iggy's right - that's the real Stephen Harper. And he looks like he wishes he could summon electric bolts out of his hands to slay his enemies, like the Emperor in Star Wars.

Ignasty is back to the same cant:

Now WHY can't he just learn to co-operate with other progressives, in order to stop the Harpokons?

Oh, that's right... because Ignasty is not a progressive...

hi 'berto...yup. You're right. I was wrong. I thought common sense would prevail.You know maybe Canada needs a Harper majority.There won't be much left of this country but maybe out of the rubble intelligence will finally emerge....

Believe me, Simon, I *wish* you were right, and I was wrong. Ah well, maybe you can sponsor me, as a refugee, for citizenship in the Nation of Québec, eh? (You'll have to tutor me in the lingo, though -- my Frenglish is pretty pathetic...)