Jake Raynard Gets His Rally 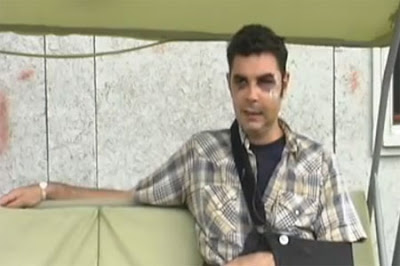 A week ago Jake Raynard was savagely beaten by a gang of gay bashers in Thunder Bay.

The attack left him with 15 fractures to his cheekbone, a broken eye socket, a broken jaw and a broken upper palate.

So a rally was organized in his honour.

Jake wondered whether anyone would turn out.

But boy did they ever...

Good for the people of Thunder Bay.

I'm still waiting for the police to arrest those responsible.

But at least the message has gone out; gay bashers are cowardly scum.

We are not afraid.

Trust the gay bashers to continue their work using stealth, surprise and ambush to do their dirty.

The REAL people of Thunder Bay come out publicly in great numbers in support of Jake Raynard and his difficulty and the roaches and other insects of T-Bay life resort to the darkness.

There is indeed darkness in their hearts, too. More's the pity.

Right on! That's the way it's done. Kudos to the good citizens of Thunder Bay, Ontario, and the local media for making this stand. The Facebook group is now nearing 7,000 members.

hi Torontonian...yes and EIGHT against ONE. Even by their cowardly standards that's pretty low.
However you'd think that with eight suspects the police would have arrested them by now.
But it's now been more than a week and I'm wondering WTF is going on?

Hi Scott...yes wasn't that great to see gay people and straight people and kids together standing up to the bullies?
And the local media has been great too.
I did say I hoped that something good would come out of this bad thing.
But now I really believe it... :)