Canada: Where Gay Teens are Terrorized 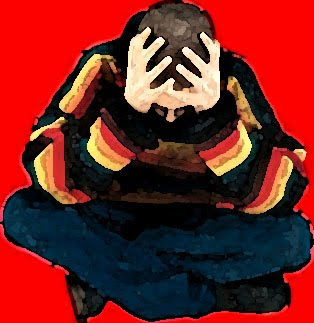 Canada 2009. And in our high schools the terror goes on and on.

High schools are "the land that time forgot" in the ongoing battle to eradicate homophobia, says an educator researching the harassment of gay and lesbian teens in Canada's school system.

Taylor says the findings of their first phase are not surprising: the vast majority of gay and lesbian students who responded to the survey reported verbal homophobic attacks in their high school — sometimes physical abuse — and could identify areas of their school where they don't feel safe, such as washrooms, gym change rooms and hallways.

Oh boy how depressing. Why don't people care. Why do I write about it? Is it a gay thing?

As well, "a lot of straight kids are bullied homophobically at school," she pointed out

But can you imagine an ad campaign in Canada like this one in Britain? 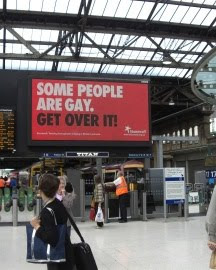 Aren't British kids lucky? They get a shiny ad campaign as a back to school present, while our kids get nothing but terror.

So why DO so few Canadians care about bullied children I wonder ?

What kind of people are we ?

And what does it say about Canada?
Posted by Simon at 1:23 AM

It is supposed to be better for gay teens today. With rights established in law people say there is nothing more to do.

I wonder if our own queer communities are that interested in what is happening in our schools and outside the gay ghettos? I know the larger community of humans isn't generally keen on addressing the effects of homophobia.

Youth gay or straight are often victimized, no, assaulted with words. They are physically assaulted, for not being a member of the "gang".

This is seen by many in our school systems and by parents as normal behavior, kids will grow out of it.

In the interim, the boys and girls that live through each assault lose a little more of themselves every time.

Here in Montreal, there is an organization for homosexual teens & young adults called Project 10; I'm sure you've heard about it. A friend of mine's daughter went to their centre regularly while in high school & she had nothing but good things to say about it. Worth recommending. I'm sure they must address the issue of bullying.

You're right though, more people & community groups & the schools themselves should do more to address the problem of bullying not just for homosexual kids but for all kids who are bullied simply because they don't fit in any given clique.

More of us should be blogging about this, after all it is one of the best ways to express our views.

hi Ricky...I don't think most people gay or straight care enough about what's going on in our schools. As Bruce said on your blog, they'd rather forget that chapter. But school is where tolerance is taught and learned and it's our best hope for a better future for everyone. Especially in a country as diverse as Canada.
If you can teach them why bullying and violence are bad when they are children, you won't have to jail so many people later.
And we'll all live in a better world...

hi C.K....yes I have heard of it and it's very encouraging since a lot of troubled gay teens have no place to go.
And yes ALL bullying is bad.I consider it a state of mind that people should learn to avoid, because it's a seed from which many bad things leap.
The outsider, the ones who don't belong, the alien threat, the ones who must be beaten or killed...
Ideally parents should teach those values to their children, and I know some who definitely do.
But just in case they don't our schools should make sure they do.
And we can all help by spreading that message...