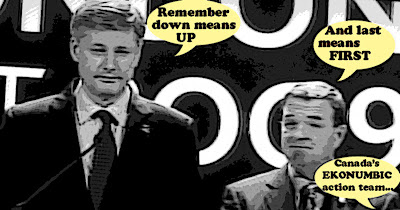 Oh dear. I don't think the Cons are going to like this forecast.

All G7 economies save those of Canada, Britain and Italy will expand in the third quarter, the Paris-based OECD said Thursday. Canada's gross domestic product will contract at an annual rate of 2 per cent in the period, the weakest of the three laggards and advance at a rate of 0.4 per cent in the final three months of the year, the OECD said.

So much for Great Economist Leader...

The latest addition to the bevy of economic forecasts competing for the public's attention promises to be amplified by Stephen Harper's political opponents because it calls into question the prime minister's assertion earlier this year that Canada would be among the first countries to escape the most dramatic global downturn since the Second World War.

You know I think we can work with this. In fact I think this is so HUGE...and so easy to understand.... it could cost them the election.

Quick. Somebody please send a reno guy to Con headquarters. Where the ceiling is now the floor.

And an ambulance...to pick up their credibility.

Talking about renos. It seems the renovations bill and the tax credit that goes with it haven't been passed by the parliament.

This is Harper's trump card come the autumn session. Would the Liberals dare vote against it particularly since so many Canadians are so "invested" in renos in their homes.

So, Harper wants to prolong the misery.

Maybe he needs more than a carpenter to build a real party platform.

As it stands, what he's standing on is pretty rickety and we don't have the means to get him out of office sooner rather than later.

You want a campaign issue? Undermining national and NATO security should do. Did you read le Devoir today? The docs Bernier left unattended for weeks in April, 2008 amounted to 560 pages, and detailed just about every aspect of Canadian foreign policy imaginable. I actually have called upon the PM to resign over it. No one can trust Canada with their national security until the leak is dealt with properly.