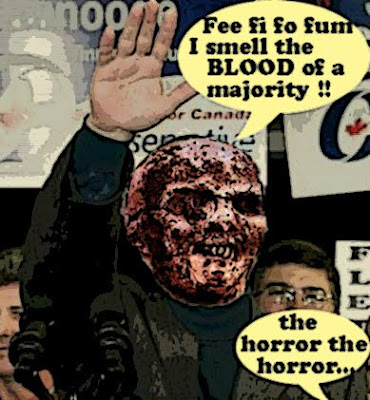 Golly. I can't believe it. My dream finally came true. Stephen Harper tried so hard to pretend he is Mr NiceThug. But tonight his mask fell off.

Prime Minister Stephen Harper is calling for a majority Conservative government to "teach" his political opponents and "their little coalition" a lesson, according to a video leaked to the Opposition Liberals.

And what an ugly and evil vision of Canada he would force upon us.

A Canada where women and gay rights would be gutted, the Supreme Court would be full of right-wing extremists with cowboy hats, guns would be everywhere, and the Christianist fanatics in the PMO would write our laws and tell us what we can or cannot do.

A Canada where Canadians are encouraged to hate each other. Where opponents are treated like enemies that should be DESTROYED.

If we do not get a majority, the Liberals, the NDP and the Bloc Quebecois will combine and they will form a government. They will deny this till they’re blue in the face in an election campaign but I guarantee you if we do not win a majority, this country will have a Liberal government propped up by the socialists and the separatists.

Where the word coalition is a bad word, instead of a mark of civilization and compromise. The values this country was built on...and keep it together.

The good news? We knew that Harper hates Canada...and wants to turn it into a jungle. Now EVERYBODY does. Or soon will.

You know I was feeling a little gloomy about a fall election. But now I'm feeling a lot better. Because we can use this tape to expose the horror of Stephen Harper. Oh boy can we ever.

My dream came true.The mask fell off. But my message remains the same.

Defeat these sinister alien Cons. Because we deserve BETTER.

And so does our country....

Labels: Con Canada, Stephen Harper, The Man Behind the Mask

I always knew those thing about Harper. That & alot more which is why I would vote for Iggy inspite of not knowing much about him; he would be the lesser of the 2 evils.

However, when you read the letter to the editors & comments left at various newspages, sadly enough, more & more Canadians support Harper's brand of intolerance, conservatism, & the Christian right. Case & point? The recent victory of Marc Lemire backed by CCF; in shot, section 13 of the Canadian Human Rights Commission was abolished. Boy was this a celebration!! No matter which comment page I was on, I thought I hit KKK territory of the U.S. They are celebatory because without section 13, the concept of hate speech no longer exists. Just an example.

Plus, I remember lots of Canadians literally crying because they didn't like the proposed coalition gov't. They're not going to forget.

All this to say, I can only hope this election doesn't get called right away, because a Harper majority frightens me most.

I'm starting to think the only thing I can do is move overseas.

right on Simon. I believe this was a well planned leak - free front page, talk show, TV, social media, blogs and so on - no majority for any.

yucky and hard to watch, eh? You gotta read impolitical's comment on this. She nails it. http://impolitical.blogspot.com/2009/09/can-we-do-better-than-stephen-harper.html

Under 2 successive minority governments, Lester Pearson gave Canada Universal Health Care, Social Security, The Maple Leaf and The Auto Pact. All those nasty socialist programs that are the backbone of the Canadian identity.

Although the possibility is there, I do not think that this is a leak. He is preaching to the converted and this will not bring him more votes from his flock. On the other hand, this will play into the fear of those Canadians (about 62% in 2 successive elections) about giving him a majority, people who might otherwise have voted for him because they do not like Iggy or Layton.

Libs and NDPers should note that your vicious fighting of each other can potentially lead to Harper getting his majority -- are you willing to live through 4 years of this? He wants to teach opposition parties a lesson for basically exercising their democratic rights to bring down a minority government (whether politically opportune or not). Go figure what he would do if he had a majority.

re: the need for the Liberals and NDP to co-operate, there was a follow-up story to this "leak" story. It came out earlier today:

Ignasty was asked about the *substance* of Harper's charge that: "If we do not get a majority, the Liberals, the NDP and the Bloc Quebecois will combine and they will form a government. They will deny this till they’re blue in the face in an election campaign but I guarantee you if we do not win a majority, this country will have a Liberal government propped up by the socialists and the separatists."

Quote: Ignatieff ducked questions about the substance of Harper's accusation.

When asked about forming a coalition, Ignatieff simply noted that he killed the one the opposition parties had formed last year.

When asked again whether he was amenable to an informal governing arrangement with the other parties, Ignatieff sidestepped the question.

When asked whether he would agree with Harper to kill off public subsidies for political parties - the issue that triggered the coalition in the first place - he offered no commitment.

Ignatieff simply noted that he killed the one the opposition parties had formed last year -- That's all the reply that's needed for anyone asking about the Liberals and NDP working together, and wondering why the NDP can't "co-operate in order to defeat those wicked, wicked Harpokons"... The Liberals are already IN a coalition -- with Stephen Harper. It's just that -- finally -- it's starting to fall apart.

BTW, you say: Lester Pearson gave Canada Universal Health Care, Social Security, The Maple Leaf and The Auto Pact. All those nasty socialist programs that are the backbone of the Canadian identity. -- I *assume* you are aware that universal health care and old age security were NDP policies, eh? (Credit goes to Tommy Douglas and Stanley Knowles, respectively.)

So yes, Liberals and NDP *can* work together. It's just that Ignasty does not show ANY signs of wanting to do so.

hi CK...yes I'm afraid the Harper years are turning Canada into a meaner more selfish country.
The scary thing is that if Harper enjoyed the same level of support in Quebec as he does in the rest of the country he would probably have a majority.
The HRC fuss is a good example. I can't even read some of the stuff that's written about it by these rabid town hall types it just makes me want to vomit.
The good news is I know Quebec will never go that way so if Harper ever gets a majority that's where I'm seeking exile.
I'll sponsor you if you want... :)

Hi Jan...I'm not sure it's a sponsored leak. Because the downside is that it reminds people of who that ReformCon really is.
Although I'm sure it will bring the sheep in his base back in line.
Which is not to say that the Cons haven't focus tested this one and have found that there is some advantage to be had.
As I've said so many times before, the one thing that must never happen is a Harper majority...

Hi Scott...yes I read it and it's very good as usual.
I'm afraid though that I am not optimistic. The disarray on the left is palpable and the chickens are coming home to roost, and Canada as we know it could be coming to an end before most people even realize what's happening....

hi anonymous 12:07...very good point. A minority government can work if the government makes an effort to work with the other parties. But all Stephen Harper has ever sought is to destroy his enemies, and now we're all paying for it...

hi anonymous 2:36...I agree with every word you wrote. I know ther is at least one other person who agrees with us so that makes THREE of us !!!! :)
But seriously though I find the in-fighting on the left inexcusable when we are facing the threat of a Harper majority.
Sometimes you really do have to put your country before your party.
But in the partisan blogosphere that's not what people want to hear... :)

hi 'berto...I did tell you I love you? Right? Good so then I can tell you what I really think. :)
I think you're being to hard on the two anonymous commenters.
I think they are speaking in general rather than specifics.
In a newer post than this one I lament that Iggy was so adamant in dismissing the idea of a coalition, because they are good and necessary things in advanced democracies.
And because he only played into Harper's hands.
But he seems to be softening his stand just a bit so every teeny step counts.
And it is worth reminding people that when the Liberals and the NDP have worked together in the past they have produced the best government this country has ever had.
In fact, in a recent poll Canadians said they would love the Liberals and the NDP to work together.
So like the guy looking for the pony in that pile of manure I remain optimistic that sooner or later cooperation and compromise will prevail... :)