Why Harper's Cons Must be Defeated 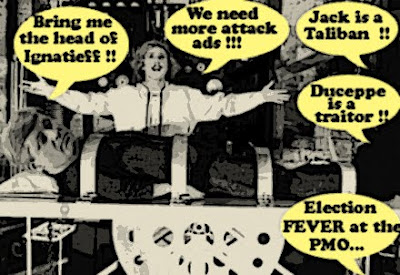 If anyone asks you why we need to get rid of Stephen Harper and his ugly Cons you can tell them to read Lawrence Martin.

Mr. Harper's government is also the one that promised to breathe new democracy into the country but did the opposite, overcentralizing command in the Prime Minister's Office to a degree seldom seen. His Conservatives took attack advertising to new lows, even doing the cluster bombing between campaigns

Or Boris at the Galloping Beaver.

Because when you started appointing bigots, racists, and religious fanatics to key positions, when you brow-beat the GG, you went beyond politics....You reduced it to the absolute bedrock of what it means to live in a democratic and free society.

Or you could tell them to get it from the horse's ass and read Stephen Taylor.

Because it's all there.The PMO talking points.The excuse to launch another round of attack ads against Ignatieff:

As if these sleazy Cons needed an excuse. When they were the ones who brought these cowardly, bullying attack ads to Canada like political syphilis. Straight out of the diseased mind of Karl Rove. And turned our Parliament into a House of Beastiality. And the home of the Big Lie.

And then there's this line which sums up what's wrong with these Bush/Cheney Cons:

Conservatives will then ask Canadians to consider two options: a majority Conservative government versus a coalition of socialists, separatists and Ignatieffs.

Their deranged tendency to brand their opponents as enemies who must be DESTROYED. Even though those parties represent SEVENTY per cent of Canadians.

And who are these "Ignatieffs" I wonder ? Answer....as written in The Gospel of Stephen Harper...The OTHERS. Les autres as we say in French. The free women, the gays, the stranded brown people, the city dwellers, the Quebecers and all the other Canadians who don't share Harper's desire to turn this country into an authoritarian, bigoted, theocratic jungle.

And are therefore not considered "real" Canadians by these Con thugs. When in fact those rabidly ideological RepubliCons are the real aliens who don't belong in this country.

As you know I'm not the biggest fan of Michael Ignatieff. But if those "Ignatieffs" are the others....les autres...the ones Stephen Harper doesn't consider "real" Canadians...then I'm an Ignatieff too.

Because whether we are Liberals, or NDPers, or Greens, or Bloquistes, we are so much better and more Canadian than these morally corrupt Cons. And what the next election will really be about is saving the soul of Canada.

Defeat them, crush them, finish them off. Send them back to Amerika...or Alberta.

Before they DESTROY our country.

Before they corrupt us further...
Posted by Simon at 2:52 AM

You tell 'em Simon. I even think the recently exposed details of the Bernier scandal trump everything else. Harper is playing footsie with national security - plus all our NATO partners. I actually called on Peevey Stevie to resign yesterday, I was so upset. If the story had been broken by an english media outlet (as opposed to le Devoir), I swear that's all we'd be fretting over today.

hi Scott...yes I read your excellent post. But I'm not surprised by the lack of reaction. I think a lot of people in this country are numbed to the moral corruption of this goverment...or have themselves been corrupted.
I see no other reason why Harper remains relatively popular after his government's shabby record, and it's disgraceful un-Canadian behaviour.
People really have to give their heads a shake and think about the kind of country they want.
Because Harper's Canada sure isn't mine...