Sarah Palin and the Revenge of Levi Johnston 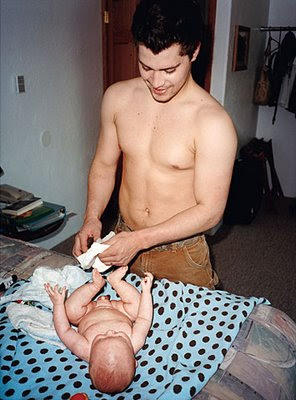 I must admit I have always had a soft spot for Levi Johnston. He seemed to be the most human of the Palin Bunch.

And who knew a baby redneck could be such a good daddy?

For exposing Sarah Palin as a greedy loser.

Sarah was sad for a while. She walked around the house pouting. I had assumed she was going to go back to her job as governor, but a week or two after she got back she started talking about how nice it would be to quit and write a book or do a show and make “triple the money.” It was, to her, “not as hard.” She would blatantly say, “I want to just take this money and quit being governor.”

After Tripp was born, Sarah would pay more attention to our son than she would to her own baby, Trig. Sarah has a weird sense of humor. When she came home from work, Bristol and I would be holding Trig and Tripp. Sarah would call Trig--who was born with Down syndrome--"my little Down's baby." But I couldn't believe it when she would come over and sometimes say, playing around, "No, I don't want the retarded baby--I want the other one," and pick up Tripp. That was just her--even her kids were used to it.

And talk about the revenge of the redneck. She forced Levi to cut his mullet for this absurd photo-op. 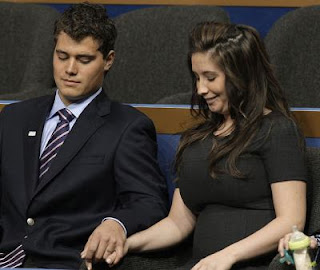 And now he's cutting her down to size. Taking off his suit.

And planning to strip for Playgirl.

Hmmm...... you know I still can't quite believe that if the Republicans had won, and Poppy McCain had keeled over, this gang could have been running wild in the White House

Golly. Poor Levi may be standing there in his underpants. Sarah Palin may be totally exposed.

Levi Johnston is a grim and ominous reminder of all that might have been....

Can you even imagine?

"The America that I know and love is not one in which my parents or my baby with Down Syndrome will have to stand in front of Obama's "death panel" so his bureaucrats can decide, based on subjective judgment, of their "level of productivity in society", whether they are worthy of health care. Such a system is downright evil."

It's amazing. That an imbecile like this failed ex-governor can mention something as idiotic as "Death Panels" and in the next instance it is a serious part of the national dialogue. Why are the American people so susceptible to such blatant propaganda? I have a theory if you're interested in hearing it:

I don't know about you, but I'm loving the Sarah Palin/Levi Johnson saga/soap opera. And to think that only one year ago, the geniuses on the Republican National Committee deemed her to be the best choice to be "a seventy-two-year-old heartbeat away from the presidency".

Are you surprised that the "party of Lincoln" is imploding? Are you stunned that America has become the laughingstock of the industrialized world? You shouldn't be. You really shouldn't.

Hi Tom...I think you're right. I think we are turning into a society of idiots.The barrage of trivial information, the tabloid obsession, the shortened attention spans, the failure to distinguish between the interesting and the important, is leading us to catastrophe.
The same thing is happening here, but in your country it's even more advanced, and I fear that the right-wing will use this to advance their fascist ends.
I like a lot of Americans a lot so I'm keeping my fingers crossed...