The Charge of the Iggy Brigade 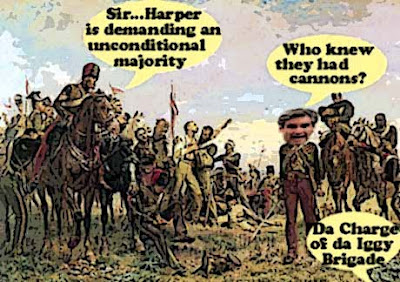 Damn. I can't believe somebody beat me to this one.

Theirs not to make reply,

Theirs not to reason why,

Theirs but to do and die...

But I guess it was OBVIOUS. And I only hope it can restrain the Iggy Brigade from charging madly up the hill into the mouths of those Con Cannons...and end up giving Stephen Harper a majority he can use to destroy this country.

Because let's not kid ourselves that's what could happen if we go now. Ignatieff's decision to oppose every Con bill no matter what's in it ....instead of picking his spot.... is bad politics and needlessly reckless.

The polls are horrible.

Stephen Harper is viewed as twice as trustworthy as Michael Ignatieff (31 to 14) and a third more competent (36 to 20) and more future-Canada-visionary (32 to 20), which gives him a final Nanodex score of 99 to just 54 for Ignatieff, and 40 for Jack Layton.

just 35% of Liberal voters picked Ignatieff as “most trustworthy,” with 15% choosing Harper and 13% who like the cut of that Layton jib. Compare that to the 71% of Conservatives, 64% of Bloc supporters and 45% of New Democrats who back their respective party leaders on the trust question.

And Stephen Harper is holding all the cards right now, hosing the country with our tax dollars. And just waiting to trigger an election and blame the other parties ......so he can make the argument he NEEDS a majority.

Their secret agenda, then, is electoral not ideological. The key to winning any fall election is to pretend they don't want it.

Exactly. Which is why I think the Liberals should just cool their jets. Thank the Bloc for giving them a bit more time to prepare and sell their message.

Concentrate on firing their cannons at targets like this one.

As detailed yesterday, Gerard Kennedy, the party's infrastructure critic, has unearthed statistics that suggest the bulk of the stimulus money is - sharp intake of breath - finding its way to Conservative ridings.

Softening up the Cons....instead of madly attacking the NDP

When we face a common threat, share common values, and Canada is in mortal danger .

You know nobody but NOBODY wants Stephen Harper gone as much as I do. And if Ignatieff manages to save Canada...instead of torching it on the bonfire of his vanity...I'll be really really happy.

But the road to hell is paved with good intentions. There are many ways to lose a country eh?

I have to admit I don't like Iggy's tactics as of late myself, including that one of accusing Harper of getting propped by 'socialists' in reference to the possiblity of Layton supporting the EI bill. Paul Dewar explained that one best: something along the lines that it's something that would be good for Canadians so why force an election? He's probably the only one making sense as of late.

As to that home reno tax credit; Duceppe said at the beginning of the month he would go along with this.

I would love to see Harper gone myself, but I don't want an election right now as I think Harper could get his majority inspite of his video.

Goes to show, so far Iggy`s strategy is not going well at all. Starting with those ads with themes of think big & global; or going to China & India. Personally, I don`t see that working at all for ordinary Canadians; some have lost their jobs due to their former employers choosing to sub-contract out their jobs to China & India. I can see that being sore point more than anything else.

My opinion, one good strategy (my last night's posting)would be for the Libs, NDP & Bloc to hammer Harpercons over the head with his views on health care. Our single-payer system is what bonds all Canadians from the extreme left to yes to even some of the extreme right leaning Canadians together; we all like & don't want to have 2 tiered health care like U.S. Why did Ol' Stevie change his tune back when campaigning in 2005? Because I'm sure health care would be a deal breaker.

hi CK...I completely agree with you. Something has gone terribly wrong with his campaign and he better fix it before he forces an election or we could be facing a real disaster...like a harper majority.
This internationalist talk is all very good...for Harvard.But he has to better connect with Canadians. And that means coming down to earth. For example if he was going to get some traction out of the E.I. story he should be introducing us to ordinary Canadians who have lost their jobs so we can understand their pain.
The health issue, as you suggest is also a good one. But again he could have made much more of it but he didn't.Even though it's an issue that Harper is vulnerable on.
But I'm afraid the Liberals are so excited about being able to fight an election again they're not thinking enough about whether they can win it. So my advice is wait a while before striking or risk losing EVERYTHING....

hi Jan... thanks. I'm really discouraged by all the infighting and I want to try to hold off an election until the NDP can raise a bit more money and the Liberals can decide on a proper campaign message because as I told CK I fear we're heading for disaster...