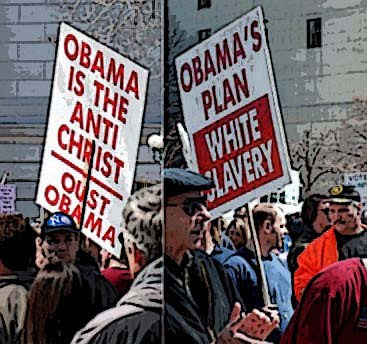 Ever wonder what might happen if you wandered into a rally of those angry and ignorant white people known as Tea Baggers.... waving a "PUBLIC OPTION NOW " banner?

Well Edward Kimmel did just that a rally in Washington.

And the police had to rescue him....

You know these Angry White People are not just ignorant and crazy, these people are fascists and dangerous..

And we're sitting on a time bomb.

Because if this baby blows, we're gonna FEEL it.

But then I guess we shouldn't be surprised eh? How did we think that the Amerikan Empire would collapse?

P.S. Not only are these rednecks crazy and dangerous...they're so damn ignorant they can't tell one picture from another.
Posted by Simon at 8:27 PM

Notice how they're all white, fat & not smiling? Some have scooters probably paid for by Medicare.

I saw a few of those stupid signs. Such stupid messages. Two notable ones for me, which are posted to my blog: http://sistersagesmusings.blogspot.com/2009/09/neo-con-mantra-and-new-anthem.html if you want to see them: one with some bimbo with a hand written sign over her head saying "Where's my Gun?" & the other one, which is definitely a keeper of this woman with arms in spread-eagle holding billboards with hate propoganda, & practically draped in the flag.
If we got all the tea-bagger pics together, we should play a game: Let's count the spelling mistakes on their signs.

These guys do scare the bebees out of me. They have not listened to the issues. As some crazy guy said on Anderson Cooper last night, its not about health care anymore.

Its all about highly placed conservatives building sham public campaigns that have managed to get these looneys out on the street.

Gosh, you guys are a tough crowd.

I'm ... overweight? As shit, I'm fat. I make a bunch of spelling errors as well (diagnosed dyslexic 51 years ago.)

The folks I waded into last week didn't fail to hurt me because of the police --- those guys didn't get there until about 25 minutes in to a 30 minute walk. They didn't hurt me because
a) they are patriots, just like we are. They give a damn about America and got up off their kiesters to go march to make America better; and
b) they knew, like I knew, that any blow they landed on me would hurt them a thousand times more than it would hurt me. Authority: M. Gandhi, Bombay, 1947.

We HAVE to win this thing. We pay plenty of money for health care; we just don't get the results we pay for.

Help me out by going to www.my.barackobama.com . Sign up. enter your zip code and prepare to be directed to rallies; volunteer opportunities; ways to HELP.