Alan Turing: A Gay Genius Gets an Apology 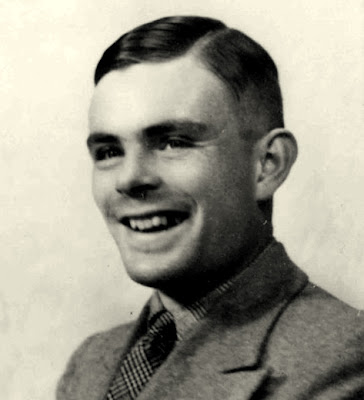 He has been called the father of modern computer science. He broke the Nazi's Enigma code. Winston Churchill said it was the greatest single contribution to the Allied war effort.

But a few years later his own government gave him a choice: be chemically castrated or go to prison. Just because he was gay.

So he committed suicide by biting on an apple laced with cyanide.

His name was Alan Turing and today, fifty-five years after his miserable lonely death, he finally got his apology.

British Prime Minister Gordon Brown apologized Friday for the "inhumane" treatment of Second World War code-breaker Alan Turing, who was convicted of gross indecency for being homosexual at a time when it was illegal in Britain.

"The debt of gratitude he is owed makes it all the more horrifying, therefore, that he was treated so inhumanely .… We're sorry, you deserved so much better..."

Oh boy. Did he ever. Because the way they treated that gentle gay genius was absolutely shameful.

The London-born mathematician was convicted of 'gross indecency with a male' in March 1952. Instead of prison, he was sentenced to chemical castration - injections of the female hormone oestrogen, designed to suppress his homosexuality.

The injections destroyed Turing's athletic frame (he would have run the marathon for Britain at the 1948 London Olympics if it hadn't been for an injury) and turned him into a bloated monster. 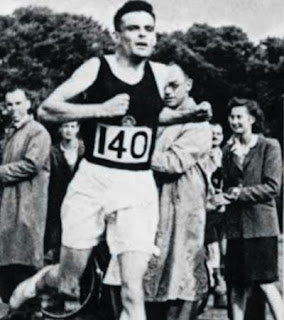 In the words of one of his biographers, it also set the diffident genius on a 'slow, sad descent into grief and madness'.

First they took away the job he loved so much. Then they stripped him of his dignity and called him a criminal. Then they ruined his body so he could never run or love again.Then they broke his brilliant mind.

Just because he was gay. And even though he helped save them from the Nazis. Can you believe that?

And what about all the other gay people.... in Britain or Canada...who had their careers ruined and their lives destroyed by homophobia? Who will apologize for what was done to them?

Right. Who will apologize for what they're STILL doing to us?

Oh well. There is one neat thing about today's apology. It was prompted by an internet petition.

You know.... on the machine Alan Turing helped dream up.

I think he'd enjoy that one. Rest in peace gentle gay genius.

They could NEVER apologize enough....

What a heartbreaking story, Simon. But I think you're right... Alan Turing would have loved the idea that an apology finally came because of his own genius.

The apology came more than a half century too late to be meaningful.

I saw his niece on BBC News and she was not exactly elated by the apology. I got the idea she was rather angry that it took so long.

How many other lives are there like Turing's? I can think of the pianist Noel Mewton-Wood who ended his life for exactly the same reason. There's a link about him right here:

It must have been terrible for them during those days and one wonders how the likes of Sir Alec Guinness and Nigel Hawthorne could get away with it.

Unless, there's a two-tier system at work in which the truly prominent ones are given a "free pass" and the others live a hell like nothing else.

I would demand an apology from that fella back in junior high who used to blow in my ear as we all waited lined up outside class waiting to be allowed in, except, I kinda liked it. A real trailblazer that one was, waaay back in '75.

Hi JJ...yes it is such a sad story.
And a tragedy on more than just a human level. Some of Turing's mathematical theories are just being understood now fifty-five years after his death.
So you can imagine how much more he might have contributed...

hi Torontonian...I agree it is far too late. It's a frightening thing to realize that some people seem to hate gays more than they hate the Nazis.
And one thing I didn't point out is the number of Canadian lives Turing helped save by making it harder for the U Boats to sink our convoys.
As for all the other gay people who contributed so much to the world, but had to live their lives in fear, it breaks my heart.
But it makes me even prouder of them.
They were so good and the others were so beastly....

hi Omar...hah hah hah...you're INCORRIGIBLE.
But I know what you mean.I blame the older boy who would look over my shoulder when I was reading his amazing comic collection.
It didn't really matter what the comic was about, but when I felt his breath on the back of my neck, I sure enjoyed reading them... ;)

I love your work on this blog...Keep up the good work. It is appreciated at Ariana Grande ft Social House - Boyfriend Official Lyrics Video