Glambo and the Gay Acting Soldiers 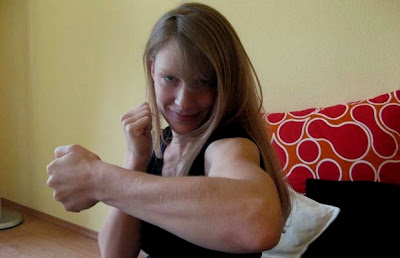 Something about this story disgusts me.

Not just the violent homophobia.

But the way this drunken bigot is being treated like a hero.

When Womanizer came on these guys went crazy. They were humping each other, grabbing their ties and whipping each other - pretending to be like Britney in the video for the song. Not just in Britain.

"It went well beyond a joke. They were being perverted.

Not just in Britain.

But now also in Canada.

I am please with Ms Wolfes' behavior. This is a typical Western attitude. We don't take gruff from anyone. I'm just surprised she only knocked out one person. I would have expected her to take out at least three. She should consider further training for future activities. I suspect she will be welcomed back to BC as a hero.

When she is nothing but a piece of shit white trash homophobe who should be locked in a cage.

I leave it up to you to figure out why the sight of men dancing closely together can drive a person to attack them. Because I've tried to think whether the sight of a straight couple dirty dancing could ever drive me to violence.

And I can't even IMAGINE it.

What I do know is that homophobia is a dangerous mental illness. And until these violent homophobes are cured or caged.

Of course, this plays well to the CanWest NatPo crowd. I only wonder how long it will take to get on the CFRB airwaves (if it already hasn't).

I wonder if she's ever heard of dancing the Gay Gordons and the other delights of Scottish country dancing.

Maybe she could learn a lesson in decency and courtesy if a kindly Scotsman would show her the proper steps.

On the other hand, she sounds like a pretty self-reliant cookie and can probably jump start any motorised vehicle and probably has a killer slapshot.

It's good to know that given the proper physical training, straight married white women can also be violently drunken homophobic a**hats willing to get into brawls while imposing their personal views on society around them, thus proving gender has nothing to do with attitudes.

Not quite the way I was hoping equality of the sexes would head, but sadly, to be expected.

hi Torontonian...well she's from Abbottsford B.C. that nest of Christianist fanatics and homophobes...so I'm sure she drives a pick-up truck. :)
But as was pointed out in court she was drunk, took it upon herself to go up to the dance floor and assault some guy who was minding his business, didn't bother to turn up in court, and is now wanted for assault. And we call that a Canadian hero? How low can we go?

Hi Niles...I believe in and admire strong women, but she is no role model.
And instead of bragging about her disgraceful homophobic behaviour, she should be ashamed of herself.
And quite frankly the way she has been acclaimed a some kind of hero in this country makes me ashamed to be Canadian...

hi Torontonian...yeah I saw the report and it also made her look like a hero. The debasement of this country is now so complete even the CBC is crawling in tghe gutter...

Well, she did use the word 'sissy' in an attempt to deride males of her own age for not conforming to traditional, patriarchal gender norms - which definitely makes her sexist and, possibly, transphobic.

Oh joy, another person with Teh Heterostoopid! Maybe all the 'roids she's on will nix her chances of polluting the gene pool any further. I'm told they do cause infertility...

hi transgrrrrrrlllllxxxx...I'm sure she is transphobic...judging people on whether they can fight is sooooooo ridiculous.

hi Bina...thanks for that video. These people really are the limit. And that one reminds me of Jason Kenney who once said gay people are free to marry....as long as they marry someone of the opposite sex...
Teh STOOPID indeed... :)