Donald Trump, the Enemy Rain, and the Scary Trumpy Bear 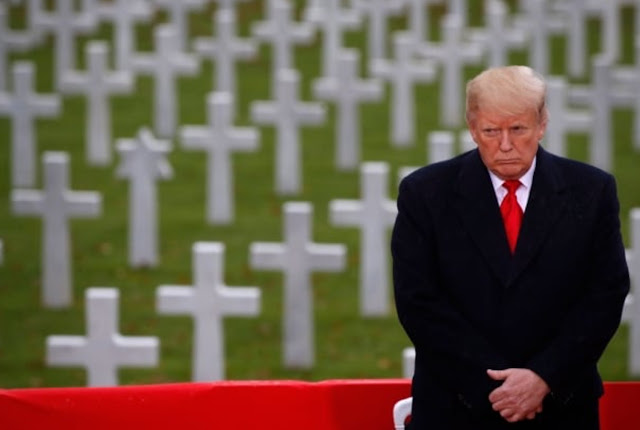 As I'm sure you know, Donald Trump's trip to France, to mark the 100th anniversary of World War I, was a diplomatic catastrophe.

And a PR disaster similar to the time he climbed the steps to Air Force One, with a long piece of toilet paper stuck to his shoe.

He was heavily criticized for using light rain as an excuse to skip a visit to a U.S. cemetery. 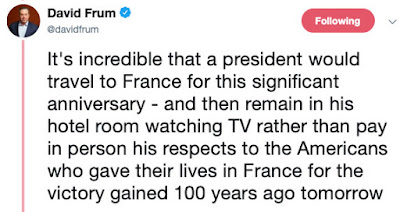 He was trolled by the French Army. 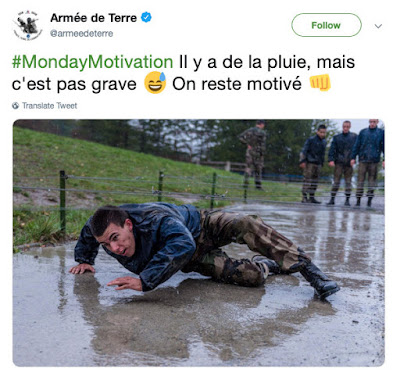 "There is rain, but it's not serious, we're staying motivated."

Justin Trudeau made him look bad by simply walking down the Champs-Élysées without an umbrella. 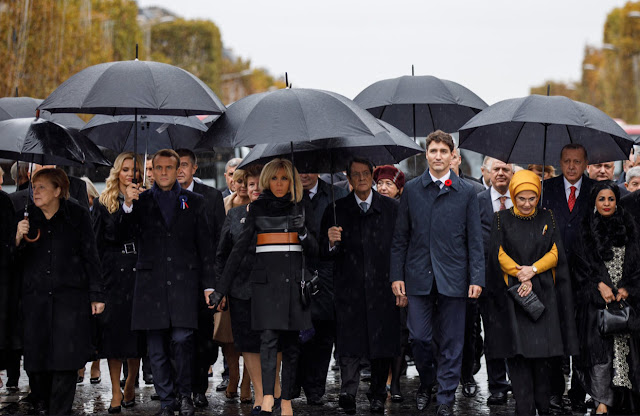 While Trump dodged the rain again by travelling to the Arc de Triomphe in a limousine.

And to make matters worse, a clip of Trudeau at a ceremony in Dieppe in 2017 also went viral, and no doubt embarrassed Trump further.

But let it not be said that Trump does not know the true meaning of sacrifice.

It was still raining Sunday afternoon when Trump went by motorcade to Suresnes. But this time Trump did not retreat. He heroically cast aside his umbrella and spoke — for 10 moist minutes.

He recalled the sacrifice of Americans in the Great War (“through rain, hail, snow, mud, poisonous gas, bullets and mortar, they held the line”). And he invoked his own sacrifice, telling a group under a tent: “You look so comfortable up there, under shelter as we’re getting drenched.”

And who could fail to be moved by this?

The lectern dripped. His overcoat glistened. And yet his hair, under protective lacquer, held firm — like the burning bush that was not consumed.

The valiant polymers that fell defending his hair from the rain seeped into the soil at Suresnes. Now it truly can be said, as the poem goes, that there’s some corner of a foreign field that is forever Trump.

And there was more good news for his faithful supporters. 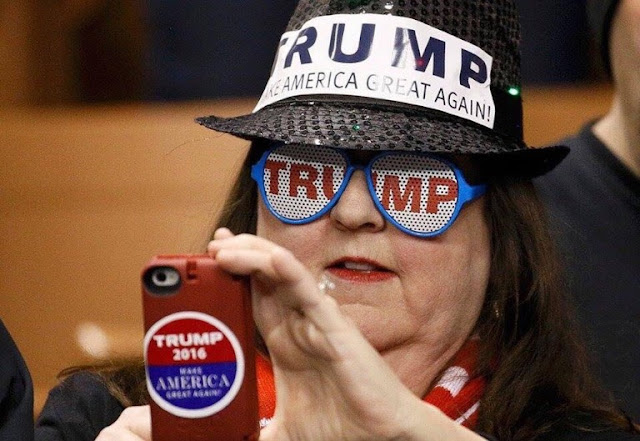 Trump will be better prepared next time. 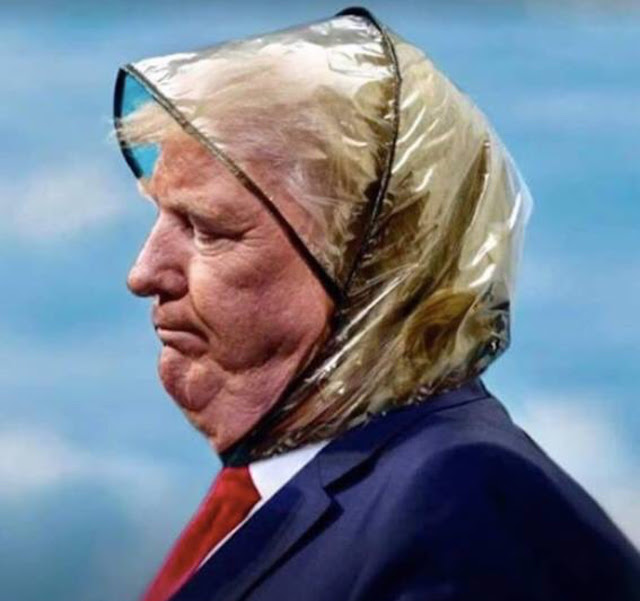 And they can now have a Trumpy Bear to hug when he's not around.

Of course, like almost everything to do with Trump, there's also a sinister side story.

Like its ancestor, the Trumpy Bear becomes more sinister if you understand its origins. The ad begins on an ominous note. “A storm is coming,” a husky voice says. “You cannot defeat the storm. I am the storm.”

What does a storm have to do with stuffed bears? The answer is disturbing. Those words are the slogan used by QAnon conspiracy theorists, who believe Trump is a heroic figure fighting a secret network of pedophiles that control Hollywood, the Democratic Party, and the so-called Deep State. The Trump Bear is the cuddly avatar for one of the most unhinged factions of American political life.

You know, twenty-five years from now we're going to have trouble explaining this nightmare.

But if we put a Trumpy Bear in a time capsule, it should be a lot easier...

I was hoping they'd have Baby Trump flying like a barrage balloon over over the Suresnes battlefield. It may not have been in keeping with the solemn dignity of the ceremony, but then, neither is Trump. The man diminishes every ceremony he attends and everyone who enables him.

Don't snowflakes melt in the rain or is donnie mad because his side lost WW2?

It would have been funny, but not a good move on the part of antiwar organisers, who are often accused of not respecting the sacrifice of troops.

There will be plenty of opportunities to get him, like any chickenhawk.

I wonder if Justin Trudeau still has the WWI Flying Ace Snoopy that Pat Nixon brought as a gift in 1972. It's probably not in the best of condition if so, but even still, I'm sure it could take Trumpy Bear in a fight. And I don't mean the plush animal. I mean the Orange Baron himself.

"The Russian government recently responded to the DNC's hacking lawsuit, saying that even if it did hack the DNC, that was a military activity exempt from prosecution due to Moscow's sovereign immunity. "

So the ReThug's aided and abetted an Act of War by Russia against the US.

Trump has ever cared about the military because he doesn't care about anything expect himself. He never inconvenianced himself for anything or anyone. His distain for the military is demonstrated by his willingness to suggest the close counting of ballot counting, which would result in many military ballots not being counted.

Trump is a wimp. He's not a commander in chief, but a coward in chief.

We have also seen his disdain for Fire services and firefighters...

HI rumleyfips...I have often thought about that myself. Who exactly was the Drumf family cheering for. And does keeping a copy of Hitler's speeches on his bedside table as his first wife said he did, give us a clue as to where his true sympathies lie? I wouldn't trust Herr Trump as far as I can spit...

Hi Jackie...Where do you dig up such neat information? I love it. And I also like the idea of the cowardly Trump running for cover from flying ace Snoopy, holding on to his hair with both hands.😂

Hi Jay...that's interesting. I hadn't heard of that before. Let's hope Mueller is fully informed and can put Trump and his traitorous gang in the place where traitors belong...

Hi e.a.f...The fact that Trump applied and received five deferments from the Vietnam War after attending a military school, and playing a lot of sports, marks him as a coward right from the beginning. And you're right, that shallow egomaniac is no commander in chief...

Hi Lagatta...I suddenly had the vision of Trump at the top of a large fire fighter's ladder. Then he reached for his tweet machine, and tumbled into the flames below. But of course it was too good to be true, and when I awoke I was very disappointed...😼