Is Andrew Scheer Losing His Marbles? 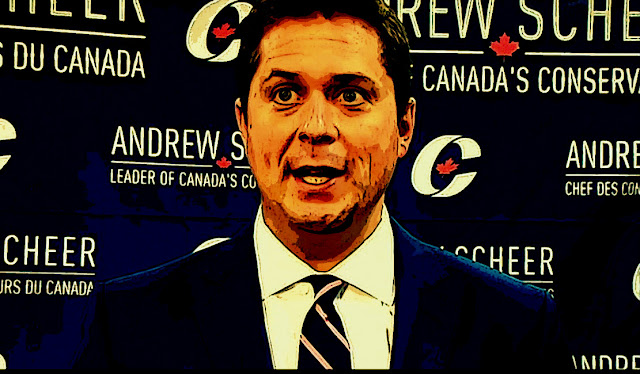 I didn't get a chance to see Andrew Scheer's reaction to the court decision on the Trans Mountain pipeline until late yesterday evening.

But when I did I was shocked, for he looked like a real mess, like a man becoming unravelled, or a young Bela Lugosi.

And when a reporter asked how he felt about this tweet. 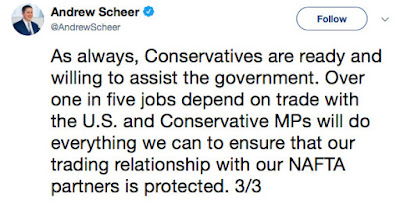 I thought he was going to break down and scream. 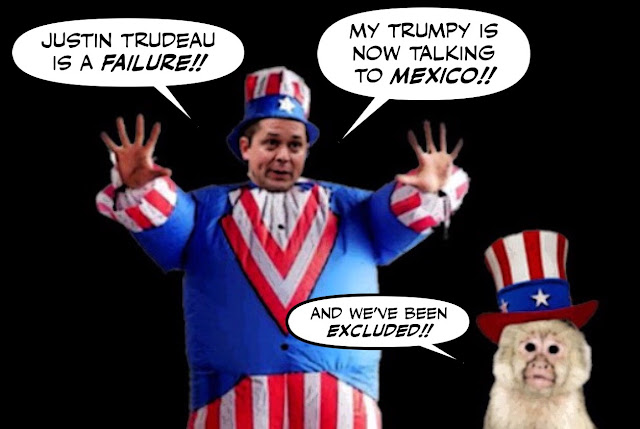 His crass attempt to stab our NAFTA negotiating team in the back has clearly backfired.

The polls must be in. Canadians must have made it clear they don't like traitors.

For when they asked him about that he stuttered so much I thought he was having an epileptic seizure.

But that was nothing compared to this tweet he put out shortly afterwards.

For it was seriously CRAAAZY... 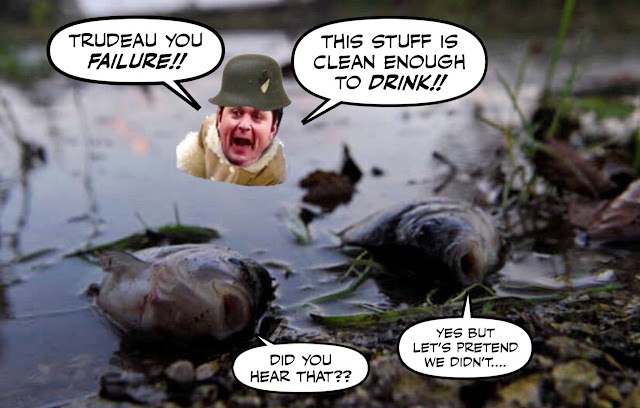 And when the Globe reporter Gary Mason called him out...

Compared him to Donald Trump, and all but questioned his sanity.

Scheer only dug himself in even deeper...

Which had a lot of people wondering whether he really was losing his marbles.

Which is a good question, for ever since Maxime Bernier made it clear he wants his job, Scheer hasn't been himself.... 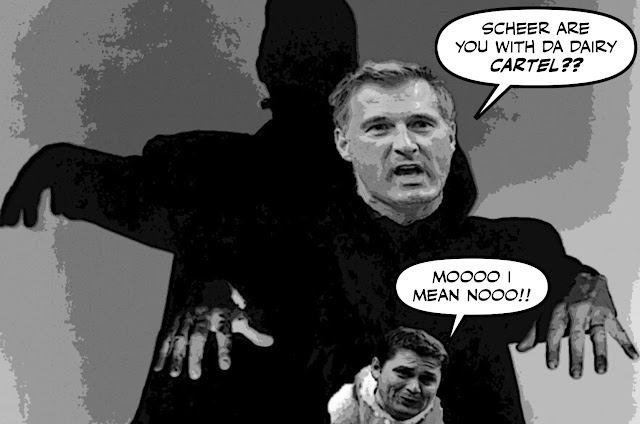 And where once his habit of including the word "failure" in every attack on Justin Trudeau struck me and others as mildly amusing.

Now it's starting to look creepy... 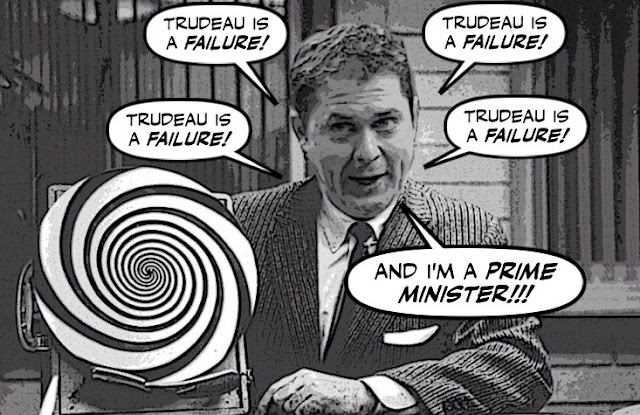 And one can only imagine what he might do if he ever became Prime Minister.

Yup. Scheer has been showing us his true colours.

It's not a pretty picture.

And we have been warned... 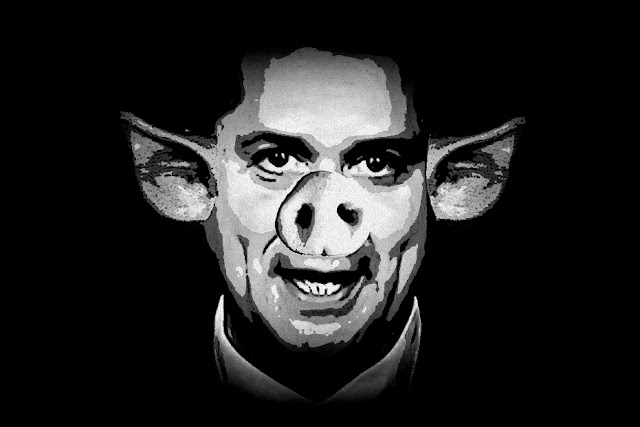 I saw that tweet about the oil. Yup, it is very Trumpian. "Clean coal," "clean oil," someone else on Twitter said "now do 'clean asbestos'." Failing on his own, asbestos he can. Andy should get a job as a tobacco lobbyist advertising for organic, gluten-free cigarettes. Or perhaps he'll work for Doug making a pitch for liver-friendly beer.

Even the phrasing sounds like that line from The Manchurian Candidate. "Hamish Marshall is the kindest, bravest, warmest, most wonderful person I've ever met in my life." "Tar-swamp oil is the cleanest, greenest, most ethical and environmentally-friendly energy source I've ever seen in my life." "Donald Trump is the fittest, smartest, handsomest, most tremendous stable-genius president I've ever seen in my life." Andy probably mixes this with daily Stuart Smalley (or Stuart Bigly) affirmations looking in the mirror each morning. "I'm good enough, I'm smart enough, and doggone it, people like -- TRUDEAU IS A FAILURE!" Then smashes the mirror in a fit of impotent rage.

Well, in speaking of the Saskatcheweenian Cana-date, Andrew Scheer is the dumbest, dullest, lamest, most cowardly cardboard cutout of a scripted, stilted, incompetent political hack I've ever seen in my life. He's not good enough, he's not smart enough, and doggone it, he's just not ready. Sad.

OT but, Simon, you must have seen this. Trump lamented the fact that he can't "kill" Trudeau and the Canadian trade negotiators. OMG, I hope Justin has food tasters and stays away from windows and tall buildings until at least 2024.

Canada won't fold so Trump wants Trudeau DEAD. I am so sorry for what 62 million ignorant fellow Americans and a handful of vodka-swilling astroturfers in Mother Russia have done to your beautiful country.

for all Trumps faults and they are many, he is just a biz man working the street the way he has always done. It made him prez and how he feels about Justin is irrelevant.

Scheer was always a weirdo even when he was the Speaker of the Commons. He was Harper’s boy and just did what he was told. Now that he’s under attack he can’t take the heat. The alt-right fanatics around him like Hamish Marshall are the ones telling what to do. He’s a total loser.

As to the question: he never had his marbles, so how can he be loosing them.

Scheer is out of his league. He was out of his league when Harper put him in the speaker's chair and he wasn't good at it. My take on Scheer, he isn't that bright. We may not like all of those Conservatives but some of them are very bright, Scheer just isn't one of them. He'll carry on because he feels he has to say some and is most likely being advised by people who have other agendas and don't care if the Con party sinks.

hi Jackie...yes, this just about sums it up:

Andrew Scheer is the dumbest, dullest, lamest, most cowardly cardboard cutout of a scripted, stilted, incompetent political hack I've ever seen in my life. He's not good enough, he's not smart enough, and doggone it, he's just not ready. Sad.

He is by any measurement unfit to be Prime Minister, but then I think of Doug Ford, and I think ANYTHING is possible...

Hi Jackie...yes I saw that, and it is outrageous. But hopefully it will make Canadians even more determined to not let him push us around. Who could have imagined that a U.S. president would treat Canada in such a manner?

Hi anon@6:44 PM...yes he is a weirdo, he was a lousy Speaker, but it's his early political life that interests me. For if Stephen Harper flirted with right-wing extremists. Scheer was drawn to them like a moth to a candle. Stay tuned for more developments....

Hi e.a.f...Yes, out of his league would be a pretty good description of our man Scheer. Except for one thing, he's a world class liar, and that's one of the things that make him so dangerous....

I wish time and location where on his tweets, 2AM the Rempel wine cellar?
The idea of the most ethical product is such a progressive notion. I think Norway would win with Oil.

"By every possible metric our oil is the best" Is Hammish doing Trump now?
I suggest we engage SETI to search for intelligent life in the Conservative Party.