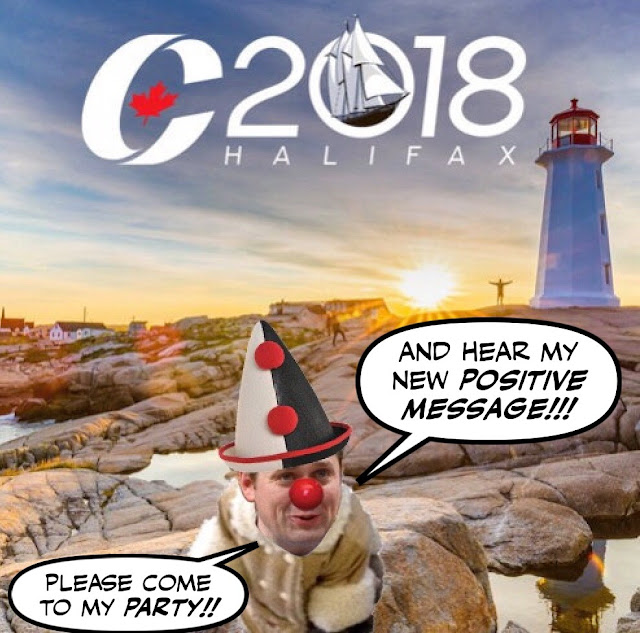 Andrew Scheer had hoped that the Con convention in Halifax would be a shiny affair, a glitzy political coming out ball.

Where he would introduce himself to the millions of Canadians who still don't know who he is, and seduce them with his new/nouveau "positive message."

And they would scream "Andy, Andy, we NEED you to be Prime Minister!!! 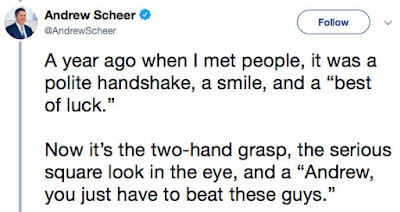 But then Maxime Bernier said he wasn't coming, and it all went horribly wrong. 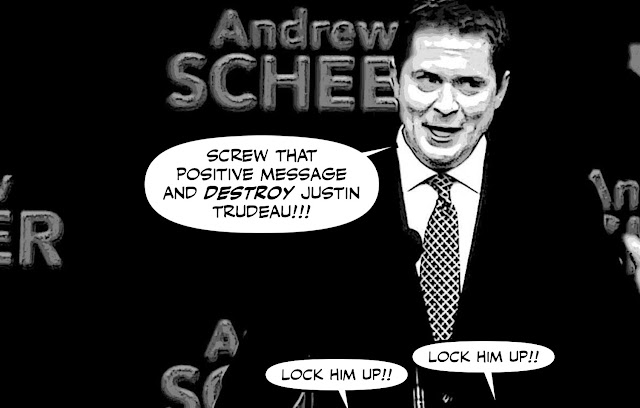 Mad Max stole all the headlines, Scheer was left looking like a grim nerd.

And as for that "positive message," it went down in flames...

To be replaced by the usual toxic Trudeau hate bubbling out of every orifice.

But then, why should we be surprised?

When Scheer and his sleazy gang have been whipping up hatred for months, for crass political purposes... 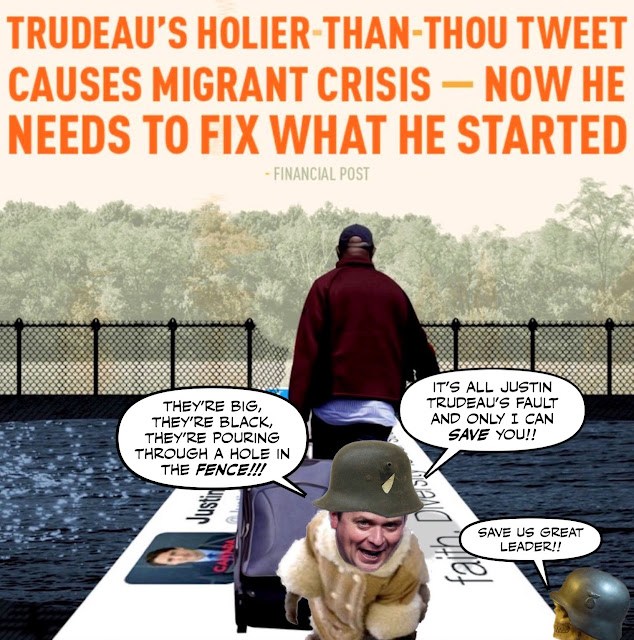 Hate is what they do best.

It's always the elephant in the room... 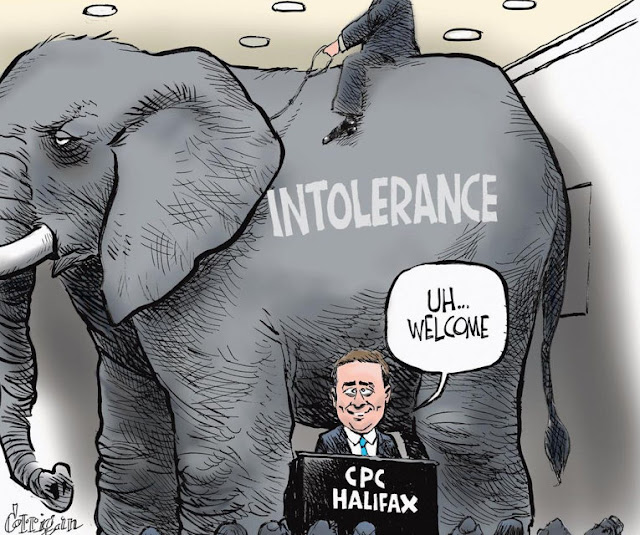 And if you're wondering where that bestial Con hatred comes from, you might want to ask their campaign manager, Hamish Marshall, how much he misses his old Rebel friends.

Conservative Leader Andrew Scheer’s national campaign manager was seen speaking with members of Rebel Media outside of the party’s convention in Halifax, even though the far-right website is barred from covering the event for being an “activist” group.

Or ask yourself why the Con establishment is now trying to mock Laura Stone for having dared to write that story... 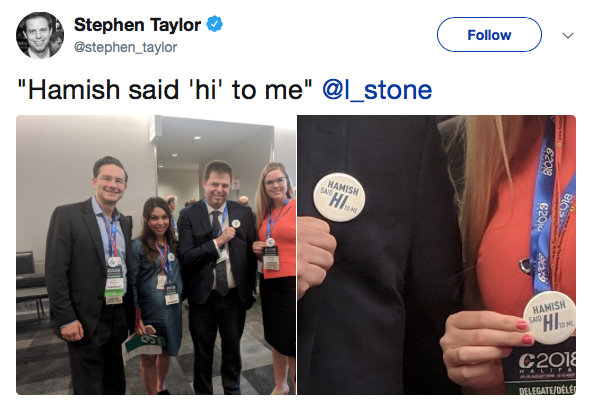 Even though the story is a legitimate one. We really need to know who is trying to drag this country to a very dark place,

And those Cons in that picture, especially Pierre Poilievre and Stephen Taylor their digital director, need to explain why they find that funny. 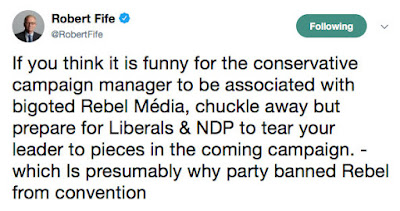 He backed up his criticism with some photographic evidence. 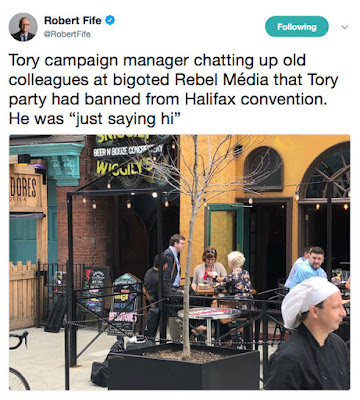 And then dug in his heels as hordes of Cons tried to discredit him.

If you think it is ok for the conservative campaign manager to be associated with an anti-Muslim & semi white nationalist hack news organization, then good luck defending that in the election campaign. https://t.co/UeUAybDbdo
— Robert Fife (@RobertFife) August 25, 2018


Or others, like the former senior Con operative Fred Delorey, tried to turn his criticism into a joke.

Are you are supporter of Rebel Media? Do you endorse the anti-Canadian Muslim and semi white racist views espoused by the Rebel? Do you agree with your party’s decision to ban Rebel from your convention? As a former party director, your views on this issue is newsworthy. https://t.co/1Lo4PpYX6p
— Robert Fife (@RobertFife) August 25, 2018


But it seems to me that a lot of time and effort went into trying to brush off Marshall's meeting with his former Rebel buddies. It seems to me they are trying too hard.

Which suggests to me at least that the Cons are trying to hide something.

And of course Fife is right.

As I pointed out the other day, having a former director of Ezra Levant's hate mongering Rebel as your campaign manager is truly shocking... 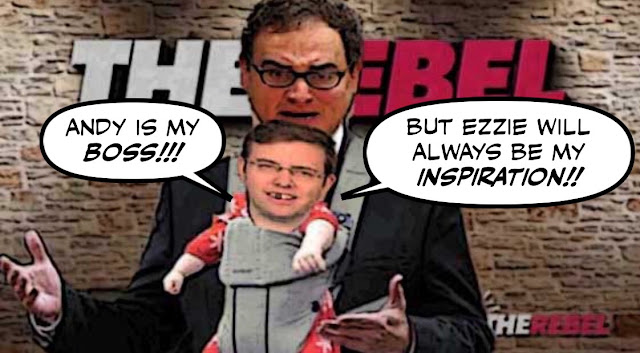 It's NOT normal, it's disgraceful.

And now that Hamish Marshall has clearly shown that the ties that bind are still strong, both Marshall and Scheer have been exposed, at last. 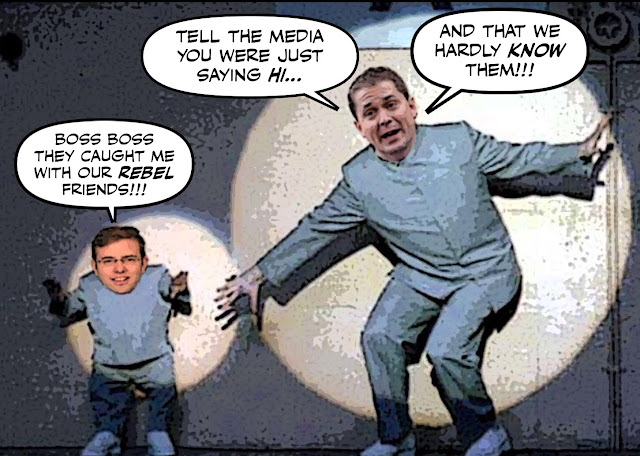 I don’t know why it took so long for our useless media to look at the relationship between the Cons and The Rebel.

But now that they have, we need to encourage them to dig a little deeper.

Find out where all those fake news stories, and Twitter bots are coming from.

And do what needs to be done to save this country, from the right-wing extremists who would destroy it...

Robert Fife and Heather Malick are too of the few not afraid to call a spade a spade. Anyone buying the Russians are ruining our democracy story might ponder, just what Postmedia is doing in Canada, and who owns it, and owners dictate content.

"These are not the Rebel scum stormtroopers you're looking for." Sorry Andy, you're no Jedi. You're a shitposting Sith stooge operating an army of Twitter and Facebook droids. The only people falling for your mind tricks are people without minds to trick.

I guess he wasn't expecting a Hamish inquisition. After the cons voted to support ending birthright citizenship due to fear-mongering about "anchor babies"? To paraphrase that beacon of intellect Rick Perry, oops, his jackboots dun stepped in it this time. That heffalump in the room should have a GOP banner on it. We can feel every poke and hear every grunt -- er, whistle.

Shame shame shame on Andrew Scheer and Jagmeet Singh, the CPC and NDP and their MPs and taxpayers funded trolls who do nothing but smear and bully Prime Minister Trudeau and Liberal supporters on comment forums and social media.

Shame shame shame on Canadian media such for being complicit in this smear campaign and sullying the good work of this government!!

Shame shame shame on them all. Just more Harper era damage for PM Trudeau to repair when his government cuts their funding.

We need a public inquiry or a police investigation. If top government officials are getting their orders from the scumbags at The Rebel isn’t that a security problem? Let’s hope the media will now start asking more questions about Hamish Marshall. It’s about time!

I agree, the Cons have gone to a lot of trouble to try and turn this shocking scandal into a joke, They are trying to cover up something, and we need to find out what that is.

On another issue, Postmedia published an "analysis" by the Montreal Economic Institute attesting to why free university tuition was a bad idea. However I know that they will definitely NOT publish a retort by IRIS, the left think tank counterposed to the MEI/IEM, their pet right think tank.

I'm sure Postmedia will also have reasons why public dental care is a bad idea as well ...

In no way does it prove that the NDP should never form government.

As much as they would like the perception that they have nothing to do with the rebel the fact is they are up to their eyeballs in rebel scum.
Actions speak louder than words.

Now, having said that, it truly is a stupid thing to have some one from ?The Rebel to handle communications for a major Canadian party. It will be up to the voters to decide whether they like that or not. The Conservatives risk loosing a large number of voters by associating with people like those who support The Reble, given our country is really quite multi cultural. Not only do we have people who immigrated from other countries living here, but we do have First Nations and they certainly won't be supporting the Conservatives if they go on with this racist attitude.'

Very well then, you love Trudeau so much you can have your eastern canada village idiot. We in the west will have to start looking to leave this bull droppings hole called canada and leave with your clown.