Donald Trump, NAFTA, and the Shame of Andrew Scheer 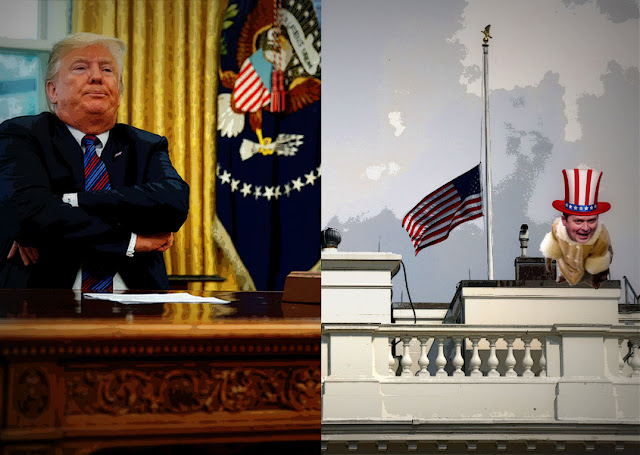 Donald Trump has been busy recently, lowering, then raising, then lowering the American flag over the White House.

President Trump, under enormous public and private pressure, finally issued a proclamation of praise for Mr. McCain on Monday afternoon, two days after the senator’s death, and ordered the flag to be flown at half-staff seemingly in the only place it wasn’t already, the presidential complex.

Which has only made him look even more cowardly and more classless, if that's possible.

But now it seems the desperate Trump wants OUR country to raise a flag, a white one. 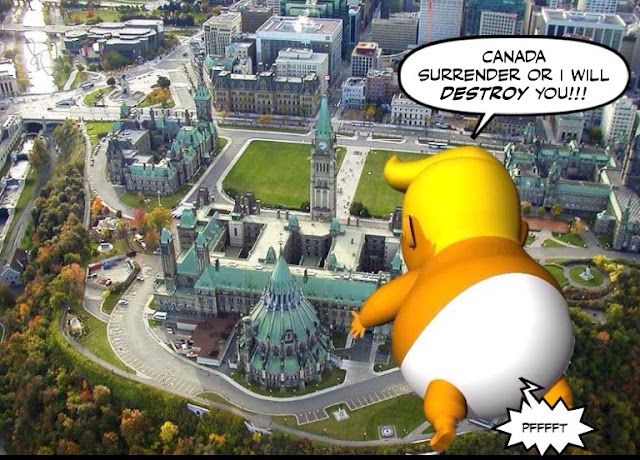 After he struck a deal with Mexico and is now threatening to freeze out Canada.

President Trump on Monday said the United States and Mexico had reached agreement to revise key portions of the North American Free Trade Agreement and would finalize it within days, suggesting he was ready to jettison Canada from the trilateral trade pact if the country did not get on board quickly.

Only to run into a wall of resistance from American business leaders.

“Because of the massive amount of movement of goods between the three countries and the integration of operations which make manufacturing in our country more competitive, it is imperative that a trilateral agreement be inked,” Jay Timmons, president and chief executive of the National Association of Manufacturers, said in a statement.

And lawmakers in the Congress.

Any agreement that doesn’t involve Canada is likely to face legal challenges and intense opposition from Congress, which had granted the Trump administration authority to renegotiate Nafta as a trilateral deal.

Senate Finance Committee Chairman Orrin G. Hatch, a Republican from Utah, said in a statement that improving Nafta would help American businesses, manufacturers and farmers but that a bilateral deal was not the answer. “To achieve that goal, a final agreement should include Canada,” he said.

But despite all of the above, and the need for Canadians to show a united front in the face of this new threat, the ghastly Andrew Scheer just couldn't help himself... 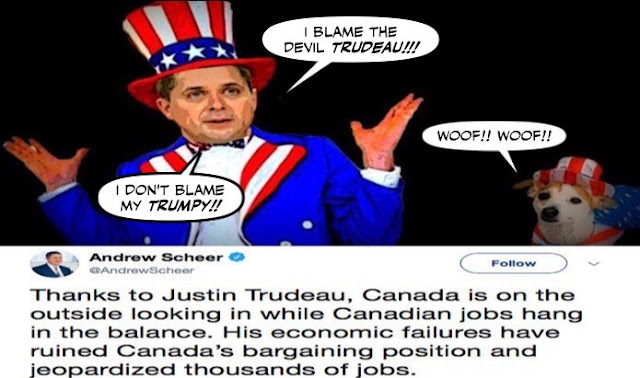 And is betraying his country. Again.

Please note the word "failure" that the slimy Hamish Marshall insists be used in every Con attack on Trudeau.

And isn't this grotesque spectacle familiar?

When the NAFTA talks began Scheer sent a delegation down to Washington to try to torpedo the talks by bringing up the case of Omar Khadr... 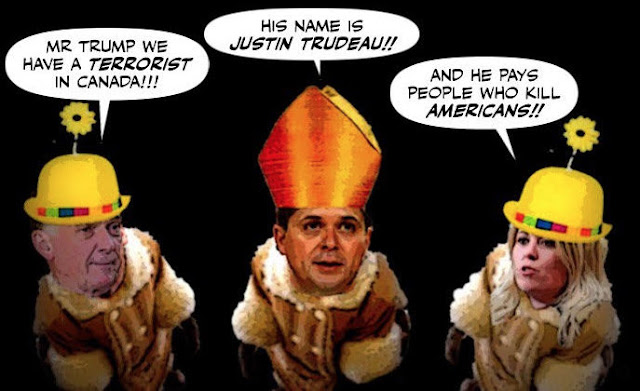 And this is just more of the same.

We've seen this shabby show before... 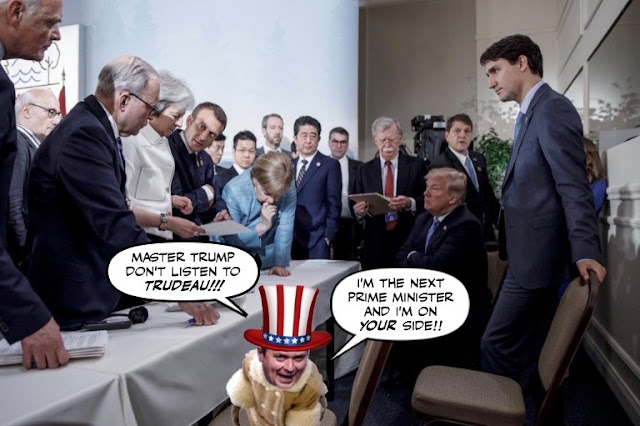 And it should sicken every decent Canadian.

Andrew Scheer should be ashamed of himself.

And here's to Chrystia Freeland and Justin Trudeau... 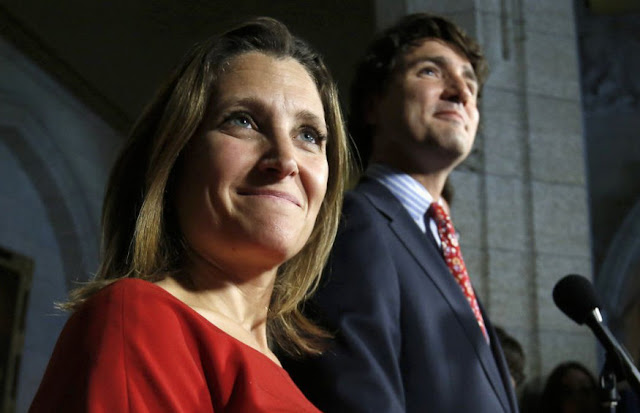 And all those on Team Canada.

Who have been working so hard, and standing so proud.

Defending our country from those who would destroy it.

Down with the Con traitors.

Listen to the callers to talk radio, and the hosts, they are parroting the Scheer line. Its disgusting. Also Mexico stabbed us in the back, but the MSM is saying dont believe your own lying eyes. The media is the monster.

Any politician who "Smiles constantly" gives me the creeps! What is behind that mask????

So far, it looks like Canada got its way with the sunset clause , the auto worker wage and car content. Now Mexico, the Wall Street journal, top Republican figures and American business organizations are calling for a tri-lateral deal, not a Trump deal.

The big orange baby is ready to risk thousands of jobs because his bloated ego is still feeling slighted by JT.I hope he stands up to the orange doofus for it wont be long before that incompetent dictator is removed from office.
As for Scheer, he likes to call JT a failure as a way of distracting from his own life as a failure. Andy is a failure, na-na-nanana!

Trump is a misogynistic prick who cannot stand the fact that Freeland is a woman and smarter than he is. (Putin hates Freeland for his own reasons.) His petty and outright perverse jealousy of Trudeau is obvious, so he plays bully games to see if the "little pretty boy" on the playground will cave under pressure. It doesn't work. Trudeau and Freeland are the adults in the room. Trump is a petulant brat, and Scheer is an obnoxious lackey who betrays his own country to suck up to the big guy out of his own hatred for Trudeau. He should be a-Schamed of himself. But he's a Con, so of course he's not.

One way or another, Trump and his fact-averse cult base will spin any deal as Mexico and Canada getting "cucked." Anyone with two brain cells to put together -- so, nobody on the right -- knows that's not the case. The problem is the media plays the "fair and balanced" game of legitimizing him and the cons' perspective so as not to "offend" the unstable snowflakes (or risk losing a penny in ad revenue), instead of reporting the straight facts. Reality, as opposed to reality television, has a small and big-L liberal bias. The global marketplace is not the personal piggybank of one Donald J. Trump.

I have to say in defense of Donald, the Mexican Auto Trade deal is a liberal dream, now if only he would leave our cows alone. Marketing boards for agriculture have proven to be the solution to big agriculture in the USA>

There was a news report advising the Mexican President did say the agreement would have to include Canada. So we shall see. No need to cast aspersions on the Mexican politicians just yet.

You almost have to feel sorry for Scheer. He just doesn't get it. Trump needs NAFTA more than Trudeau does. Trump's has 35 states whose main trading partner is Canada. Orin Hatch has already come out and said, Canada needs to be part of the deal or there will be too many jobs lost in the U.S.A, because we are their biggest trading partner. November 2018 is going to come sooner than Nov. 2019 and Trump will have to fold.

Trump is clearly unhappy with Freeland because she won't climb into bed with him. When he sees her, he see the same brains Merkle has, but with a better figure and oh so much younger and he can't touch her. Poor Trump, lusting after our Cabinet member and not getting anywhere. of course Putin doesn't like her for similar reasons and her position on Ukraine. Ah, those boys, need to get lives somewhere else. Ms. Freeland is a force to be reckoned with and the boys are simply can't understand why a young attractive woman is smarter than they are and doesn't give a shit about them.

If Trudeau and Freeland tell the U.S.A. we're out because we're keeping our diary system as it, I'm good with it. Trump will only push further and further. At some point we need to have a line which they can't cross and it might as well be about the milk we drink. Good as anything.