How Much Damage Can Maxime Bernier Do The Cons?

When Maxime Bernier decided to break away from Andrew Scheer and his "intellectually and morally corrupt" Cons.

And in the process made Scheer look like a cowardly leader. Or no leader at all.

The big question was how much damage could Bernier do to his former party?

Now a first poll is in, and Scheer must be quivering in his boots. 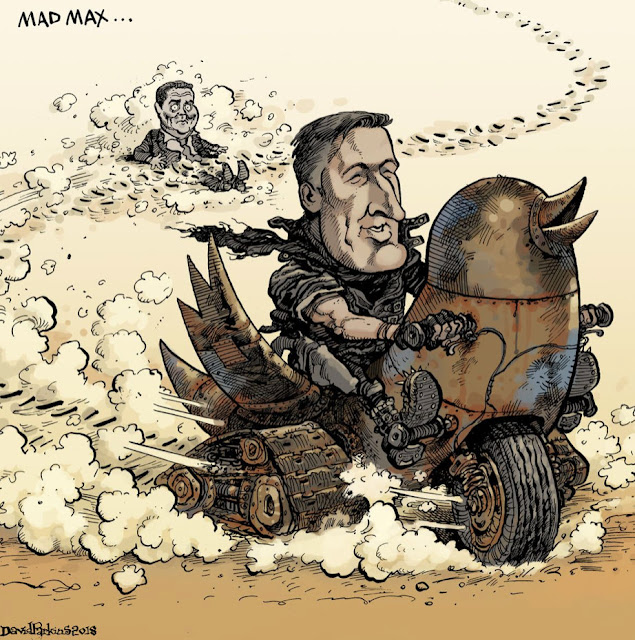 For the Abacus poll suggests the damage could be considerable. 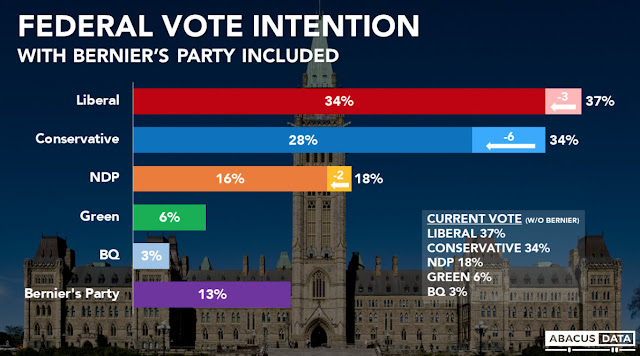 A Bernier Party could draw support away from all the main political parties, but the Cons would be hardest hit. 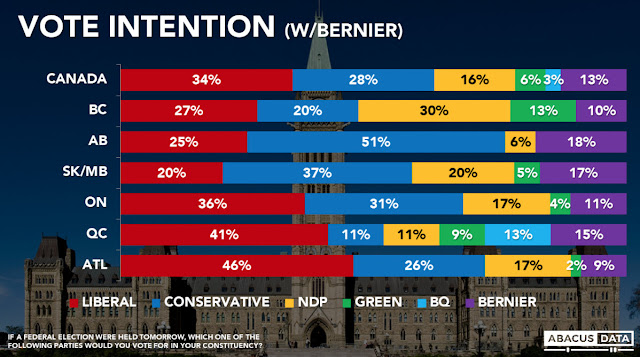 And this result in Quebec would be devastating. 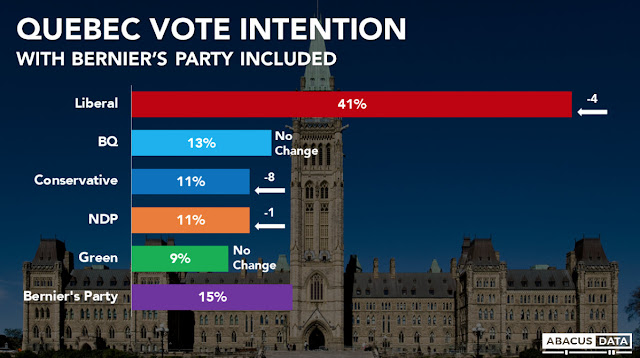 For it alone would almost certainly guarantee another Liberal majority.

And when one out of every five Cons believes that their party is too intellectually corrupt to be reformed... 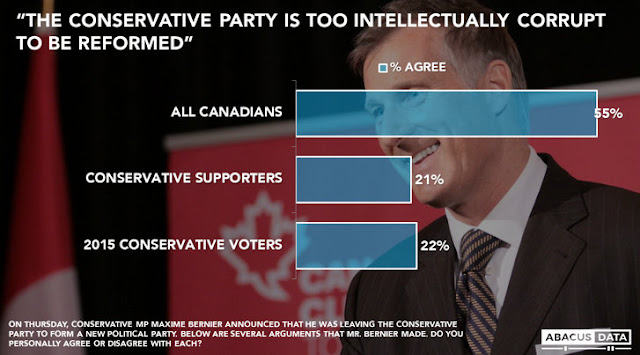 It's obvious that Scheer has a problem.

Of course this whole poll is speculative, since Bernier hasn't yet formed a party.

Although he claims he is hard at work doing just that. 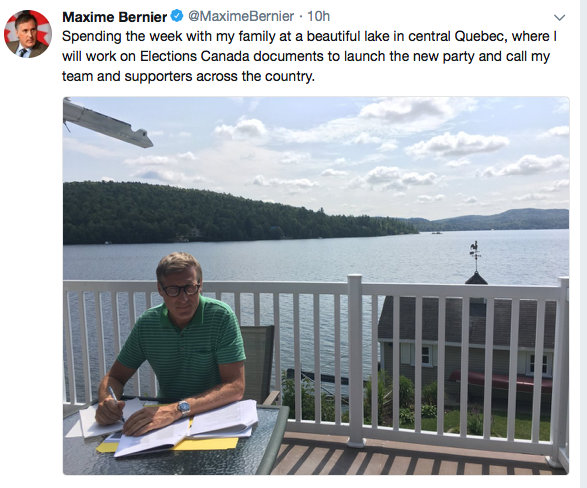 The results show that a considerable minority of Conservative voters find Mr. Bernier and his message attractive and confirm that he has the potential to divide and weaken the prospects of the Conservative Party heading into the 2019 election.

The most important impacts could be felt in Ontario and Quebec, where 199 of 338 seats are at stake. Seats the Conservatives might be considering potential gains could have a greater chance of falling into the Liberal column.

Bernier has more potential support than many might have imagined. More than enough to form a party.

And the grubby Scheer is caught between a rock and a hard place.

Given that 20% and 40% of current conservative voters agree to some extent with the views expressed by Mr. Bernier, Conservative Leader Andrew Scheer can ill afford to ignore this threat.

However, if he puts too much emphasis on trying to assuage these sentiments, he risks alienating mainstream voters who do not find Mr. Bernier’s arguments appealing, and also drawing constant attention to the fact that there are divisions within his Party.

Which is of course exactly where we want the Cons.

Fighting themselves, trying to out racist each other.

And heading for oblivion...

Yes please split that con vote, split in 3 or 4 so that those racists NEVER hold power ever again.

I love listening to the paid talking heads say over and over, its a nothing burger. Go Max GO

These figures are a bit shocking. Scheer is not exactly an inspired leader and the rest of the gaggle surrounding him are not outstanding but I am surprised at the apparent amount of discontent.

Still, these are very preliminary results and, to be honest, an N of 1,000 is a bit dicey. It is just sufficient to make these statements but I'd be a lot happier with,, at least triple the sample size.

Purple, EH? Hmmmm this is getting interesting!

Don't get too excited, this shows Bernier can pull support from all parties, the possible voter pool IS big enough that it is a possibly that he could win, no one thought Trump could win, but he did.

I ordered a DVD of God Save Justin Trudeau and I'm finally going to get to watch it. After all, the last election saw a boxing match as a metaphorical precursor to the eventual outcome. Looks like Canada's going to see another pay-per-view prizefight, this time with Andy and Max in the ring David Duking it out while Justin does the play-by-play. Now let's get ready to FUDDLE DUDDLE!

Please Please Simon can we have an airshow post about the two time alledged Traitor Air Show, first he insists we surrender to the Saudis who just blinked btw, and next he calls for us to let Trump stick his trade probe where the sun dont shine.

littel Andy was on 640 Am cheerleaded saying if he was doing it it would have been so much better and its Justins fault he cant control Trump.

By the time the next election comes around the question will be: Bernier? Bernier who. He isn't a well know name in B.C. and I doubt he is in the rest of western Canada.

This poll has been done now, during a time of the Convention, suggestions regarding citizenship, etc. He doesn't have the forces of a major party behind him, nor the dedication the Greens/NDP have. He's toast. of course any one is free to remind me how wrong I am in next year.