Will the Cons Bring Back Stephen Harper From the Dead? 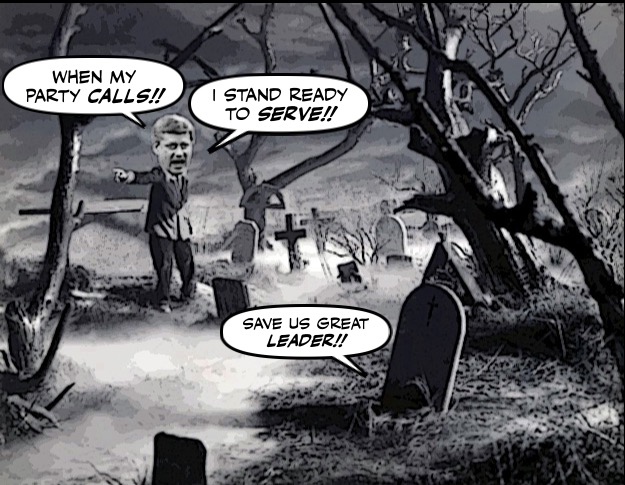 It's almost impossible to believe. It's like a scene out of an old made in Harperland horror movie.

Stephen Harper may have led his Con zombies to disaster. His depraved rule may have disgusted more Canadians than any other leader in modern Canadian story.

But it seems many of his faithful followers miss him so much, they want to bring him back from the dead. 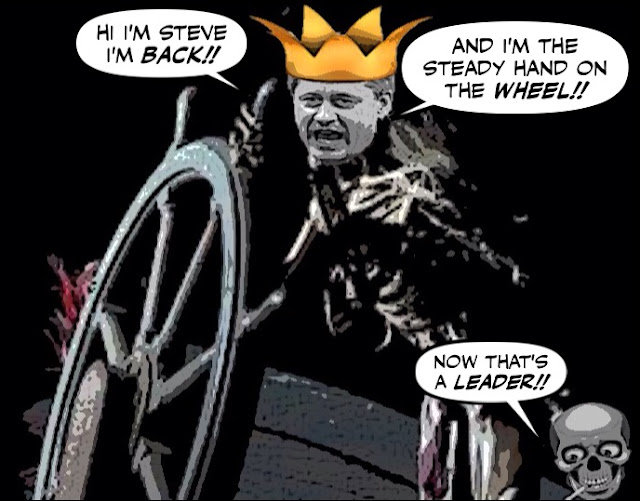 And make him their new old leader again.

Stephen Harper may have been swept aside in last year’s election by a powerful desire for change, but a new poll suggests that at least among Conservative voters, he’s the preferred choice to make a comeback as the party’s leader.

According to new data from EKOS Research, 28 per cent of declared Conservative supporters say the former prime minister is their preferred choice for next leader of the party.

Which tells you how desperate the Cons are, and what they and other Canadians think of the other leadership candidates.

Besides Harper, the poll also let respondents choose from five other leadership contenders: Peter MacKay, Kevin O’Leary, Maxime Bernier, Lisa Raitt and Kellie Leitch. The biggest chunk of general respondents, 36 per cent, said they wanted to support someone other than the six options given.

That number was 17 per cent for Conservative supporters. 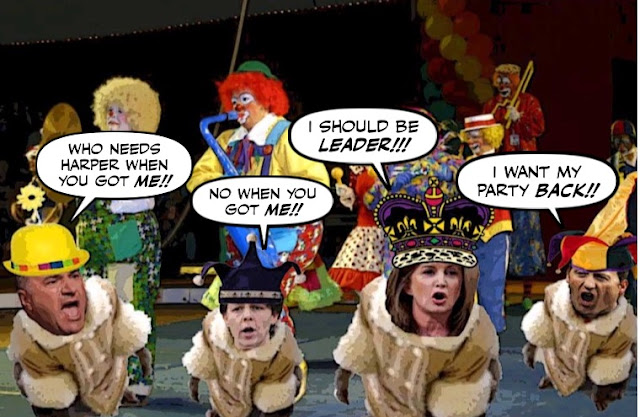 The only Con lineup worse than that one would be this one... 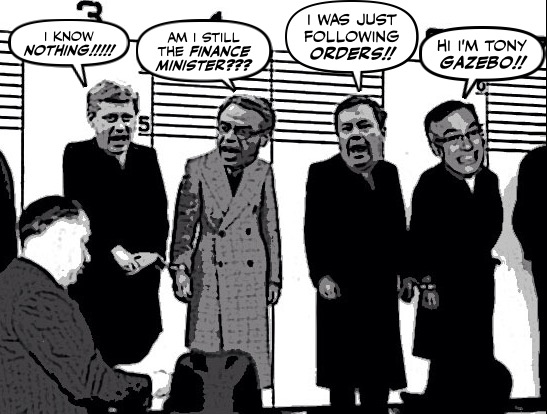 But while it may seem incredible that anyone could even conceive of allowing Boss Harper to return, and seize control of the Con mob again.

it will be interesting to see whether these new poll  numbers will encourage those who have been quietly trying to get a draft Harper movement going.

Because as I've mentioned before, the Con establishment is only interested in preventing the so-called Red Tories from taking back the party, and avoiding an all out civil war with the western Reformers. One that could tear the Cons apart.

Just like some members of the Republican Party establishment would rather lose the election than have Donald Trump take over their party.

And some of those party bosses believe that Harper is the only one who can hold the Cons together.

A belief that I'm sure that power hungry control freak is only too eager to stealthily  encourage... 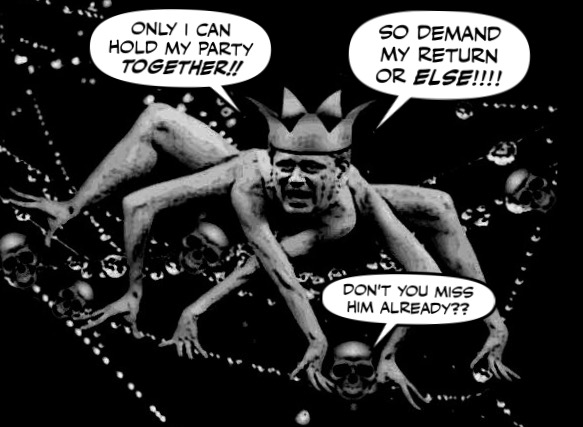 The plan was to make this speech at the Con convention next month the beginning of Harper's triumphant political comeback. 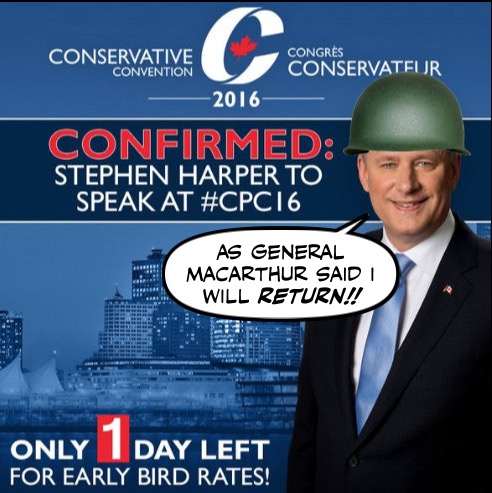 But sadly for Great MacArthur Leader the Duffy verdict has now blown that plan out of the water.

By reminding Cons and other Canadians, what he was really like, and how low he took the party and the country.

And Red Tories like L. Ian MacDonald have been quick to use the judge's scathing criticism of his ghastly PMO as just another reason Harper should not come back, even if he wants to.

There is no chance — none at all — of the Conservative party turning to Harper to lead it again. For that matter, there’s no sense out there that Harper would even accept a draft, in the highly unlikely event that one were to develop.

Just in the last week, the Harper PMO has taken a huge reputational hit from the judge’s scathing verdict in the Duffy trial. Not only did Judge Charles Vaillancourt dismiss all 31 charges against Duffy, he also delivered a blistering indictment of the Harper PMO’s cover-ups and abuse of power. The judge wasn’t asked any of these questions, but he answered them anyway in the riveting final 80 pages of his verdict.

So stay tuned this could get interesting. 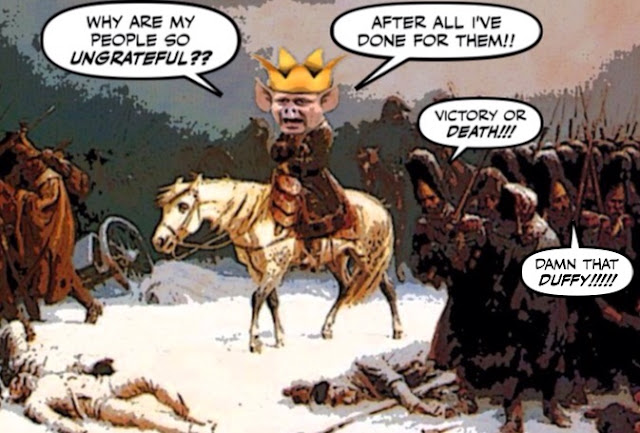 The Red Tories are exultant. The Reformers are sharpening their bayonets.

And the Cons are heading for a bloodbath.

Or death by mediocrity...

I used to say that the harpercons had no obvious choices for a leader who could inspire non-ignorant and/or stupid Canadians to vote for their shitty party.

But that having been said, the idea that today, the largest single bloc of harpercons' leadership choice is harper, is a staggering indictment of the party's limited talent base.

harper is a stupid, cowardly, corrupt mediocrity. And he's apparently the best they've got.

How those imbeciles were ever able to lord it over us all for ten years is an indictment of us as a people.

It is now official Simon, they're all nuts. They have to be to even consider bringing Harper back. The only reason would be as you said, to keep the Reform in the Con, which would again lead to more Cons in the pen.
I highly doubt Harper will have the guts to go against PMJT and risk another swift kick in the arse, I'm sure it's still hurting from October 19th.
If anything, their sorry state of affairs make for great entertainment as they slowly implode into oblivion.
JD

As I've said before and will write again, don't be surprised if he is the "new" leader of the Cons after the next convention. He wasn't ask to resign. He did it immediately. I'd suggest that was a strategy.

hi thwap...you're right it is a stunning indictment of the party's limited talent base. They are appallingly mediocre. And yes, how they were able to run this country into the ground for almost a decade, is an indictment of us all, and yet another example of the dangers of political complacency...

hi JD...well they certainly are desperate. When it first dawned on me that Harper could be considering a comeback, I couldn't believe it. But it does make perfect sense. He has an exaggerated sense of his own capabilities, he did recently lecture the Republicans on his to bring warring factions together, and he has always considered the Cons to be HIS party. Like you I doubt that Harper will go for it, not now after the Duffy verdict. But there are dark currents swirling around under the surface, and needless to say I'm hoping for a ship wreck...

hi e.a.f...after living so long in Harperland, I wouldn't be surprised by anything. Harper is hanging on, his behaviour can only be described as bizarre, so maybe he is so deluded he will take the plunge. But if he does I hope he knows how to tread water, or he will go straight down...