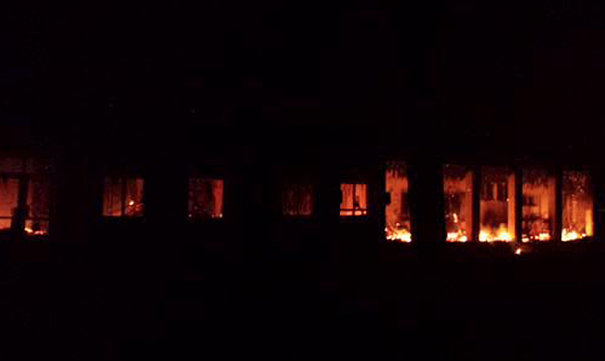 On the night of October 3, 2015 A U.S. AC-130 gunship attacked a hospital in the Afghan city of Kunduz, run by the humanitarian organization Médecins Sans Frontières/Doctors Without Borders.

And despite frantic calls from MSF doctors kept up its attack for half an hour.

Forty two staff members and patients were killed, many of them burned to death in their beds.

But today the Pentagon released a report claiming that murderous assault was not a war crime. 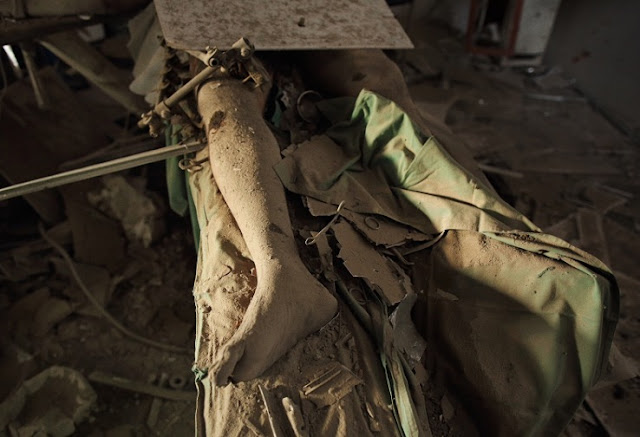 A US air strike that destroyed a medical charity's clinic in northern Afghanistan, killing 42 people, was not a war crime, the Pentagon has said. Confirming disciplinary charges against 16 US service personnel, General Joseph Votel said the "tragic strike" was due to human and technical errors.

So no-one will face criminal charges, even though MSF had provided the U.S. military with the hospital's GPS location, and this is no excuse.

"The investigation found that the incident resulted from a combination of human errors, process errors and equipment failures and that none of the personnel knew they were striking a hospital," he said. He added: "The fact this was unintentional takes it out of the realm of being a deliberate war crime."

And as MSF is demanding, we do need an independent investigation.

"Today's briefing amounts to an admission of an uncontrolled military operation in a densely populated urban area, during which US forces failed to follow the basic laws of war," said MSF President Meinie Nicolai. The charity repeated a call for an independent investigation into the incident.

If you have the time, you should read this long and detailed story on what happened on the night that death rained down from the sky.

The picture that emerges from these firsthand accounts, as well as from interviews with several high-ranking Afghan officials, is one of remarkable chaos and uncertainty, even by the standards of war. Those on the ground said it was not clear who was in charge, and those in charge seemed not to have had a clear understanding of what was happening on the ground at any given point before, during, and after the fall of the city.

For in addition to revealing a picture of mass confusion and incredible incompetence, it also makes it only too clear that the Afghan army that we helped train does not respect the Geneva Convention.

The general sense among the Afghan forces was that the war was going nowhere good. In a losing battle, all becomes fair, including the bombing of a hospital that many had come to believe was harboring insurgents.

And what's also clear is that the bombing of hospitals is becoming a deadly trend. With this Canadian supported clinic in Syria being the latest to be targeted. 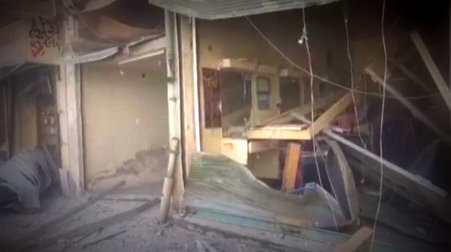 The Canadian branch of a medical non-profit reports that one of its clinics in Aleppo, Syria, has been destroyed, and is pointing the finger at airstrikes by Russian and regime forces.

And although thank goodness nobody was killed or injured because the clinic was closed, the results are still catastrophic.

UOSSM-Canada says that 1,400 people, mostly women and children, have now lost access to medical care as a result of the clinic's destruction.

And what is also clear is that these murderous attacks on hospitals have to stop.


So please help spread this message:

Hospitals, doctors, and patients are not a target.

Attacks on them cannot be justified.

And are always a war crime...

Anytime something goes wrong in the world everyone looks to the USA for aid, assistance, and on and on it goes.

What would you suggest we do Simon, line up the US soldiers and shoot them? I was an accident.

If I was the USA President the next time I was asked for assistance I would say simply go frig yourself. And you wonder why people are voting for the morally depleted Trump. Seems USA gets f;($3d over by everyone in return for their assistance!!!!!!

Funny how everyone turns to the USA for help and in return tries to commit terrorist acts against them in return.

There was NOTHING about this action that was accidental. This is, AT LEAST, the 2nd time the u.s. imperial forces have purposefully targeted a hospital YOU FUCKING MORON! TAKE YOUR ILLITERATE HEAD OUT OF YOUR ASS AND READ UP ON SOME OF THIS BEFORE YOU ATTACK PEOPLE LIKE SIMON!
Move to the u.s. you nazi motherfucker!!!

"Anytime something goes wrong in the world everyone looks to the USA for aid, assistance, and on and on it goes."

It was a war stated on shaky pretenses. (The United States claimed that the Taliban were refusing to turn over bin Laden, when in fact they were asking for evidence before turning him over - as any responsible government should.) It has turned into a war that has continued for no discernable reason, other than the refusal to admit that it was an unjustified war to begin with.

"What would you suggest we do Simon, line up the US soldiers and shoot them?"

Not even close to what Simon was saying. Of course, if you did respond to what he actually said, you wouldn't have much of an argument.

"If I was the USA President the next time I was asked for assistance I would say simply go frig yourself."

The world would be a far, far better place if the US would stop making wars with anyone and everyone.

"And you wonder why people are voting for the morally depleted Trump. Seems USA gets f;($3d over by everyone in return for their assistance!!!!!!"

You call Trump "morally depleted," yet you sound exactly like a Trump supporter. Interesting...

Nothing in war is an accident. Incompetence, I can believe - military intelligence, is after all, an oxymoron - but that still doesn't make it an accident.

I did not attack Simon, he is very accurate in most of his blogs and I love his daily blogs. Simon calls it as he sees it, and I simply did the same. And no I am not a Moron. And obviously I can read!!! Just be thankful that Canada has the USA as their neighbour. Canada would be the first to ask for USA assistance if attacked. Seems our F35's are on hold once again. Not a Trump supporter...... Voted Liberal. Now just waiting for their talk to match their walk. Sunny ways my friend, sunny ways........ Simon always allows the other side to comment, so anon 9:06, you need to get a grip or take a relax pill. Imperial forces LOL LOL...... Signed the "annoying mouse". LOL LOL

On May 2, 2012, the United States and Afghanistan signed the Enduring Strategic Partnership Agreement between the Islamic Republic of Afghanistan and the United States of America, a 10-year strategic partnership agreement (SPA) that reflects a shared commitment to combating terrorism and to promoting peace, democratic values and economic opportunity in Afghanistan and the region.. Following the entry into force of the Agreement on July 4, 2012, President Obama designated Afghanistan a Major Non-NATO Ally (MNNA) on July 6, 2012. Afghanistan is the first country to be designated an MNNA since 2004.

If it was an accident, and accidents do happen, many of will never know. the U.S.A. has swept so many things under the carpet, how can we believe now, that this act was an accident.

Yes many do expect the U.S.A. to help out if things go sideways, but this incident, I just can't give them the benefit of the doubt. There is just too much history of things being done deliberately.

The story given at the press conference, they got lost, decided to bomb something which looks like a target???????????hey haven't you every heard of an abundance of caution. If their radio wasn't working, try a cell phone.

I would have felt much better if the General had come out and just said, what do you think this is, a sunday school picnic. We bombed because we could and we wanted to. This is a war! anything which may have an enemy in it, we will bomb. At least I can understand that, its straight up front. the lies which get spun, I'm just not into it.

Religion and War....... Go hand in hand!!!!! I am so happy I was born with a moral compass that does not need adjustments every Sunday!!!!!!!!!! That fictional guy in the sky isn't helping his so called 6 day creation much except creating greed, racism and killing in his name sake!!!!!!!!!! "Annoying mouse".