Hillary Clinton and the Mystery of the Missing Transcripts 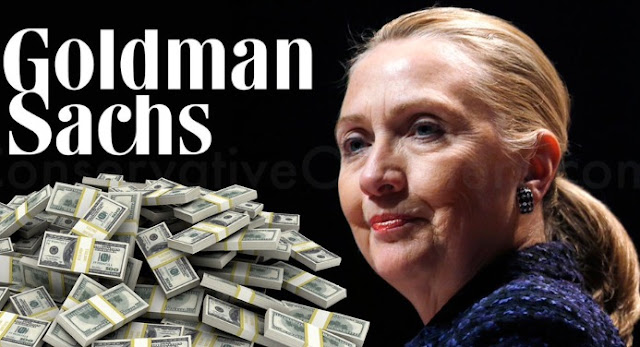 It's the greatest mystery of the Democratic race for the White House. The haunting question that won't go away.

Why won't Hillary Clinton release the transcripts of the speeches she gave to big banking institutions like Goldman Sachs?

She says she won't do that unless other candidates like Donald Trump do the same.

And since I find that answer singularly unpersuasive, I'm forced to believe this. 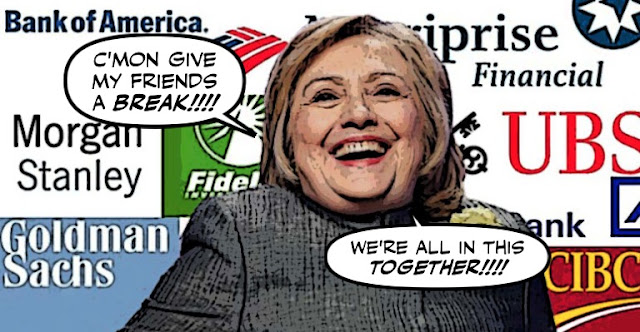 Clinton won't release the transcripts because they could destroy her candidacy.

The reason you and I will never see the transcripts of Hillary Clinton’s speeches to Wall Street fat-cats — and the reason she’s established a nonsensical condition for their release, that being an agreement by members of another party, involved in a separate primary, to do the same — is that if she were ever to release those transcripts, it could end her candidacy for president.

For as Bernie Sanders has suggested paying someone $225,000 for one speech can only mean one of two things: 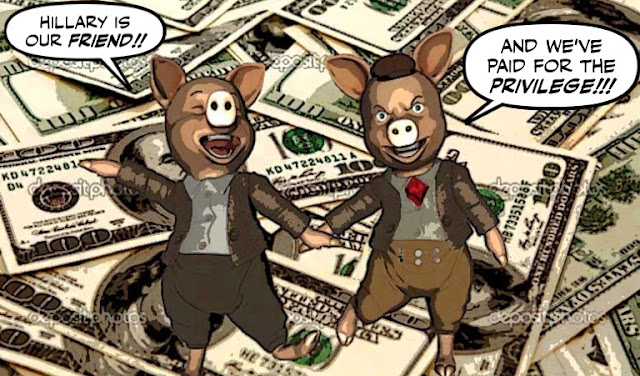 Mr. Sanders has implied that there are only two possible answers: (a) the money wasn’t for the speeches themselves, but for the influence major institutional players on Wall Street thought that money could buy them if and when Clinton ran for President; or (b) the speeches laid out a defense of Wall Street greed so passionate and total that hearing it uttered by a person of power and influence was worth every penny.

And the evidence from some of those who attended those speeches couldn't be more damning.

Goldman Sachs Employee #1 (present at one of the speeches)

“[The speech] was pretty glowing about [Goldman Sachs]. It’s so far from what she sounds like as a candidate now. It was like a ‘rah-rah’ speech. She sounded more like a Goldman Sachs managing director.”

Goldman Sachs Employee #2 (present at one of the speeches)

“In this environment, [what she said to us at Goldman Sachs] could be made to look really bad.”

“Mrs. Clinton didn’t single out bankers or any other group for causing the 2008 financial crisis. Instead, she effectively said, ‘We’re all in this together, we’ve got to find our way out of it together.’”

Or set her further apart from a candidate like Sanders. 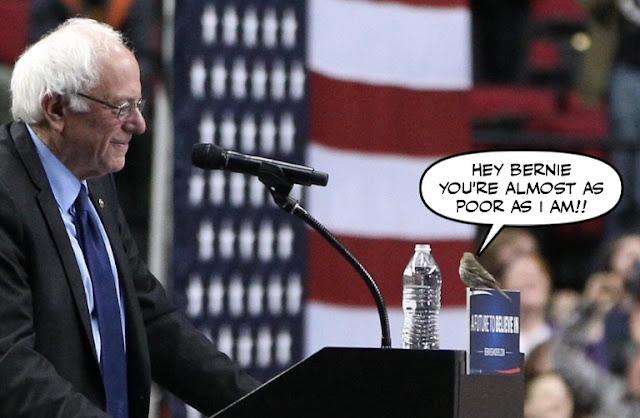 Bernie’s entire net worth, accumulated over his 74 years of life, is less than half of what Hillary Clinton made just in her speeches to Goldman Sachs. In 2013, Bernie’s net worth was estimated to be $330,000 — making him among the least wealthy U.S. Senators in the country.

Combined, Bill and Hillary Clinton have made $153 million in speaking fees alone. In just 2013, Hillary received an astounding $9.68 million from her paid speeches.

Or further apart from a campaign that is being financed by donations averaging $27 from millions of ordinary people.

And what Bill Clinton has to say in his wife's defence couldn't be more disgusting.

Bill Clinton joked Friday that Bernie Sanders' supporters would "shoot every third person on Wall Street" if given the chance, a riff on his broader defense of Hillary Clinton's economic record.

"One of the few things I really haven't enjoyed about this primary: I think it's fine that all these young students have been so enthusiastic for her opponent and (he) sounds so good: 'Just shoot every third person on Wall Street and everything will be fine.'"

For he is the last person to slander the idealism of so many... 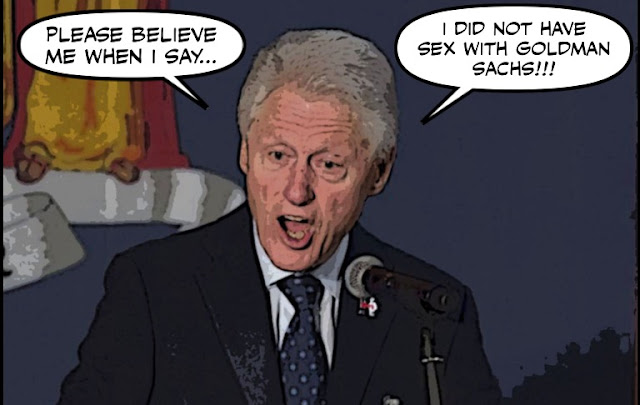 And all I can say is no wonder some Sanders' supporters showered Hillary's motorcade with one thousand one dollar bills in LA yesterday, after she left a fundraiser organized by the Hollywood elite.

And is one more reason why I'm supporting Bernie... 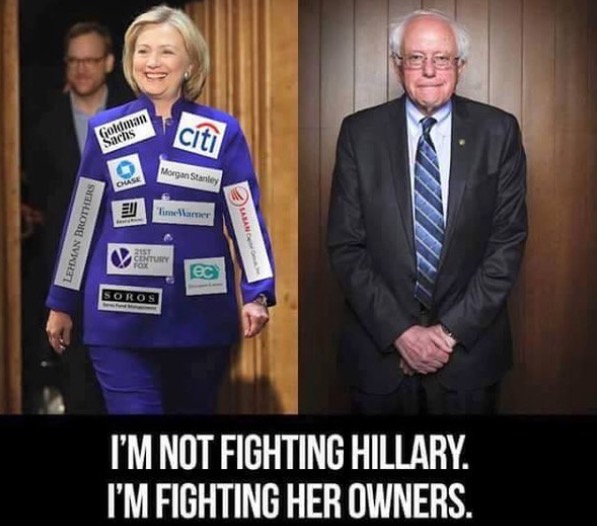 You know, Hillary does have some fine qualities, and I would love to see a woman in the White House.

But you can't solve a problem if you are part of the problem.

And only Bernie can deliver us from the greedy hogs who would buy themselves governments.

So they can devour us all...

'Just shoot every third person on Wall Street and everything will be fine.'"
Nonsense, Wall Street is not that smart.
Eradicate is the best idea.

The sooner the FBI throws an indictment against her, the better off the rest of the world will be.

You know, Hillary does have some fine qualities.....

Hilary = bad judgement. The email scandal is real. She was extremely reckless, and remains unapologetic. People in public office need to respect rules. Bending them for their own convenience is just a sign of bad character.

I have been wondering, Simon, since the Panama Papers, whether Hilary and Bill are partaking in tax havens. Now wouldn't that be an interesting revelation?

Hi jrkrideau...how about we just exile them all to a desert island and have them try to live off the land, or off each other. If you thought Lord of the Flies was scary, just wait for Cannibal Island... ;)

Hi Lorne...I didn't that, but it's my greatest fear. Hillary wins the nomination only to have some scandal hit her in mid campaign, and hand victory to the Republicans. When you consider that and the fact that Sanders fares better in match ups against both Trump and Cruz , I just hope that Democrats take all that into account....

Hi anon...well maybe it's just my reflexive Canadian politeness, I just can't help trying to say something nice about just about anybody. But seriously she must have some qualities if so many support her. She is a feminist model for many older women, and surviving the onslaught of misogyny aimed at her by the Tea Bagger mob does earn her a couple of points in my book. But I just think in a time like this, and with her record of snuggling up to the banks, she's not the right person to be running for President....

Hi T.S....I am shocked by the amount of money the Clinton's have made in the last few years. To me it's just pure greed, and the greedy are the ones who get into trouble. As I told Lorne I fear what might happen if she is hit by scandal in the middle of the general election campaign. She is the wrong candidate for the times we live in, and I think that last pic does sum up the situation...

don't think its a big deal for her to made money speaking at these types of events. Its become the way of the world. Its how politicians make money once they have left office. If they make a lot of money at it, that is fine by me, as long as they pay their taxes on it. At one time Clinton was one of the highest paid litigators in the U.S.A.

It doesn't matter that much, who is President. most of what effects people's lives is controlled by Congress, the Senate, and the State governments. Voter suppression starts in the States. Yes, its better to have a progressive good President than a bad, Republican, but if we wake up to a Clinton Presidency, lets just be glad its not a Republican Presidency.

There is no reason Clinton needs to make these speeches public. she wasn't paid by the public. She was paid by corporations. One could argue its work product for an employer. Speakers tend to slant their speeches for their audience. Lets not throw the baby out with the bath water, comes to mind.

People might want to remember if they do a "really good job" on Clinton and she goes on to be the nonomine, she might loose to one of those Republicans and then we have only ourselves to thank.

Ha, I was wondering the same thing. What fine qualities? Clinton is a reprehensible lying panderer who will do anything to get elected.

That is absolute folly. Of course there are reasons. You cannot run on a campaign stolen from Sanders to take down the banks when you yourself have been paid handsomely to support them. She is a proven warmonger and by far the most right win "democrat" to run. She is also a shameless liar and a complete and total corporate shrill. There is literal blood on her hands. She is a horrible human being with zero progressive qualities and no one, and I mean no one on the left would ever think or believe she will do a single thing for anyone who did not line her pockets. Look into her Clinton Foundation and the other "charities" she uses to funnel cash and favours. There is an excellent article here: http://www.dailykos.com/story/2016/2/22/1489185/-The-Definitive-Encyclopedic-Case-For-Why-Hillary-Clinton-is-the-Wrong-Choice

I highly suggest you read it. Clinton is to the right of Trump on some issues. Fact.